Mario Kart 8 Deluxe is not just an edition that summarizes in a single formula all the material published with the eighth episode of the series. Mario Kart 8 Deluxe is, in a certain sense, also the edition that condenses everything seen in this arcade racing series from Nintendo.
When it debuted in 2014 on WiiU, in fact, it took up several innovations introduced by the two previous titles, such as the Mario Kart Wii motorcycles and the Mario Kart 7 hang gliders for 3DS. This re-release for Switch, however, is not limited to combining the original game and its Dlc, but further refines and files some aspects of the playability, also adding the transport of two objects, similar to Double Dash on GameCube.

On the content front, however, there are several new features, in order not to fall into the list it is enough to mention that five out of eight arenas of the battle mode are now custom designed, among the usable objects there are also the feather and the Boo, pieces of kart and new characters , as well as an additional level of mini turbo. There are also the twelve circuits distributed in the two dlc released on WiiU (now reaching about thirty), the extra characters and the 200cc mode for the experts.
We therefore come to bring together many of the characteristic aspects seen from 2003 to today, in a chapter that for many fans will be very similar to a review, a Mario Kart 8.5 in short, more than a trivial GOTY.

Starting by focusing on this aspect may be unusual for some, but perhaps useful, as the playful formula of Mario Kart, in its essence, has remained unchanged. Dedicating a preamble to the gameplay that is now very clear even to non-Nintendo fans, could have sounded redundant. On the contrary, the doubt that instead may be more legitimate is whether this edition can be worth the double outlay by those who have already purchased on WiiU, therefore it is useful to evaluate first of all the great unknown that the simple postfix "Deluxe" struggles to clarify. .
The addition of portability is certainly a good added value for a title that lends itself to a few games of pure disengagement, without requiring long sessions.

The release of this Deluxe on Switch now makes Mario Kart 7 superfluous and underlines the obsolescence of the 3DS, which was previously the only console to play outside of the home with classics from the Nintendo portfolio such as Mario Kart or Smash Bros. Being almost a he summary edition of the series also adds some further stimulus even for veterans who have already played eighth on WiiU, especially if the two dlc have not been tried.
There are few cases in which not to recommend the purchase of Mario Kart 8 Deluxe. Perhaps right those who have abundantly stripped both game and dlc in the previous version, could accuse a sense of repetition and redundancy, but for all the others there is certainly something more.

Having clarified this, it is possible to enter into an evaluation linked to the game itself, perhaps repeating something that may already be known. The basic framework at the bottom is still that of Mario Kart 8 and for this reason we have chosen to keep the numbering, just as the “8 smooth” itself did not differ from the aspects that have made the series appreciable from 1992 to today.
The strong point in fact remains the same simple and immediate gameplay, but in any case with its own depth, such as to allow the game to be approached by more occasional users, as well as to be scalable even by those who want to dedicate many games to improve their performance.

Perhaps among all the past chapters it is precisely here that we see an ever greater refinement in combining simplicity of use, but elaboration in the use of the turbo and drifting. The further small filings made in the Deluxe make themselves felt and manifest a search for driveability and a style of use that does not want to be superficial just because it is arcade. On the contrary, it almost seems to refer to the arcade racing games with a realistic cut of the 90s, which took great care of this aspect, even without falling into the simulation.
However, it is possible to use an assisted guide, to meet beginners, but this function is stemmed from abusing it by the prohibition of reaching the third turbo, rewarding those who do not use automatic advantages. The same bikes imported from the chapter for Wii have been rebalanced, to avoid them being too strong to use them in wheelies. The possibility of carrying two objects at times weighs things down however, as the number of accessories is now richer than in Double Dash and some combinations could become real barricades to engulf the game in half of the contenders, if you use one behind the other.

The modes in which to play are different and in addition to the simple championships you can select Balloon Battle, Guard and Thieves, Bob-Omba, Coin Catcher and Steal the Sun. Each of these adds its own rules that make the games more varied and give a good overall variety. It is true that the Mario Kart formula is already sparkling by itself compared to the classic driving games, however it is also true that it has never undergone radical changes and that some might feel a hint of repetitiveness. Which is why the aforementioned options refresh everything to keep the multiplayer experience, both online and locally, always compelling.

The eighth chapter, however, has tried since its debut to propose something that does not leave the game mechanics in the static and the presence of gravitational sections adds some nice brackets along the tracks. In several points the normal flow of the race is distorted with respect to the linearity required by physics and in addition to looking for the usual shortcuts, you can launch yourself into passages that almost wink at F-Zero (another series of arcade racing that Nintendo has inexplicably put away and shamefully for fifteen years in the closet of unused IPs and that it would be great to see them come back). Quads add to the range of usable vehicles and carve out a space with their driving characteristics, compared to motorbikes and karts.

Graphically instead it must be noted that we are facing a title of the last generation of consoles, moreover one that did not try to produce itself in an elaborate cosmetics, but which focused a lot on style and bright colors to cover a clear graphic simplicity..
When Mario Kart 8 came out in 2014 it already seemed very essential. In fact, other arcade games on Playstation3 and Xbox360 did not settle on the fact that they were not simulators and even without perhaps equaling the illustrious competitors, they still tried to greatly enrich the definition and details of the tracks and environments (just think of Split / Second or Ridge Racer Unbounded).
Mario Kart, on the other hand, in several passages has extremely poor and sparse textures, maintaining a general effect made pleasant thanks to the bright and lively coloring, creating chromatic shades that make the polygonal detail overshadow during the speed phases. However, the absence of an anti-aliasing filter is noticeable.

The title also does not correct the drop in frames in multiplayer either. In fact, if playing alone or in pairs, the frequency remains anchored to 60 frames per second on 1080p resolution (compared to the previous 720p), when a third and fourth user enter, the drop brings everything to 30 frames, making itself noticed and impacting on the gameplay itself.
Although certainly the listed improvements have pleased us, it would perhaps have been useful to guarantee 60fps in all situations, not only because we are dealing with a title based on dated hardware, but also because of the strong multiplayer appeal on which it is based. Mario Kart, both locally and online.
While graphics are not the driving force behind a game of this type, it is also true that in recent years we have seen wonderful examples of cardboard cosmetics games embellished with better quality textures, lighting effects or cel shading even on productions. medium level.

Mario Kart 8 Deluxe includes the base game already released on WiiU with both DLCs. In addition, new tracks have been added, new drivers have been added and further improvements have been made to the gameplay. 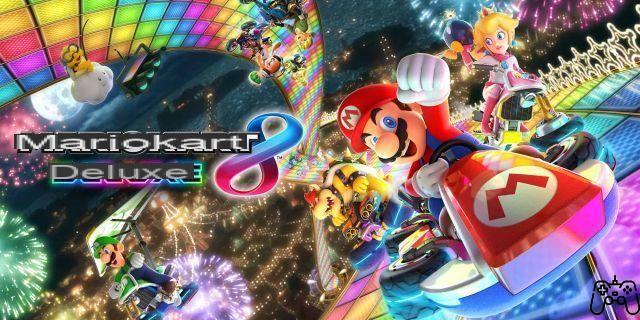 The graphics are affected by the now outdated hardware on which Mario Kart8 was originally developed, finding itself today, even more than at its debut, below standards. Color saturation is maximized to create very bright colors, however this expedient is often used to hide poorly defined textures, focusing everything on the flamboyant color palette. While this aspect is less evident during the action, just pause the game and observe the backdrops and polygonal models to notice a poverty of detail that already in 2014 was lagging behind other arcade driving titles. It also lacks an anti-aliasing filter. Although the overall whole is still pleasant and marginal, in this type, it would be reasonable to expect more from Nintendo. The collapse of fluidity to 30 frames per second, when adding a third and fourth player, also penalizes the multiplayer experience in practical terms.

The music is always very nice and pleasant, however in this respect there is no search for particularly innovative sounds, to the point that many music are already heard in other chapters of the series. The sound effects are still fun, representing well the typical verses of each character who acts as a pilot.

Mario Kart 8 Deluxe is a compendium of everything experienced in the various chapters of the series over the past 15 years. The title lends itself well to single or multiplayer games, both long and short sessions, always being fresh and fun like maintaining a classic that makes playability its strong point. The inclusion of new elements, as well as improvements to the mechanics already present, enhance the already excellent results of the previous edition.

Did you like the article? Share it!
Audio Video Mario Kart 8 Deluxe
In love school with Dr. Hakim in It Takes Two! ❯