Write something about Metal Gear Survive it is quite difficult. The game since its announcement has been studded with negative criticism from historical fans of the Metal Gear Solid saga, as it is the first made by Konami after the separation from Hideo Kojima. I will not go into the details of this split, which certainly marked the end of the Metal Gear brand as we know it, or an extension of the (authorial) mind of the good Kojima. What matters is the Metal Gear Survive product, understanding what we have in our hands, without starting biased or doing conspiracy.

The game is set in an alternate timeline that begins after the end of Metal Gear Solid: Ground Zeroes. The destruction of Mother Base is only the beginning, as an interdimensional portal opens up above it and begins to suck up its remains. We will soon discover that this space-time tunnel overlooks a parallel dimension that the American government is aware of, nicknamed Dite, as the city that is the entrance to the darkest part of Dante Alighieri's Hell.

Dite is inhabited by strange zombie-like beings, the Wanderers, made of a particular crystal, called Kuban. The Kuban can be used as an energy source and the United States has in the past sent teams to recover it. The last one is gone, their name? Corpi di Caronte obviously, the references to Dante are continuous. We will be asked to create a character who will go solo to Dite to recover the missing special bodies and together with them accumulate as much Kuban energy as possible. And here is that once the fundamental information has been given out, the game is delivered to us, opening up to pure gameplay, without the myriads of interruptions to which Hideo Kojima has always accustomed us. And the nature of the title is revealed immediately: Metal Gear Survive (nomen omen) is a survival game with stealth elements, taken hand in hand with the series from which it derives.

The heart of Metal Gear Survive is the Base Camp, to be modified and upgraded using the resources and what we find inside Dite. The game world, as already mentioned, is infested with Wanderers (but not only that, there are other monstrous creatures that we will face) who are the main danger. It's about moving silently and eliminating them without being discovered. The protagonist has parameters of hunger, thirst and resistance to always keep an eye on, which have the bad habit of falling steeply, perhaps sometimes too quickly, making moving around the maps frustrating at times. The rest of the gameplay is borrowed from the original Metal Gear Solid V, as well as the graphics engine, scenarios and animations.. Although the recycling work is therefore evident, in the same way there is a considerable effort of artistic characterization of the playing areas.

Tell is a silent and disturbing world. It is dark and parts of it are completely shrouded in dust, a strange toxic fog. And believe me, wandering around the meanders of the Wanderers dimension puts a lot of anxiety and the horror component of the game amply does its duty. Also because in the Dust the minimap does not work, and it is not even possible to consult it in the menu. We are alone, with our previous knowledge of the area and our ability to consult the compass.

The other fundamental component of Metal Gear Survive is that of defense from the hordes. Whether it's protecting the base camp or a digger activated to extract Kuban energy, we will often find ourselves having to manage waves of Wanderers who aim to destroy all our work. These are the most difficult moments of the game, where a lot of patience and strategic skills are required to spare the defenses and administer them during the various waves, as well as ammunition. While the timer runs relentlessly you have to place nets, barbed wire, mines, trying to arrive alive when time runs out.

Everything in the game must be created, from barricades to individual bullets; all objects that can be carried with you in limited doses, transforming every sortie from base camp into a real challenge. The game does not take care of the player at all and it is not difficult to imagine that many can abandon it, for this reason. Also because the main campaign is in fact a gigantic tutorial, which in about forty hours accompanies us slowly in all the facets of the survive nature of the game. Only at the end of the credits does it open completely and the player is asked to administer the base built up to that point and survive as long as possible. So naked survival fans will have to wait a lot before they can get their hands on what could be called the actual game.

On the other hand, the lack of content in Online Mode is surprising. At its announcement, it seemed that the title was to be a practically only multiplayer game, instead currently the things that the multiplayer mode offers are few, limiting itself to the horde mechanics seen in the single-player campaign, only declined to multiple players. Surely it is worth trying the multi missions because they are rich in resources, which once recovered can be used in the main game. And you get a lot of them, a number such that they are almost unbalanced compared to those found in single, so much so that the thing to learn to do right away is to exploit the multiplayer to accumulate goods with which to facilitate life in the main campaign. However, it seems clear how this relegates online to a mere place where you can stock up on stuff and then continue more quickly on your own.

The plot mixes horror and political fiction, even if the script practically never reaches the peaks to which the series has accustomed us, preferring to get sideways, with sporadic cutscenes and lots of dialogue on the radio. The absence of Kojima is felt, then? Absolutely, the narration is rather poor, the direction almost always anonymous, except in some particular film that takes up the Kojimian flicks of The Phantom Pain. But the themes dealt with in the game do not clash with those to which the creator of the saga has accustomed us over the years, only the staging changes, certainly poorer also due to the smaller nature of the project.

Metal Gear Survive, however, proves to be a solid and pleasant survival to play, as long as you overcome the obstacle of the long initial part. Detractors must come to terms with the fact that the game is good; is a spin off of the series, as there are already several developed when Kojima was still in Konami, with a particular look and something to say to those who know how not to stop at prejudices.

Ultimately Metal Gear Survive is a good survival game, despite having to contend with the enormous weight of the name it bears. There are imperfections here and there, a certain repetition of situations and an unbalanced difficulty; but in general it is fun and engaging, proposing a large amount of tasks to be completed, mixing stealth with elements of action horror. Entering the perspective of the spin-off of the series and stripped of any kind of preconception, we find ourselves with a solid and dignified survival game.

I played Metal Gear Survive with a physical copy, on a PlayStation 4 Pro. In about forty hours I completed the main campaign, also completing a few side missions and playing online (mostly to help me collect materials for single player mode). 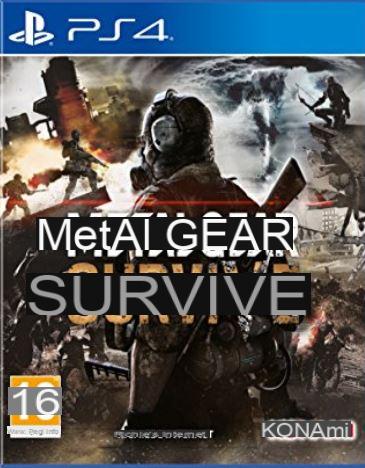 Of course the game largely takes up everything that Metal Gear Solid V: The Phantom Pain had to offer. However, everything that has been added creaks, denoting an incomplete mastery of the Fox Engine, the graphic engine. The stylistic side is very well cared for, which mixes the classic look of the series with sometimes even innovative horror tones.

The soundtrack takes a lot from Metal Gear Solid V: The Phantom Pain, but also offers new tracks that stand out for their personality. The actors are sometimes too didactic in their interpretation, but it is commendable that every dialogue is entirely voiced.

The game takes many mechanics from Metal Gear Solid V: The Phantom Pain, taking away some and adding something of its own. However, the mechanics added suffer the most, some controls should be revised and situations tend to repeat themselves too often. The survival system linked to the character (hunger, thirst, fatigue) is sometimes frustrating.

Did you like the article? Share it!
Audio Video Metal Gear Survive
How to unlock Leatherface in Modern Warfare ❯