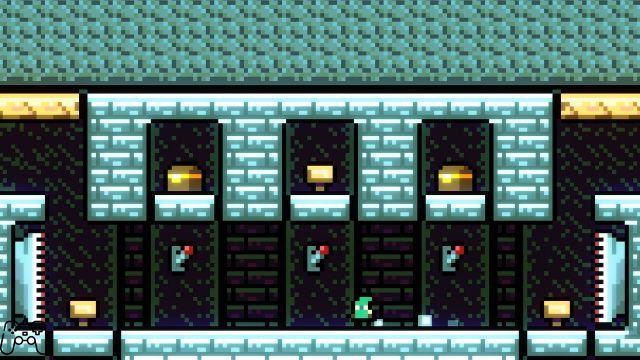 How beautiful it is, in an indie market increasingly aimed at graphic improvement and competition with AAA products, go back in time to enjoy a title from retro style and strong of a great (and brilliant) basic idea?!

If your answer is "a lot" then you are reading the right review, because, after being released on PC on June 4th, Reventure finally approves its Nintendo Switch! Are you ready to take on the role of a noble hero to save the princess and defeat the forces of evil ?! Find out with us why, if Link and Super Mario existed in the world created by the guys from pixelatto, they would surely be dead or, at best, seriously injured!

Reventure: a link to the past

The story of Reventure is the most classic and stereotyped one can think of, with our hero (whose name we can choose) who will be forced to save the princess from the evil kidnapper of the moment and, during his journey, groped to defeat the dark forces that grip the Kingdom. What turns out to be brilliant, however, is the method with which the Spanish software house has decided to tell our deeds, taking stereotypes of the genre and turning them inside out like the dirtiest pair of socks.

In fact, once our Joycons are held, we will have total freedom of choice on how to move within the simple narrative plot. We can go back to bed, leaving the Kingdom to its sad fate. We can kill the king and usurp the throne. We can (but here it risks becoming banal) follow the stereotypes and, sword in hand, set out in search of the lovable kidnapped girl. Freedom, in the Pixelatto title, is the key to everything and final hundred available are the result of such attention on the part of the development team. To glue this variety of situations is the biting humor that permeates the entire production. This element, not to be underestimated, manages to project a constant smile on the player's face, who, as in the best collection of comic strips, will not wait to "read" the next situation conceived by the authors.

Making a videogame product with a strong humorous connotation is by no means an easy job, but we can say that the Spanish team has done it great, proving not only a great writing skill, but also a considerable knowledge of the narrative topoi of the fantasy genre.

However, at first glance, Reventure it may seem like a Roguelike title, in truth there are some aspects that do not make it fall within this videogame genre. First of all, it is not certain that the protagonist will be killed when an ending is reached, But especially the game environment is not procedurally generated, making the title take a turn more similar to that of an absurd puzzle game, where you try and try again to overcome a certain obstacle. To go beyond certain areas, in fact, sometimes it will be necessary to sacrifice one of your games, in order to activate events which, at the next iteration, will give you the possibility to proceed towards the next zone. We realize that it may seem a bit cryptic, but we don't want to go into more detail so as not to ruin the gaming experience, which is really satisfying especially when you are faced with certain "environmental puzzles".

If in the paragraph dedicated to the narration we praised the 100 endings for the refinement of the writing, we would like to repeat the compliments for the great gameplay ideas that hide behind some absurd conclusions of our history. Conclusions that, if completed 100%, will not only give access to the real ending of the game, but which can also be considered a sort of collectible, adding a playful aspect to the production and encouraging players to “collect them all”.

Finally, let's not hide that we saw it gameplay style close to 2D platformers, Reventure marries perfectly with the hybrid nature of Nintendo Switch. While playing on the TV can sometimes be confusing, given the size of the pixels, it is in portable mode that the Pixelatto title gives the greatest satisfaction.

In the small barrel there is good wine

From a technical point of view, Reventure is a product with a simple style, but perfectly functional with the language it uses. The pixels that make up every single aspect of the game, in fact, are always in the right place, at the right time, managing not only to give a unique touch to the production at certain times, but exploiting the cultural background of the developers to stage some citations and references to other titles that are extremely enjoyable.

The same goes for the audio sector, which works, never bores and manages to convey the typical atmosphere of the times of The Legend of Zelda: Link's Awakening (not the remake, of course). Interesting clarification: Reventure is fully translated (and perfectly adapted) in Italian, making it understandable to anyone who decides to approach his crazy fantasy world.

Reventure is a little gem, which we sincerely feel to recommend to all video game enthusiasts from the XNUMXs onwards. The basic idea is to be considered on the verge of genius and goes beautifully with a playful side that is as simple as it is fun. And if you love pixel art, then the Pixelatto title will turn out to be a must have for you. Given the low cost (9.99 €), Reventure is the kind of product that should be inside any Nintendo Switch, whether it's to have a quick game every now and then or to hand the console to your friends, challenging them to find the most fun way to end our legendary hero's quest.

We played Reventure for hours on end, in both portable and docked modes, much preferring the former. As already reported in the course of the review, Reventure is available for PC and Nintendo Switch at the modest cost of € 9.99.

A Pixel Art as simple as it is functional is the basis of the work of the Pixelatto guys. Reventure, without particular special effects, always manages to entertain and, thanks to a great cultural background from the developers, uses its visual style to stage references and quotes from the videogame past. If you are a lover of eighties titles, you can only love the work done by the Spanish software house.

Reventure presents a soundtrack that manages to be appreciated especially during the game, changing from area to area and following the deeds of the protagonist, but which does not look bad in its own playlist on Spotify. The work done by the composers is certainly accurate and, above all, perfectly in line with the rest of the production.

We say it without particular problems: Reventure is, narratively and playfully, brilliant. The basic idea is not only very original, but it is the humor that permeates the story and the gameplay that reigns supreme in this Pixelatto production. The game is fun, entertaining and, when played on Nintendo Switch in portable mode, it manages to give the best of itself. In a nutshell: Reventure is a once in a lifetime game that everyone should play.

Did you like the article? Share it!
Audio Video Reventure (Nintendo Switch) - Live, die, repeat
Call of Duty: World at War - Trucchi ❯