Have you ever woken up from a dream with that pleasant illusion that it was real? A strange mixture of arousal and wakefulness, synaesthesia of the senses and actualized unconscious were the emotional responses that I brought with me once Sayonara Wild Heart was concluded: an interactive dream lasting about two hours between hallucinogenic forests, dystopian cities, tarot cards and virtual realities to the rhythm of electronic music.

Released months ago on Playstation 4, Nintendo Switch, Apple Arcade, and only later on PC, Sayonara Wild Hearts is the new product of Simogo, a Swedish studio composed of only two members certainly not new to the world of development, especially on mobile platforms. With the financial help of publisher Annapurna Interactive, the developers have enjoyed four long years to conceive their best work so far. Graced by a simple narrative, but that knows how to give some emotion, Sayonara Wild Heart is in its playful component a rail shooter with elements of a rhytm game that is mechanically very simple. Indeed, the quality of the playful experience is what is least exciting about the title. Taking a cue from classics like Sin & Punishment and Star Fox, Sayonara Wild Hearts offers twenty levels in which to avoid obstacles, collect hearts and occasionally fight some enemies, all while chasing the final score with a ranking so dear to the genre. This simplicity has the positive side of having made the title an experience suitable for anyone, as there are no major obstacles to completing the levels. In fact, even if you get stuck in some section, the game elegantly proposes to skip the critical moment for the next one.


An album to be listened to immediately

The beating heart of the title is clearly the sound accompaniment. The undersigned does not consider himself an expert in electronic music, but Sayonara Wild Hearts could very well act as a gateway to the genre for anyone, so it is impossible not to be fascinated by the work. The two hours go smoothly in a whirlwind of genres that alternate between dubstep and dream pop with a quantity of sound effects that accompany the truly incredible visual responses. Absolutely a must to listen to all the tracks of the album, the links of which you can find later in the article. Wanting to nitpick, I found it very questionable the choice of not proposing the levels directly one after the other to the first game which instead constantly brings the player back to the screen for their selection. The icing on the cake of the sound show of the title is the dubbing of Queen Latifah which fills the narrated parts with warmth and expression. 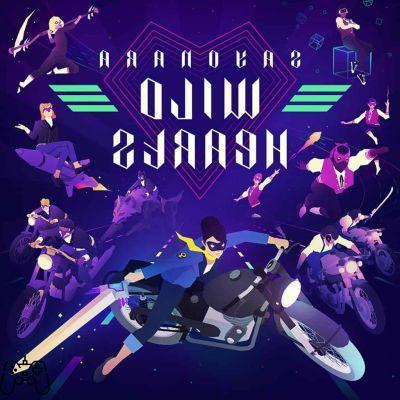 Another big brick in Simogo's peculiar construction is the art direction - it is no coincidence that we awarded the title with the fifth place in the ranking of games with the best art direction of 2019. Saturated, dreamy and sprinkled with neon contrasts, every image that Sayonara Wild Hearts gives to the player is the result of an excellent research and creation of a visual richness that never limits the legibility of the scenario and the direction to take. The dark shades are always tinged with a purple or blue that avoids plunging the backdrops into excessive darkness, and the strong contrasts with the interactive elements of the scenario are enhanced by technically simple, but artistically effective effect. Quite distinctive typography and wireframe illustrations complete an excellent artistic framework, supported on Nintendo Switch by 60 FPS at the maximum resolution of 720p portable and 1080p on Dock.

Sayonara Wild Hearts is a difficult title to judge: it could bewitch you and make you hallucinate by the wonder of its audio-visual synchrony or it could leave you amused on average by the basicity of its game mechanics. Ultimately, what matters is to evaluate the success or failure of the enterprise, declared by its developer, of translating a pop music album into an arcade video game and the answer is yes: the task is fully achieved.

While not particularly innovative in its cosmetics, Sayonara Wild Hearts is an excellent example of an almost texture-less aesthetic, with a vector flavor with perfect readability despite the amount of elements on the screen.

Leaving aside the important factor of personal taste, Sayonara Wild Hearts is a title built on his music and you can see it, or rather, you can hear it. The magical electronic sounds are complemented by the warm and authentic dubbing of Queen Latifah.

Those looking for a great challenge or innovative gameplay in Sayonara Wild Hearts may be disappointed. The title can be played easily by anyone, but it is certainly not the gameplay that leaves its mark.

Did you like the article? Share it!
Audio Video Sayonara Wild Hearts - Interactive Dream
How to catch Explorer Pikachu during the Secrets of the Jungle event in Pokémon Go ❯