The first season of Altered Carbon he hadn't convinced me.
Netflix's attempt to bring a science fiction serial product to its catalog, while laudable in its intentions, had proved not entirely successful at the proof of the facts. The fault of a really too frayed writing and an unbalanced staging on the action rather than on the thematic study.

A pity, since the narrative premises of the world created by the English writer Richard K Morgan they have tremendous potential.
We are, for the uninitiated, around the year 2384 and humanity has substantially defeated death thanks to the invention of the so-called cortical stack, a small device implanted at the base of the neck and containing the individual's entire consciousness.
If the body dies, in fact, the battery can be transferred to a new "custody", in practice a new body to inhabit, thus extending the life of those who can afford this procedure.

Two years later, therefore, the showrunner Laeta Kalogridis try to fix the shot with a new cycle of episodes and with a new case for the protagonist Takeshi Kovacs, now played by Anthony Mackie (the MCU Falcon) replacing Joel Kinnaman.

It's been about fifty years since the events of the first season and Takeshi Kovacs is desperately searching for his lost love, Source Crist Falconer, leader of the revolt against the Protectorate and inventor of the cortical pile.
His search will take him to Harlan's World, the planet where Kovacs met Falconer and which we learned about in the numerous and grueling flashbacks of the first season.
Here one of the Meth of the planet, worried for its own safety, will ask the last Spedi for protection in exchange for a new and technologically advanced custody. But soon Kovacs will discover that all the most powerful Meth on the planet, the so-called "founding fathers", are in danger as the object of a merciless revenge whose origin is perhaps older than humanity itself.

The change of setting, in addition to a new narrative line, leads us to the discovery of new supporting actors and antagonists.
Among these, the bounty hunter undoubtedly stands out Stairs, played by an excellent Simone missick, a face known to Netflix audiences for playing the character of Misty Knight in the Luke Cage series. Fighting but maternal, Trepp is certainly the most interesting new entry in the package and would probably have deserved greater centrality in the story.

The two antagonists of this second season are not very convincing

The two main antagonists are less convincing. The Colonel Carrera, an old acquaintance of Kovacs in the days of the protectorate militia, played by Torben Liebrecht, is all in all convincing in the entirety of the narrative arc assigned to the character, although Liebrecht's character actor interpretation is at times too charged.

Instead, the character of Danica Harlan, governor of Harlan's World played by the charming Lela loren, which always gives the unpleasant feeling of being "bad" without any real reasons. A character who certainly deserved more attention in the writing phase.

Unfortunately, the Quellcrist Falconer from Renèe Elise Goldsberry, also in this case perhaps more for a sloppiness of writing than for a lack of interpretation.

Back, to the delight of all fans of the first season, the artificial intelligence Poe played by Chris Conner, now much more central to the events and best-written characters of the season. Probably the one with whom you will establish the most empathy.

Finally, Meckie's new Kovacs works and, at least for myself, doesn't make you miss Kinnaman too much. Of course, thinking of the same character with different faces is tiring, but after all, the concept behind Altered Carbon foresees it (in spite of the complaints of some keyboard lions) and Meckie offers a credible performance and in line with the character. 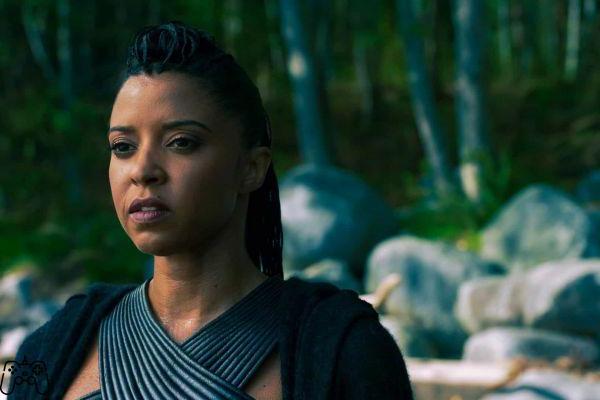 Among the notes of merit we must certainly include a finally found narrative compactness.

Unfortunately this second season, like the first, has excellent elements and quite avoidable slips.
Among the notes of merit, one finally found must certainly be counted narrative compactness. The endless digressions of the first season are a distant memory and the space dedicated to the protagonists' past and secondary storylines is decidedly limited. Everything is more organic and understandable and the lower number of episodes (eight, two less than season one) helps in this sense.

On the other hand, the writing lacks a lot of originality. We start from a premise similar to that of last season, namely the murder of a meth, and then pile up a series of sci-fi clichés thrown in bulk, from Matrix ad Alien.
In general, the writing is lazy and one gets the impression that the themes of the original work are not adequately explored and exploited.

Probably we tried not to burden the product with merely explanatory scenes of the context, as happened in season one, but we exaggerated in the opposite direction and now there is an annoying feeling of disconnect between the plot and the universe told. A real pity, then, that it was not decided to push more on the psychological study of the protagonists rather than on the sociological and anthropological aspects of the world represented.

Among the positive notes, however, the action scenes and fights, choreographed in an exemplary way in most cases and now less frequent and spurious than in the past. The choice not to exacerbate, as in the past, the use of torture scenes is also definitely appreciable. 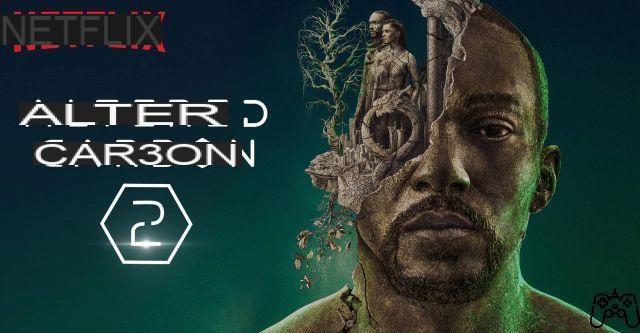 I've seen things about it that you humans couldn't imagine

Visual impact is vital to any sci-fi world you decide to bring to the screen. From Blade Runner a Ghost in the Shell, from Tron a Strage Days, the aesthetic characterization plays a fundamental role in identifying that particular narrative universe.
From this point of view, even in this second iteration, Altered Carbon fails to stand out particularly.

The artistic direction does not fully convince in fact and, also due to a fluctuating productive value to say the least, an unpleasant feeling of "fake" often hovers in the sets and costumes. This, in some circumstances, ends up undermining the fruition pact with the viewer.

There would have been a need for another level of budget

Direction and photography are also discontinuous and mostly scholastic, as are the visual effects that sometimes do not convince at all.
In general, there is the feeling that a product of this type would need a higher budget to be able to perform at its best.

Overall this second season of Altered Carbon tries to fix the shot without succeeding all the way. It solves some structural problems of the first season but does not make that leap in quality that the original work deserves.

It remains a light and enjoyable product. However, the action heart of the product does not do justice to the interesting social issues of this particular cyberpunk world and, in general, one gets the impression of being in the presence of a project aimed at a public not too interested in anthropological disquisitions. asimoviano.

A real shame given the almost total absence of similar products on the small screen.

Review of videogamingallday.com Did you like the article? Share it!
Audio Video Altered Carbon 2, the return of Takeshi Kovacs
Elden Ring, Closed Beta: dates and times, how to participate and everything you need to know ❯

add a comment of Altered Carbon 2, the return of Takeshi Kovacs