It was hard to decide to get back on the streets of Paradise City. I think it's normal, that it happens to anyone who gets the remastered of a game like Burnout that he spent whole months on almost ten years ago. Will the adaptation bring about any improvements? How has the gameplay aged? Will he still be able to involve me? And the graphics engine? Questions to which I usually want to find an answer "before" buying it, for the second or third time, and not just to obviate the fear of spoiling the memory.

Burnout Paradise owes its fortune to two factors: a freely explorable map and an arcade driving system based on the principles of adrenaline, immediacy and spectacularization, at the expense of any realism. In summary, you are catapulted into a city of rather small dimensions, with a road network full of straight four-lane roads, without particularly narrow curves, but full of an infinite number of shortcuts, often filled with ramps to be taken at the maximum possible speed.

Everything happens without pauses, in a context made up of challenges at every intersection that can be activated with just the press of two buttons.

The absence of the speedometer reflects a precise choice of game design, namely that of not returning the sense of acceleration through a numerical value, but through the physics of the car, launched into a mad rush with no navigator to follow or circuit to repeat, while the contours of the game world fade to the side of the road. In offline mode the classic competitions against NPCs are secondary, especially by virtue of a much wider play offer that includes events in which you have to perform acrobatic jumps, others in which the winner is whoever throws off more opponents without being destroyed, or still reaching the finish line chased by enemies who have the sole objective of preventing it and a sort of racing lap declined for each car. All this takes place without pauses, in a context made up of challenges at every intersection, without any menus, which can be activated by simply pressing two buttons.

The fleet has no licenses, and alongside the special ones that are now modeled after models made famous by the cinema or the more extreme and exotic ones such as dune buggies, there are three types of cars: aggressive and massive, fast ones and those for stunt driving, each of which features a different road holding and turbo management. Since this is the review of a remastered, it makes no sense to dwell too much on the mechanics of the boost concatenation or how to get into burnout by giving it the bottom, just as it is only right to mention the presence of a limited number of service stations, workshops and junkyards where charge it, repair or change the car, including the color. However, it must be emphasized that these hotspots are scattered throughout Paradise City and must be discovered one by one, thus fueling the desire to explore a city with very little traffic and without a grid of objectives other than to accumulate victory points to unlock licenses and new racing cars - and there are about a hundred.

This sense of freedom remained unchanged and captivating, despite so many years have passed since its conceptualization. The adrenaline flows undisturbed as you whiz at full throttle just to browse and be distracted by a ramp that promises an acrobatic jump, rather than exploring an area that is still untouched or picking up some collectibles such as gates to break through and billboards to tear down. In the event of an accident, everything slows down to show the impact and its effects on the bodywork, while nothing can happen to the pilot as Criterion's choice was to completely eliminate them from the gameplay.

In the event of an accident, everything slows down to show the impact and its effects on the bodywork

Time about ten seconds and everything restarts, without consequences, often allowing the player to finish the competition successfully also thanks to a difficulty curve that is actually too soft. The summary of what has just been written is that Burnout Paradise is pure fun, with no stats to check or strategy: an automotive playground as was the Tony Hawk Pro Skater series for skateboarding, accompanied by a non-original soundtrack full of songs by famous artists and groups such as Avril Lavigne, Depeche Mode, Faith No More, Soundgarden and the same Guns N 'Roses that with their Paradise City welcome every start.

The revised and corrected version for next-generation consoles features 4K support with a stable 60 FPS; a feature not just considering that it is only the frenzy of the race that reigns supreme. However, it must be said that at the level of polygonal models and textures the game has aged. These factors have no influence on the quality of the entertainment offered, but any comparison with other arcades released recently is merciless. However, all DLCs released over the years are included, including the implementation of motorcycles, complete with riders who disappear in the event of a collision, the day / night cycle and Big Surf Island, an appendage of Paradise City with new collectibles, challenges, cars and even more spectacular routes. In this frame, retrieving a copy of the Criterion masterpiece is anything but nonsense, provided you are looking for an instant, no-nonsense arcade racing game. Among the few criticisms leveled at the remastered by the community is that of the failure to introduce fast travel, i.e. the possibility of catapulting into an area of ​​the map at will. I would like to point it out, even if in my opinion a recreational infrastructure so devoted to uninterrupted driving is not affected in any way. The offer closes with the inevitable online sector, which allows you to play together with seven other drivers taken at random or fished from the list of friends, obviously tracing the competitions of the offline mode.

I returned to Paradise City on PlayStation 4, thanks to a copy loaned by a friend. The unchanged gameplay and all special vehicles unlocked from the start allowed me to enjoy the Criterion experience from the very first start. 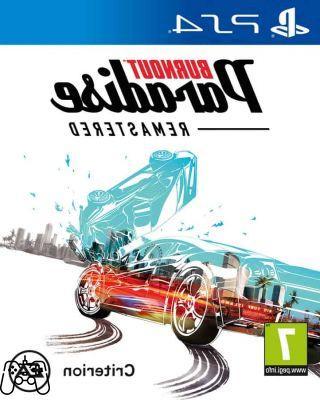 The remastered of the most classic arcade racing game set in an open-world returns to our 4K screens at 60 FPS guaranteed. The sensations of speed and adrenaline remain unchanged, as well as the absolute fun without thoughts and that freedom to explore a road network dotted with events at every intersection. However, this is a port that does not improve the original, if not in the technical aspects, also because the explosive gameplay of Burnout Paradise did not need to be retouched. If you are bored of settings and options, of realistic competitions and rankings, the Criterion masterpiece will offer you the right distraction at a budget price: how do you tell him no?

Support for 4K and 60 FPS granite counterbalance the polygonal models and textures that show all their age.

A non-original soundtrack of the highest quality, including songs by Avril Lavigne, Depeche Mode, Faith No More, Soundgarden and Guns N 'Roses.

An arcade racing game with no frills or strategies, which if it worked perfectly in 2008 today is similarly entertaining even if it lacks originality.

Did you like the article? Share it!
Audio Video Burnout Paradise Remastered
Can you catch a bright Azelf in Pokémon Go? - September 14, 2021 ❯