Captain Toad: Treasure Tracker, it's on the Switch, 3DS persino Wii U, it is powdered sugar on the player's life, a wedding favor full of level design sugared almonds, crunchy on the outside and with a soft heart, no less potential virtual panacea to cure the atrocities of certain humanity, gloomy and infamous precisely because it lacks this vitamin of good humor to be taken following a recipe by Nintendo . The active principle of its gameplay will massage your neurons and set them in motion, in a virtuous circle that will awaken endorphins ready to transfigure your face in a grimace of inadequate bliss, capable of making you radiant and contagious within a radius of 100 meters. Because the secret of the EAD work is as simple as it is therapeutic, it amuses in a very tender, comic way, relaxing but asking in return for attention, commitment and the will to take care of their kusamono by watering them with the holy water of completism.

Captain Toad starts from the puzzle platforming foundation of the beautiful Mario vs. Donkey Kong for Game Boy Advance - then shaped in the sequences of the sequels around the touch characteristics of the subsequent laptops - maintaining the spirit and the cerebral approach and then giving it a third dimension to mess around at will through the right analog and subtracting the not very relaxing time limits . Toad, a bit of an archaeologist and a bit of a Wario, is taken for a walk in terms of attraction for coins and diamonds, and at the same time the perspective of the tiny but very rich dioramas, handcrafted by the developers, peering into every corner to find the way to the iconic star, to a precious, to a secret that only our experience as players suggests exists. The real wonder is how these delightful ecosystems are infused with life, in constant motion and change. Unable to leave the game due to its cherry design, where one level leads to another, we will be constantly bombarded with new ideas, gimmicks, problems and solutions. Levers, valves, buttons, touch-sensitive mobile platforms (aided in dock mode by a convenient movement-sensitive pointer, while the touch screen is not so convenient in portability, especially for rotating the valves), are just some of the devices capable of overturning the morphology of the levels, threatened by all the Mariesque iconography that here allows itself new rhythms, new ways of annoying a hero who, poor thing, cannot compete in terms of agility with the ex-plumber who is now full-time.

The main problem lies in the huge backpack that he carries on his shoulder, making it impossible for him to jump and drastically reducing his running speed, going to stimulate a spirit of adaptation like a true Indiana Jones from the Mushroom Kingdom. Cunning and stealthy stealth escapes (be careful to turn off the light you carry around your head!), Turnips grown directly in the greenhouse of the Western Super Mario Bros. 2 thrown between head and neck at enemies, furious and uncontrollable pickaxes for moments of invulnerable vent, as well as to the evergreen breakneck escape. All these abilities and possibilities of action are tied to an artistic level design, that subtracts the leap to theorize a new and very fresh type of platform, which aims to stimulate cognitive skills more than reactive, making the title accessible for all and tasty for experts. The action-reaction concept that moves characters and scenarios is a perfect mechanical heart frosted with colors and animations that give pure joy. From the most common Goomba that will wince and frown as soon as Toad sees it, ready to pursue him, passing through the gigantic bosses Wingo and Draggadon (co-protagonists of the most memorable sections), rubbery, imposing, tacky and soft in threatening our safety, up to our irresistible heroes, the Captain and his soul mate Toadette, now frightened, now exultant with laughter, applause and spins. The influence that this tenderness has on the players is thaumaturgical, like when one remains hypnotized on some Instagram page looking at assorted kittens and puppies; these actors are all so expressive and charismatic that you can't believe it, and the feeling is that of being the directors of a delightful series of animated short films, wrapped in sets that draw heavily from the imagery of Super Mario 3D World (where Captain Toad and his newborn mechanics peeped between a level and a 'other) and its superb variety, compacting the locations to make a virtue of density. If it is true that some levels will be a bit more bare and forgettable, these rare stumbles are almost erased from memory to make room for the magnificent the rest of his architecture offers, not so much in terms of polygonal count but of detail, love, inventiveness, even self-celebration, with an absolutely sensational level inspired by the first Donkey Kong.

I replayed Captain Toad: Treasure Tracker on Switch, after having loved it at the time on Wii U, thanks to a code kindly offered by Nintendo, fueling me with joy and making me wonder what world it would be if everyone had a copy. Better, I say. 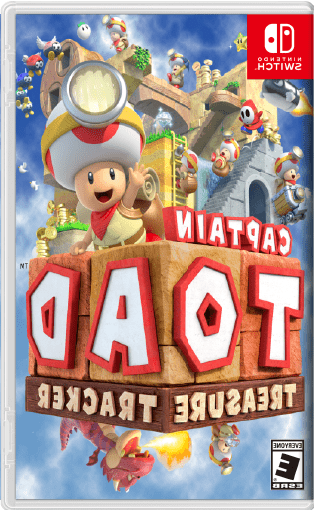 The real weakness of the production are the levels where Toad will find himself aboard a cart full of turnips, giving way to very bland and not very memorable “shooter” sections, fortunately rare, mostly born to make sense of the Wii U GamePad and its gyros. More than seventy levels divided into four pop-up books that on each page tell a new adventure, including kidnappings, gold coins and love, three main acts and a bonus one that contains the real and theoretically juicier novelty of this port, or i levels inspired by Super Mario Odyssey. Four, one of which is trolley-centric (argh!) And one to be tackled all in a hurry (another type of level, much more successful but all too classic compared to the rest), respectively inspired by the Kingdom of the Falls and the Kingdom of the Cookers, and I'm a bit sorry, because we can safely say that the jam session between Treasure Tracker and Regno della City / Capovolta Piramide gives life to two of the most beautiful paintings of the entire production, with larger than normal areas, developed in all their three-dimensionality and even more dense. A well done condiment, of course, but a bit stingy in the portions, given the material that was available. The challenges of the Toad Pixelloso, this time independent of the amiibo, another excuse to replay completed levels and be able to brag 100% with friends at the bar, for what is a fun and static variant of hide and seek, with the Toad sticker placed in the most unthinkable scenarios. Last but not least, the possibility of breaking the Joy-Con and sharing them could not be missing, going to fish out the local multiplayer in Super Mario Galaxy style, where one controls and movements and the other becomes an almost divine entity, capable of moving visual and throwing punitive turnips.

There is really a lot to play, but above all replay. There was talk of a fanciful game for those who have been chewing video games for a lifetime, this is because a single level before being archived really must be lived on multiple levels and modus operandi. There is the main goal, reaching the star, and there are the three most blatant accessory elements, diamonds. Collecting the star and then completing the page of the book, the secret action to complete will then be revealed (which you may have already performed "blindly"). Once your ability has been formalized with a nice stamp at the corner of the page, another task appears out of nowhere, the "time challenge", classic declination of the time trial, and finally the aforementioned research by Toad Pixelloso. So you understand that the concept of difficulty goes beyond its standard conception, where "easy" and "difficult" are words that in Kyoto sound respectively like "superficial" and "complete". If at the time you missed it on Wii U, now is the time to light a candle, donate € 39,99, and make amends, for everyone else portability is absolutely an added value, indeed, a real definitive form. for the work, also going to whet the wallet of those who have already lived this hilarious love story. After this porting, Toad and his wife absolutely deserve a second adventure, an event that already makes the mouth water for those who have tasted the potential of its gameplay. Nintendo is warned!

From the quality of the architecture in perpetual motion to its rubbery, soft and very nice inhabitants, Treasure Tracker is a delight for the eyes, a chromotherapy session capable of instilling relaxation and good humor. Just look at the expressions of Toad and the love placed in them by the developers to fall in love at first sight. A technical sector that shows only the side in sporadic more bare and forgettable levels, a rarity. What a charm!

Right from the march of the main theme your eardrums will seem like recorders since it will be impossible for you to forget certain melodies, finding yourself humming them even in the least opportune moments. Sound joy that makes you want to perform in embarrassing ballets, now on pressing tracks, now suggestive, mysterious, festive, always perfectly spread on the atmosphere of the individual levels. We are not at the production levels of Odyssey, of course, but it is always a good listen. The Fungopoli orchestra strikes again.

Dioramas full of secrets, details, life, to be observed by turning them over in your hands at 360 °, enhancing the third dimension by means of satisfying curiosity. A puzzle platform gameplay where the protagonist's athletic limitations become the perfect stimulus to create a new sub-genre, more cerebral, relaxing, but just as fun, incredibly ingenious and fresh. Very simple game design rules applied to a variety of surprising situations, even going overboard with the forgettable levels aboard the mine cart. Its greatest merit is to always keep the player's curiosity high until the last of the bonus levels, driven to the voracity to find out what they came up with after that level, again and again. The law of the cherry.

Did you like the article? Share it!
Audio Video Captain Toad: Treasure Tracker
How to increase the FPS in Call of Duty: Warzone ❯