Clubhouse Games: 51 Worldwide Classics takes us to the arcade

When the Switch was unveiled to the general public in January 2017, the many features that accompanied the new hybrid from Nintendo were presented. It was the Japanese house itself that defined it as a sort of maximum summa of all the technological innovations introduced by the Kyoto house in the last thirty years and, immediately, a series of products were shown that are able to exploit many of the new features present, such as Arms and 1-2 Switch. Over time, Switch has adapted to the habits of gamers, making sure that everyone chooses their gaming habits as they prefer. There are many testimonies of those who use the Japanese hybrid exclusively in portable mode, as many those who prefer to keep it constantly connected to the TV. At the gates of summer, Nintendo presents us Clubhouse Games: 51 Worldwide Classics. It is a collection of games of various kinds, the spiritual heir of the 42 timeless classics that had enjoyed some success on the Nintendo DS. We had already talked about it positively in our preview, but now we can say it without any fear of being proven wrong: this new exclusive title represents the quintessence of Nintendo Switch in a crystalline way. Here is our review!

The first impact with this title is somewhat unexpected, in the way in which the minuteness of details strikes and intrigues. Immediately after creating a shy avatar, a terrestrial globe guides us to the first meeting with the panel of proposed activities. Nothing prevents us from sifting through all the titles in the collection right away, but we are rather intrigued by an NPC who wants us to introduce strategy games at all costs. Once the NPC has been invited to choose the first game, the list of present minigames is filtered, showing us only this category. We are immediately attracted to the first proposal, a game called Mancala, and we start it without too much fear. When we would expect to find the game selection screen with simple rules on the screen, here is instead an animated sequence (entirely dubbed in Italian) in which two players begin to simulate some pieces of the game. The video is far from being explanatory, but it instills extreme curiosity by pointing out the most tantalizing aspects of this wacky strategy game. Once finished, we haven't fully grasped the rules, but we really want to start a game after reading the rules carefully. They are few and simple, and it will take less than two minutes to grasp the main concepts. The CPU level is not selectable immediately (there are four of them) and as you win you can access the next levels.

Thus we start a game at a normal level and we are catapulted into the game arena, which is striking for the attention to detail on the screen.

From the wood represented to reproduce the "granary" of the game, to the seeds distributed in the various slots, everything is reproduced with extreme care and increases the feeling of being face to face with a real player. We will not stay here to spend words on explaining the rules of the game (more difficult to say than to play), but it will be enough for us to know that at the end of the games, whoever has collected the most seeds in their barn will win. Two "computer hands" move on the game board distributing these seeds according to pre-established criteria, returning a rather natural feeling, also assisted by an excellent return given by the HD rumble when the seeds fall on the wood. The first game runs smoothly and we immediately want to ring another one, this time being able to select the next difficulty. First, however, a text screen presents us with a welcome surprise: a few lines introduces us to the first curiosity about the game, explaining the origins in a very concise way. We therefore learn of the fact that by playing several times in each minigame, a series of curiosities will be unlocked that will compose a sort of trivia board. The second game also goes smoothly, with some more difficulties. The third level is decidedly difficult and we do not get to the bottom of it; it is therefore time to go and savor the offer in its entirety.

Wii Sport? No thanks!

Clubhouse Games: 51 Worldwide Classics offers a wide range of minigames of various kinds and a good portion of the offer is represented by sportsmen. We immediately underline that this is not a poor reproduction of the Wii Sport catalog, but an intelligent and extremely funny reinterpretation, which makes immediacy its strong point. Some complex sports such as baseball and tennis are simplified in a "game room" key and made extremely functional. The characters will not be able to be moved around the playing field, but will be forced to move according to well-defined paths, creating quick games and controls that are very easy to master.

In most cases, with two keys, you have everything you need to learn the fundamentals.

Despite the use of extremely synthetic controls, the minigames have a good play depth based mainly on timing: learning the controls will be immediate, mastering them perfectly to beat the CPU in "impossible" mode in a tennis match will be a different matter. . We had approached the sports offer of the collection rather skeptically, but we came out of it amused and pleasantly surprised, except for two or three mini-games (such as billiards and golf) which are presented as a mobile declination in a Nintendo Switch key rather poor in ideas.

With joycon or without joycon?

The main feature of this collection is undoubtedly the flexibility with which it can be enjoyed. Whether you are a fan of small joycons, TV mode with the Pro controller or touch controls, the fit is almost perfect. Let's take the world-famous table hockey for example. Each of us has experienced in the arcade the thrill of being able to throw discs at full speed with the movements of the arm. This experience is beautifully reproduced in this collection: you can start playing on the couch with the Pro Controller in online multiplayer or against the CPU, then detach the joycons and move on to a two-player challenge locally by using one joycon each, always remaining in fixed mode. , and finally take the Switch out of the dock and use it as a hockey table on which to use your index finger to control the puck and simulate a real arcade atmosphere. Obviously not all types of games are suitable for all types of commands, given the static nature of some of them, but the effort made by Nintendo is commendable and exploits the potential of its three hundred and sixty degree hybrid.

We reviewed the game thanks to a code given to us by Nintendo. From the review, all the minigames that require the mosaic mode have been excluded, i.e. the use of multiple Nintendo Switches at the same time. 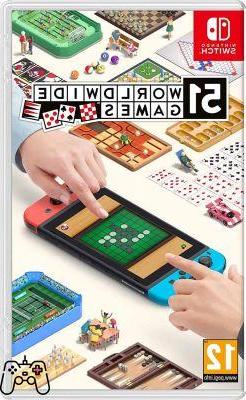 Alone or in company?

Needless to go around it too much: the experience packaged by Nintendo stands out particularly if played with friends, possibly locally.

In this situation, Clubhouse Games exploits its full potential, using practically all the features of the Switch. Online multiplayer is a very valid alternative, both if you want to play with friends from a distance, and if you want to challenge strangers all over the world: choosing up to a maximum of three preferences from the list of games available in multiplayer (almost all, actually) matchmaking will match our data with the preferences of another player online in order to play one of the selected games. Although the dispassionate advice is to consider the purchase especially if you have a large group of friends interested in the type of games offered, we do not feel we should advise against the purchase to those wishing to use them in single player. Thanks to the excellent AI programmed by Nintendo, the challenges with the CPU are anything but trivial and - don't want our dear friends who we are going to challenge - definitely difficult on a strategic level. The largely fruitful effort to make this experience sensible to those allergic to multiplayer is therefore appreciable.

As you may have noticed, we didn't just review this wonderful collection by simply evaluating the minigames one by one. Whether you are a lover of strategy games, card games or arcade sports, Nintendo's offer is rich and detailed enough for you to find your corner of paradise. These 51 classics surprise by the way they are packaged and, in all likelihood, project another commercial success on the hybrid platform, perhaps a bit surprising. Considering the particularity of the period in question and the type of offer proposed, we would be amazed if many Nintendo Switches did not welcome this virtual gambling den that could easily turn several of your evenings. Now it's time to get back to playing Italian-style poker… with craps (yes, it was our favorite!).

As complicated as it is to talk about the graphic aspect in a title of this type, one cannot fail to underline the goodness of the work carried out by Nintendo in taking care of each gaming arena. Whether it's the foosball field or the Black Jack table, every detail is reproduced down to the smallest detail and dramatically increases the identity of a "game room". Except for some uninspired minigames, the technical / artistic quality of the title is well above average.

To surprise, above all, is the excellent localization in Italian which precedes the animated introduction of each minigame and which increases global immersion. Excellent sound for small gestures during card and strategy games, as well as in sports minigames. On the other hand, the soundtrack, composed of a series of uninspired tunes, is unforgettable.

Clubhouse Games: 51 Worldwide Classics contains all the peculiarities of the Nintendo Switch and exploits its full potential to 100%. Whether you want to play it on your laptop (with the joycons detached or attached), using its tactile controls or in fixed mode with the Pro controller, this collection of minigames will adapt to every need. Clearly for some minigames there are preferable game modes, but the playability is always excellent regardless of the type of commands chosen. This timeless collection, however, not only excels from the point of view of playability, but offers a panel of fun activities, various and of different depths, giving you the opportunity to challenge friends (both locally and in multiplayer) or even simply to try your hand with a very difficult CPU.

Did you like the article? Share it!
Audio Video Clubhouse Games: 51 Worldwide Classics takes us to the arcade
When is the start time for the Fortnite Rocket League event? ❯

add a comment of Clubhouse Games: 51 Worldwide Classics takes us to the arcade