The Italian school of Disney cartoonists has created a real genre through the parodies of the classics of cinema and literature declined through Mickey and Donald. This work was based on telling already known stories and emblematic characters, sweetening the atmospheres and settings to make everything accessible even to the little ones, but maintaining a certain wit and irony in reinterpreting something apparently far from the tones of a Disney comic. even to the older ones. The developers of Footprints have moved in a similar way, with a point & click adventure that seems to have come out of the pencils of authors such as Giorgio Cavazzano and colleagues.

Our protagonist clearly refers to Humphrey Bogart, who became an icon of cinema noir thanks to his interpretation of the hard and shady investigator, but with significant differences that easily arouse a smile in the players. In fact, Gallus pronounces a series of maxims of life with the same emphasis as the shrewd man, but ends up producing a handbook of absurd rules enunciated with the utmost seriousness, while his assistant is a cactus with which he consults unilaterally. Furthermore, his zest is nicely out of place, given that the situations he faces are far from grim and violent. His task is to find out who has carried out a "brutal" massacre of living room plants, made wither in suspicious circumstances. The narrative of Detective Gallo therefore appears immediately superimposable to that of the aforementioned Disney parodies, relying on a humor made up of contrasts between a serious form and a comic substance.

The purely playful aspect, on the other hand, is the same as in point and click adventures such as Monkey Island and Day of The Tentacle (or the most recent Thimbleweed Park) where you access a menu from which to select different objects and combine them with each other or with the backdrop to solve enigmas and environmental interactions. In this respect, the developers have been able to propose rather sensible combinations, avoiding the sometimes abstruse logic on which some illustrious competitors were stuck, without creating situations so complicated as to send even the most willing user towards puzzles haywire. The scrolling and progression of Detective Gallo is therefore quite easy and open to users less accustomed to chewing this genre, focusing a lot on the fun linked to the situations and its pronounced humor.

Graphically, the work done is truly commendable. Characters and backdrops are created with really high quality hand made designs, without sharp pixels, achieving an overall result that places it among the best examples for this type of game. In particular, the chromatic palette, rich in bright colors, which accentuates the comic effect, is appreciable, as well as the style with which the protagonists are drawn, to the point of seeming taken from an official Disney production dedicated to Donald or Scrooge. However, in order to maintain such a high average level, it was necessary to limit the number of rooms that can be visited and of the figures with whom to interact. The supporting actors are reduced to a handful, just as the places where the action takes place end up being very few, causing a continuous bounce between a few points to switch from one puzzle and one dialogue to another. The longevity consequently appears rather reduced compared to the average of point & click, settling around four or five hours. furthermore, in terms of market and financing, figures such as to be able to launch a project of such large dimensions in relation to the qualitative ambitions it sets itself.

It is in fact good to specify that the work behind such a high quality cosmetics is a lot, indirectly causing an increase in costs that affect how much material can be created and inserted in the final product. The problem therefore is not one of skills, because the authors present themselves on the market with a well-characterized product, which denotes a knowledge of the reference genre and with considerable technical work behind them. If Detective Gallo had had a great publishing house behind it or an international Kickstarter campaign comparable to those of Broken Age or Thimbleweed Park, it is easy to think that the final result would have been perhaps even superior to that of the titles produced by the overseas sacred monsters.

The price-quality ratio is however more than adequate, given that the game is offered at the figure of 15 euros, significantly lower than the current average of the indie scene. The adventure of the Italian cockerel is therefore interesting both for an audience of fans of graphic adventures, and for those who want to approach the genre with a sparkling and well-packaged title.

Detective Gallo is currently only available digitally on Steam and GoG.com. During the summer, publication is also expected for Nintendo Switch and Playstation 4. 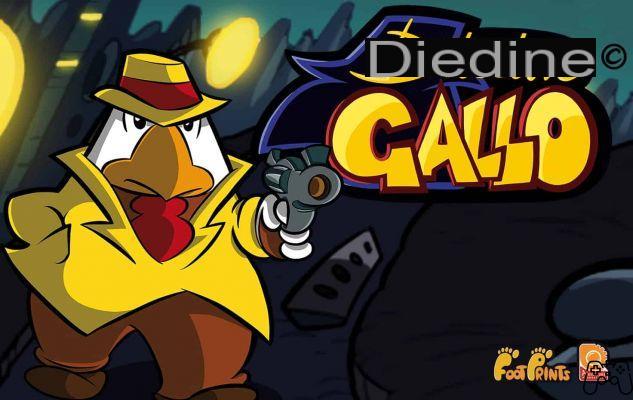 Aesthetically, Detective Gallo is one of the best graphic adventures on the market. Created with a cartoon style that seems to be transposed in weight from the pages of a Disney comic and with a truly commendable quality of hand-made drawings.

The music creates a very fitting background, which does not disturb the enjoyment of the dialogues and does not distract from struggling with the resolution of the current puzzle. The sound accompaniment is also very reminiscent of that jazz typical of noir or detective films to which the plot wants to refer.

The gameplay is simple and essential, based on a point & click formula suitable for players of all ages. The puzzles are composed in a sensible way, without abstruse combinations and without insurmountable points without consulting a guide. As a result, the adventure is very smooth and the puzzles are fun for how they lend themselves to humorous curtains.