Flotsam - Wrecks of an unsustainable civilization

Flotsam is the answer to the anxieties of the society of 2019 who hears about melting glaciers and rising sea levels, extinction of species and large-scale climate change that will lead to a world completely submerged by oceans. This post-apocalyptic scenario that so many still refuse to believe is the basis used by Pajama Llama Games for their cheerful aquatic city-builder Flotsam, in which our floating city will have to survive thanks to the scraps (and waste) of preapocalyptic society by collecting garbage. and inventing bizarre tricks.

Before analyzing all aspects of Flotsam it must be said that we are talking about a early access, available for just over a month on Steam and still quite immature. On the Pajama Llama website there is a roadmap that shows the medium-long term goals, unfortunately without giving deadlines. Among the first additions there will be a series of improvements dictated by the user such as additional animations, improvement of tasks and the possibility of a greater zoom with the camera, then it will be the turn of the day / night cycle followed by the introduction of dynamic weather and finally a system of objectives that the player will have to fulfill. These additions are likely to be available for the exit from the early access state, announced for late 2020.

The hub of our town (mine is Thunberglandia, in honor of Greta and her environmentalist effort) is the City Center, a structure similar to a lighthouse from which the walkways made of pegs, doors and other makeshift materials to connect the various buildings unravel.

Through the construction menu we can access the five types of buildings: in the first there are those used to connect and expand the city, create storage warehouses and beds for the inhabitants; through the second category we can create dryers to dry wood and fish, barbecues and ships for the production of sushi; in the third, the water purification buildings; in the fourth there are the piers where exploration and fishing vessels can be docked; through the fifth category we build the sails necessary for the aquatic city to move from one point of the world to another.

In order to survive, the settlers need water and canned food (in addition to rest), while the recovery of waste materials such as wood, plastics and scrap metal is required for the creation of new buildings. All the resources are present in large quantities in the ocean and to recover them it is enough to send the inhabitants to swim or to build ships, a much faster option, while the special boat is required for fishing. Once brought back to the city center, some of these resources must be further treated in order to be used, such as the wood that must be dried.

After having exhausted most of the resources of a landing area, we can move to another point in the sea, as long as we have built the sails or have enough fuel. Each island we visit contains traces of flooded cities where to carry out missions, which consist in saving the inhabitants who go to replenish our colony, recover materials or goods for survival. To complete these missions, transport ships are required to reach distant islets and collect materials more efficiently.

By completing tasks and progressing in the game we earn research points to spend in the technology research menu, which allow you to unlock new buildings for each category. Larger warehouses and welcoming homes, laboratories for the accumulation of industrial waste or buildings for the purification of sea water or the accumulation of rainwater, barbecues and boats for home sushi serve to increase the productivity and therefore the sustainability of the aquatic city , which, hosting more and more inhabitants, needs a greater yield and production of materials and consumer goods.

I played Flotsam recovering from the debris a Sapphire RX580 8Gb Nitro +, a Ryzen 1600 and eight gigabytes of RAM. From the wreck of a ship I recovered a Logitech 402 mouse, a Cooler Master XTi mechanical keyboard and a 24hz AOC C1G144 monitor. 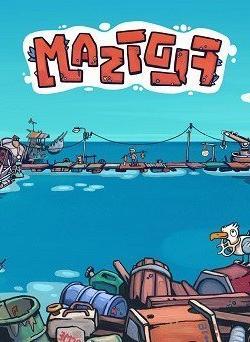 Flotsam is available on Steam at a cost of € 22.99, a currently high price for an early access game that has all the potential to improve and become an excellent city builder, but which at present does not offer more than half a dozen hours. of game. Yet the basis is promising and the path traced with the roadmap by the developers seems the right one, but Flotsam is currently not recommended for anyone who wants a game over, but only to those who want to support developers and trust a well-started project.

If you are looking for a particularly light-hearted post-apocalyptic world, rendered with colorful graphics that return a vivid maritime spectacle populated by whales, corals and the ruins of an outdated civilization, trust the Pajama Llama and be patient!

Colorful and vivid, the Flotsam color palette paints an ocean full of creatures and debris in a joyful and pleasing way, the sometimes crude city models sin a little.

Without a narrator, it all boils down to the lightest accompanying music and the noises of sea creatures and seagulls.

Flotsam is an atypical city builder with a view to the future of the Earth, but still offers too little to recommend. In short, he is not a goodbye but a goodbye ...

Did you like the article? Share it!
Audio Video Flotsam - Wrecks of an unsustainable civilization
How to evolve Machoke into Machamp in Pokémon Brilliant Diamond and Brilliant Pearl ❯

add a comment of Flotsam - Wrecks of an unsustainable civilization