When I first came face to face with the Resident Evil 7 Biohazard review, I admit I had some prejudices, not so much because of the goodness of the project itself, but because like so many fans I couldn't digest the idea that Capcom literally upset what was (and is) one of my favorite sagas of all time. Okay, try new ways, I said to myself, but here it seemed to me that we had exaggerated. Of course, for any developer committed to the horror genre, it becomes increasingly difficult to amaze and scare the audience, now little predisposed to surprises for years and years of "exposure" to films, TV series and genre video games.

In front of an audience accustomed to all kinds of terrifying situations, Capcom has found many difficulties over the years in keeping a historic brand like Resident Evil alive and current.
But getting to design almost a sort of reboot of the series, in search of that solution that would help him find atmospheres and mechanics, albeit partially renewed, of the first chapters without the old protagonists, the zombies and other iconic creatures seemed to me like a ( annoying) gamble. Instead…
Instead, after a few hours of play, despite its being different, Resident Evil 7 biohazard, which we review here in its Gold Edition version, ended up conquering me. And like me, many players.

The most evident and in some ways epochal novelty of the work is certainly the passage to the first person view, which in fact makes this perfect new chapter to play with PlayStation VR, Sony's virtual reality headset is well supported here. Then certainly the protagonist and the scenario different from the usual, elements in antithesis with the expectations of longtime fans and with the themes of the series.
But beware: this does not at all mean that the game is bad or too distant, conceptually, from the initial chapters of the saga. It's just a little bit different. After all, the first Resident Evil was developed starting from the idea that the player would be scared through twists, an atmosphere tense to the point of returning a feeling of imminent danger, of threats hidden behind the dark corner of a corridor or behind the protagonist.

All accentuated by a gameplay centered on the concept of survival, and therefore on the few means available to the player to defend himself from enemies. Even the character to be interpreted, who is not the usual super-trained agent or paramilitary, but a simple man catapulted in spite of himself into a twisted world full of pitfalls, which also for this reason paradoxically becomes more credible and scary, contributes to making the idea of ​​survival.

The whole adventure is set in Louisiana, between large swampy areas and dense forests of palm trees and cypresses populated by terrifying creatures, for a story that sees the protagonist Ethan, an ordinary man who sets out in search of his missing wife after receiving a strange video message from him, and finds himself living a real nightmare with open eyes, forced to fight against monstrosities and madness to try to survive. Because everything that staggers, crawls and moves on that portion of land, behind the walls of houses, garrisons or trees, no longer has anything natural.

From the very first bars of the game, the atmosphere is decidedly distressing and full of tension, and the primary objective is immediately clear: we need to find a way out of that nightmare as well as Ethan's consort. She has little action, but above all no zombies or other "beings" from previous chapters. Enigmas, exploration, resources to be managed in the best possible way, on the other hand, are present as key elements of playability, without forgetting to approach the various game situations in a different way depending on the case.
For example, hiding or running away are two options that should never be underestimated, especially considering the fact that in the game there are enemies that cannot be eliminated easily or with conventional methods, and that sometimes you find yourself fighting in tight spaces. The former, especially the members of the Baker family, owners of the house in which you find yourself moving initially, are rather difficult and require a greater study of the setting, while the more approachable ones such as Mycotics or giant wasps should not be underestimated anyway.

Pad in hand, the controls are not particularly difficult: I found them quite comfortable as a mapping, at least on the PlayStation 4 where I played the title. On the Sony console you can partially defend yourself from enemy attacks by pressing L1, while with R1 you can heal quickly. If you have a firearm and enough bullets, with L2 you aim and with R2 you shoot, or use sidearms such as a knife. In these cases it is preferable to hit the possibly destructible body parts of the opponents, to limit their attacks or hinder their movements: these are fundamental gameplay choices that can decide on Ethan's life or death in an instant.
If not, better escape and search for a hiding place to crouch pressing R3. To interact with the environment and perhaps analyze some useful clues to solve an environmental puzzle, the A key is used instead, and so on.

This command scheme obviously also applies to the DLCs present in this edition, of which they become an added value. Resident Evil 7 biohazard Gold Edition, in fact, includes all the contents related to the Season Pass, including Confidential Movies 1 and 2 and the new episode Zoe's End, which better delves into the events of poor Zoe Baker. In addition there is the free package No Hero, which sees the protagonist Chris Redfield.
To vary, if anything, are the mechanics, but only in this last DLC, as Chris's military skills lead to a more shooter approach.

A little above I spoke of a gloomy and fearful atmosphere. In this sense, to adequately support the entire system there is a technical sector that rests its solid foundations on detailed graphics and on a sound sector of excellent workmanship. In the first case the title sometimes touches photorealism, especially on PlayStation 4 Pro: particle and light effects are among the best visible in any triple A production, with a series of light / dark games that make scenarios in which the user is most often forced to move even more terrifying. Personally, I got so many frights during my games, and more than once I found myself dying and having to start a sequence again more for being influenced by the atmosphere than for the real difficulty of killing an enemy or avoiding it.

Both indoor and outdoor areas are quite evocative and disturbing, and step by step you feel the constant threat of something hidden in the dark or around a corner.

As for the characters, we have good polygonal modeling and an appreciable effort in facial acting, while the animations appear swinging in relation to the character: those of the protagonists and main antagonists are excellent, those of some monsters, discrete. Excellent frame rate, which is particularly stable at sixty frames per second, and audio. The game is entirely spoken in Italian with good general acting, and a soundtrack whose songs increase the involvement thanks to a series of symphonic tracks that are activated in the most dramatic and "horrific" situations.

I played Resident Evil 7 Biohazard Gold Edition on PlayStation 4 and with a stash of anxiolytics alongside after reviewing the original on Xbox One. 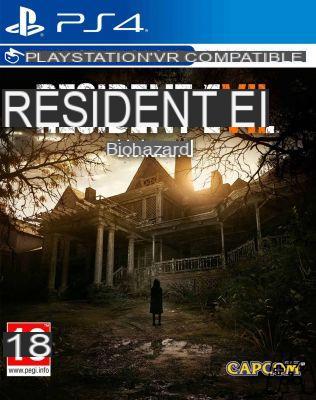 Resident Evil 7 Biohazard Gold Edition is a scary game, ideally built on the classic scaffolding of the first Resident Evil, but reinterpreted to adapt to the times. In fact, the product mixes old and new elements to create a more modern experience, but no less frightening or ideally too different from its first predecessors, thanks to an unhealthy and terrifying atmosphere masterfully reconstructed by Capcom. The only flaw in our opinion is the absence of some classic enemies of the saga and the clean break with the past in terms of history.

Review by Massimo Reina Did you like the article? Share it!
Audio Video Resident Evil 7 Biohazard Gold Edition
Can you catch a bright Virizion in Pokémon Go? - November 5, 2021 ❯