Those Who Remain: Dormont's Secrets

A thousand blue flashes scan me in the dark, hungry, glacial, waiting for a false step, a wrong move. I am alone, and nothing is as it seems. Among dark creatures, betrayals and unpronounceable sins, I entered the diabolical Dormont in search of forgiveness and redemption.

The following is the insane tale of a journey with no salvation: our review of Those who remain.

Those Who Sin Those Who Remain

It only takes a few minutes in the disturbing world of Those Who Remain to be trapped, bewitched in its mephitic coils. The unmistakable and magnetic references to Twin Peaks of the first few minutes catalyze the attention and it could not be otherwise, but there is more. The narrative plot is in fact more than enough to keep the player's interest alive in an autonomous way. The web of secrets that lurks in the streets of the cursed Dormont has a charm that is hard to resist.

The story of Those Who Remain begins with a tragic accident that prematurely ends the life of little Annika. The sad event, however, is only the beginning and triggers a sequence of chain reactions that forever upsets the lives of all the inhabitants of the town. As you shed light on the mysteries that revolve around the story and on the otherworldly forces that have been awakened, you will also be forced to confront your harrowing past, in a pressing succession of choices and consequences.

In the world staged by Camel 101, no one is sinless. All the characters involved, starting with the protagonist Edward, a cheating adulterer in full identity crisis, pursue their intentions without paying attention to others, often coming to terms with their own morality and staining themselves with more or less serious sins. Yet the boundary between right and wrong is always blurred and blurred. It will be up to you to draw a line between good and evil, thus shaping a story in accordance with the nuances of your ethics.

Those Who Judge Those Who Remain

Precisely in the possibility of judging the actions of others lies one of the most intriguing characteristics of this first-person horror adventure. In fact, during your journey you will be called to act as a judge and jury at the Dormont sinners trial, being able to decide whether to absolve the tormented souls or, on the contrary, condemn them for eternity. Each decision has a price and determines the epilogue you will witness, among the three available.

All the other mechanics are quite derivative, although characterized enough not to be anonymous or uninteresting. The gameplay essentially revolves around two pillars. On the one hand there is the impossibility for the protagonist to walk in the dark, as it is populated by demonic silhouettes, and the consequent search for light sources to continue among the shadows. On the other hand, there are environmental enigmas and puzzles whose resolution requires moving with portals between the earthly dimension and an alternative reality, similar to the Upside down by Stranger Things. The quality of the latter is unfortunately fluctuating, between noteworthy ideas and more banal and forgettable sequences.

Those Who Dare Those Who Remain

The playful and horrific system of Those Who Remain fits into the groove of the various Amnesia. Edward has no way of defending himself from the demonic wickedness that haunt him, now in the alternate dimension, now in real life, and the only solution is to hide or run away. It follows an inevitable and constant state of alert in the player, but this is not the only game design choice that helps to keep the tension high.

The final sequences are a great tribute to Hereditary, Ari Aster's debut masterpiece

Referring to a certain way of understanding horror cinema, which we could define as an author, Camel 101 has opted for removal of annoying jumps in favor of alternative solutions. Fear is built by playing on expectations, disturbing atmospheres, macabre mysteries to be revealed, rather than with sudden and unjustified scares. The most direct reference goes to Ari Aster's Hereditary, the 10s prodigy director, honored with a long final sequence in the game. Those Who Remain tries to replicate the “slow burn” mechanisms of the film, mounting the anxiety-inducing charge little by little, until it explodes in the closing bars. The result does not aim so much to scare immediately, still managing in many situations, but rather to make a seed of unease sprout in your soul, once the screen is turned off.

We played Those Who Remain on PC thanks to a Steam code provided by the developers. The test configuration is equipped with RX 590 8GB, Ryzen 5 2600 and 16GB RAM. 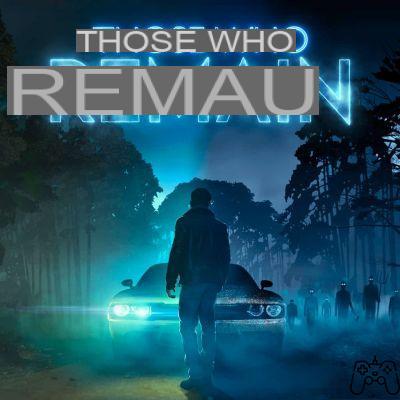 Those Who Remain is an extremely imperfect product, with evident limitations in every component, but not without charm, on the contrary.
Yes, the graphics sector is modest, the artificial intelligence does not shine, the physics is barely sketched and the scope of the title is limited, for obvious reasons, by its independent nature. Don't worry though, because even if taken together, these factors do not compromise the final result. The game exudes the love of its authors towards the genre and offers many interesting ideas, both in narrative and playful terms, which will delight both horror fans and those players who will be able to turn a blind eye to some venial sin. Advised.

If you are interested in learning more about some background related to the development of Those Who Remain or the sources of inspiration for Camel 101, we refer you to our interview at Ricardo Cesteiro, founder of the team.

The technical sector, where not beautiful, is at least intelligent. Some shrewd decisions effectively mask the less successful aspects, giving the screens a title that is all in all pleasing to the eye. Good references to sources of inspiration, even on a visual level.

No sudden noise fired in the ears to make you jump in your chair. The sound accompaniment does her duty, feeding tension when needed.

Interesting is the system of convictions that opens the door to one of the three available endings. The two planes of reality, the play between lights and shadows, the puzzles and the impossibility of defending oneself from enemies give life to a fun and functional product of its kind.

Did you like the article? Share it!
Audio Video Those Who Remain: Dormont's Secrets
How to evolve Riolu in Lucario in Pokémon Brilliant Diamond and Brilliant Pearl ❯

add a comment of Those Who Remain: Dormont's Secrets