Of the first two No More Heroes, one of the most appreciated aspects was the protagonist: Travis Touchdown. A surname that recalls the best action in the hard sport of American football, perfectly fitting to define a character involved in situations where everything is over the top. Violence, dialogues, humor, all declined with the irreverent stylistic code of Suda51, but with some further touches to characterize it.
In fact, Travis is also a character founded on the contrast between being a lethal hitman and a sometimes naive video game enthusiast. That kind of Gascon hero, but also slightly clumsy, a bit Bruce Willis or Nathan Drake, who is likeable for that very reason.

Having become a small icon of alternative productions, therefore, a derivative dedicated to him could not be missing, already released during the year for Switch and now re-proposed in the complete version of all the dlc for PlayStation 4 and PC. This at least to fill the wait for No More Heroes 3.
Travis Strikes Again is in fact a middle chapter, a glue among the main ones, created with the intention of emulating an indie production and "playing with games", making both the ideas of the story, and the gameplay itself, a combination of quotes and find it extravagant and creative.
Games Suda therefore becomes like those magicians who pull out the unthinkable from the hat, ready to amaze the player in every level with something new. However, to justify all these flights of fancy, an equally imaginative motivation was needed, but consistent with the "criminal fantasy" now typical of this developer. In fact, Travis owns a rare prototype of a virtual reality console capable of transporting users inside the video game, but it is a pity that he finds himself activating it in spite of himself during the struggle with Badman, who broke into his trailer to consume his vendetta. The two are therefore forced to work together to come out of a series of levels that present themselves as real games in their own right and that often not only differ in setting, but also in mechanics.

However, the general setting remains that of the hack & slash with an inclined view, devoid of role-playing components, but full of action and with decidedly well-structured boss battles. Travis and Badman can retrieve multiple cartridges containing new abilities to equip and use in combat, but the base always remains two types of attack (typically divided into strong-slow and weak-fast) and a dodge. The pace of the game is therefore very dynamic and devoted to pure arcade, very suitable for those looking for a title with which to have fun and to alternate with other more decompressed and dispersive ones such as open worlds. It is possible to play in a local cooperative in two, finding in this way a greater involvement in the purely playful part. However, even if faced alone it is difficult to get bored because of the huge amount of extravagant ideas that always keep the attention high for all the 10 hours necessary for completion, denoting a good overall longevity.

In fact, the numerous ideas with which the perspective and the playability itself are modified are surprising, proposing levels with a top view in which to get out of a maze, or two-dimensional platform sections, or still others slightly exploratory.

That Travis Strikes Again “plays with games” can be seen from his continuous quotation of game design, as well as images. Because if on the one hand we move on to emulate completely different play types, on the other we also pay homage to them in the atmosphere and in the representation, even trespassing on the explicit.
For the occasion, in fact, several collaborations have been stipulated with indie studios, inserting the logos of really existing games in the form of t-shirts that Travis or Badman can wear as if they were admirers of the titles in question. In fact, collectibles allow you to obtain decorative garments dedicated to Dead Cells, Blazing Chrome, Hollow Knight, Furi, Steamworld Dig and many more. But these are just some of the many easter eggs present, as every dialogue and moment creates a sort of estrangement or laughter with which to amaze the player (such as the breakages of the fourth wall, here implemented with a lot of irony). There are also numerous references to the previous Suda51 games, from the most famous, such as Killer Seven to the more niche ones such as Silver Case.

Graphically speaking, the title uses the Unreal Engine in a very colorful, albeit not very detailed way, with a sort of cel shading with tints that tend to computer digital acid, rather than the tenuous cartoonish. However, there is talk of a production that is placed in the medium-economic range, therefore the quality is congruent with its value and finds an enhancement in the visionary and always varied touch with which the settings are built (with suggestive shots in their being anomalous, such as the passage under the arch made of mechanical bulldozers). The soundtrack mixes 16-bit style synthesizer music, with electronic tracks from other Suda games, creating a kind of quotation also in the audio sector.

Travis Strikes Again is a fast and dynamic arcade title, immediate and perfect to play as an interlude from more challenging titles. The huge amount of quotes, ideas and variations implemented both in the dialogues and in the game design, keeps the involvement high whether you play it alone or in a cooperative. 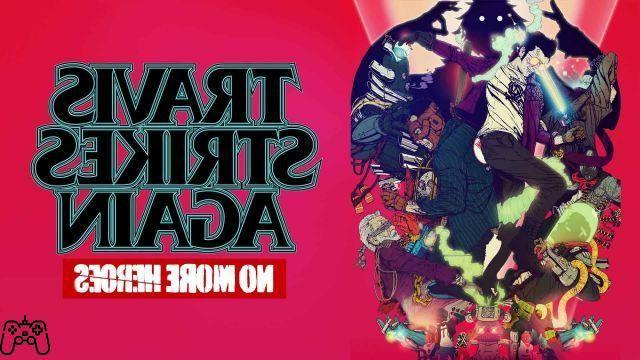 Graphics in line with mid-range productions, but with a visionary touch in the creation of the atmospheres and a very effective acid color coloring to the surreal tones of the game.

Electronic music halfway between 16-bit synthesizer and remixing of tracks from other Grassoppher Entertainment games, for a rhythmic and citational soundtrack at the same time.

Few commands, for a simple and immediate playability, not particularly deep, but smooth, enjoyable and with a challenging difficulty curve at the right point. The numerous variations of game design proposed in the levels considerably increase the overall variety.

Did you like the article? Share it!
Audio Video Travis Strikes Again : No More Heroes – Complete Edition
How to evolve Sinistea into Polteageist in Pokemon Sword and Shield ❯