It's been a good 10 years since the Uncharted series appeared on Sony platforms: four main chapters were baked and millions of fans were hooked (the rhyme is purely accidental).

Those familiar with Nathan Drake's gang will know exactly what to expect from this Uncharted 4: A Thief's End DLC. All the others who, despite owning a Playstation 3 and / or 4, have never accompanied this light-hearted thief in his adventures, certainly will find no reason to start now.

In fact The Lost Legacy crystallizes all the main features of the saga: breathtaking settings, high quality Hollywood script in which the psychological characterization of the characters takes a leading role (as it almost never happens in video games), action sequences from third person shooter that skilfully alternate with long phases of exploration on foot or by jeep. Everything is performed in an almost flawless way from a technical point of view, especially the interactive films, in which you are asked to press the appropriate buttons in time, are genuinely spectacular and remain unmatched in the videogame universe.

The main novelty of the game is the protagonist, indeed the protagonist: having happily concluded the narrative parable of the thief Nathan Drake, the spotlight is now on the thief Chloe Frazer, an old and beloved acquaintance of the fans of the saga introduced in a supporting role in Uncharted 2: Lair of Thieves. Without fear of being proven wrong, it can be said that the most successful aspect of this Lost Legacy, and at the same time one of the few original ideas among so many déjà-vu, is the charisma of Chloe, which begins with the same bravado of Nate and then shows a multifaceted and tender personality: playing, it comes natural to cheer for her.

The Naughty Dog artists have done an exceptional job in characterizing facial expressiveness (not surprisingly, the photo mode can give really funny results, as reported by Kotaku), as well as superb is the performance of the actress Claudia Black, who is a veteran of the gaming industry (RPG fans will be curious to know that this is the Morrigan from Dragon Age).

Another aspect in which The Lost Legacy manages to shine with its own light, emancipating itself from the previous chapters, is the relationship between Chloe and Nadine Ross: the latter, despite having an antagonist role in The End of a Thief as leader of the Shoreline, also manages to act as an empathic figure towards the player. The relationship between the two co-workers first (Chloe hires the mercenary Nadine for support in her search for Ganesha's Fang) and friends is well written, well structured and genuinely funny. The co-author of the screenplay, Josh Scherr, made his presentation public at the recent GDC2018 in San Francisco, on this very interesting topic.

Obviously it is not the first time that Naughty Dog has shown a great deal of his ability to develop the relationships between the main characters: Chloe and Nadine give ample proof in this game but the absolute pinnacle obviously remains that of Joel and Ellie in The Last of Us, where it is told with extraordinary tact and qualities such as the hostility and coldness of the beginning, slowly giving way to trust and affection.

From the point of view of gameplay, this Uncharted does not add much news compared to the past: the exploration phases still consist of long climbs interspersed with the familiar explosions that force the player to abrupt deviations of the path. Here the game shows its proverbial stiffness by bending the laws of physics to ensure the player successfully completes almost any stunt. In fact, consistent with the rest of the series, the level of challenge is not high: Uncharted is pure escapism.

The action phases are characterized by a good gunplay for an adventure game but slightly inferior to that of a high-level shooter. To shine in these cases is rather the level design: complex, brilliantly organized almost always on several levels and which allows you to make the clashes very dynamic and fun.

Unlike The End of a Thief, this DLC is set entirely in a single country, India: here, after the initial chapters, the player is equipped with a map where the points of interest are marked. As there is no pressure to undertake the various proposed activities, optional and not, in any particular order, it can be said that this is the first time that Naughty Dog is confronted with a typically open-world formula. However, this is a really underdeveloped hint: it almost seems that the developers wanted to test the ground and then, eventually, deepen the question in future projects.

I played Uncharted: The Lost Legacy with digital copy purchased on the Playstation Store. I completed the adventure in nine hours. The game was completed with a PS4 Pro connected to a Samsung 40MU6120. Excellent audiovisual rendering. The game was in the Italian version: excellent dubbing. 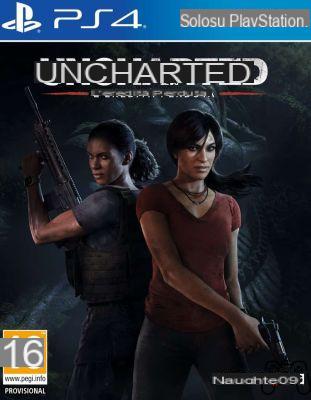 The feeling that pervades The Lost Legacy is that Naughty Dog has limited itself to the minimum effort to package a product that, although of high quality, does not add anything new to the Uncharted saga. The technical mastery, bordering on virtuosity, masks the usual narrative linearity of the series and, above all, the constant déjà-vu, which appear inevitable if we consider that the last chapter that added substantial innovations to the backbone of the game was Uncharted 2: Lair of Thieves.

Positive note is the new protagonist Chloe and her companion of raids Nadine: the evolution of their relationship is the most successful and interesting aspect of the game. On the other hand, the hint of open-world mechanics is really underdeveloped and consists of only a handful of optional activities.

Gorgeous to look at, breathtaking Indian setting and incredible quality of the characters' facial expressions.

Good soundtrack and well integrated with the various phases of the game, but not particularly memorable. Dubbing in excellent Italian.

Control system tested by Uncharted 4, without updates. Well thought out stages of action, puzzles and riddles not particularly difficult.

Did you like the article? Share it!
Audio Video Uncharted: The Lost Legacy
How to evolve Graveler into Golem in Pokémon Brilliant Diamond and Pearl ❯