When in 2014 I first wrote the review of Assassin's Creed: Rogue for Xbox 360, it was definitely another "era". On balance, in that period, it was not so rare to forgive almost lightly some technical problems, even cyclical ones, of certain productions. Apart from the plot, which saw a Templar as the protagonist for the first time, with all the implications of the case also in terms of game situations, this episode of the series also presented a sometimes rigid control system, a level of challenge calibrated downwards and a repetitive structure in the long run. But today? Are we willing to turn a blind eye to certain flaws just to enjoy a title?

Like those who preceded him, Assassin’s Creed: Rogue Remastered is the classic open-world third-person adventure: looking at it it seems almost a total conversion of Assassin's Creed III and Assassin's Creed IV: Black Flag, with the gamer busy following a plot and exploring wild lands, rivers and seas to sail in search of treasures, ships to plunder and other material to collect, to then improve the appearance and power of your ship and your character.

Shay Patrick Cormac is an undisciplined young man who joins the Assassin Brotherhood and then leaves it after a particularly traumatic experience that pushes him to join the historical enemies of the latter. Shay thus finds himself acting on behalf of the Templars in the New World, against the backdrop of the 7 Years War, the colonies, the warlike natives, in a mixture of situations, events and facts as always halfway between the historical and the fantastic, between situations, some phone calls and some unexpected twists.

The adventure then develops as always, mixing different playstyles ranging from stealth to adventurous, between not particularly complex environmental puzzles, acrobatic jumps, naval battles and treasure hunts, daring escapes and collecting money and materials to enhance and beautify yourself and your ship. But as the story is approached from an unusual point of view, there are also inevitable variations in terms of assignments, strategies and arsenal.

In fact, in the unprecedented role of Templar the player has to perform "inverted" tasks, and therefore to protect some characters of the Order from the attacks of the Brotherhood, to eliminate the most important local Assassins or to carry out secondary missions with the constant threat of being hunted and hit by surprise by one of the Creed.
I still like this aspect of the game today, even if I admit that it is difficult, playing, to get used to certain obsolete mechanics and defects that have now been overcome.

Pad in hand, the feeling with the controls is immediate, but the sensation that is perceived in certain moments is that of a fluidity and naturalness in the unfolding of the only discrete action, especially during hand-to-hand fights and during parkour action. with invisible obstacles that sometimes seem to stand between the character and his path and some unwanted movements.

Another thing that I still appreciate about the game is the involvement and the atmosphere it is able to instill thanks to the story and the setting. In the first case I like the character of Shay, strong, tormented and charismatic in her way, even if the question of "betrayal" could have been better explored; in the second I find fascinating the era, the snow-covered and uncontaminated areas on the ground, and the seas to explore. These are, in my opinion, the two main strengths of Assassin's Creed: Rogue Remastered.

The game formula not much changes even in the offshore missions, apart from the small differences here too due to the role of the protagonist. His ship, the Morrigan, is structurally leaner than the Jackdaw of the fourth chapter, since it must also move along the rivers, but it is equipped with a superior paraphernalia, being able to count on a set of advanced devices that allow him to be able to exploit a series slightly more varied attack and defense solutions.

At sea you can be victims of an Assassin boarding, but also interact with icebergs to exploit them to your advantage and change the approach to naval battles.

The remastering work has materialized in an overall good technical sector. Considering the starting point, the result is not bad, even if we are facing a production that is visually distant from others specially developed for the PlayStation 4. In general it shows an improvement in the rendering of the environment, and the new resolution to 1080p gives a more defined image and bright colors. On the one hand, it enhances the play of light and shadow, and the reflections on the ice and water guaranteed by the new light source management system, on the other hand, however, it also highlights the negative textures of the past generation of consoles.
The polygonal models and character animations remain the original ones from 2014, but at least feature slightly more complex textures for clothing and accessories. It goes much better with the soundtrack, edited by the composer Elitsa Alexandrova, able to properly underline each phase of the adventure and the dialogues in Italian, dubbed with the right interpretative tonality depending on the moment or the mood of the characters.

I played Assassin's Creed: Rogue Remastered on PlayStation 4, having previously reviewed it on Xbox 360. 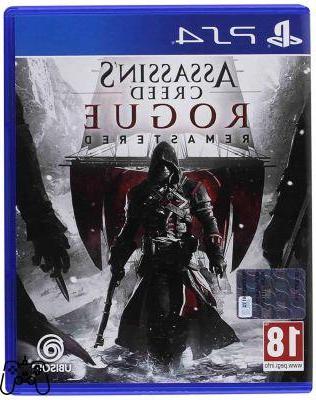 From a production like that of Assassin’s Creed: Rogue Remastered we could not expect sensational news in technical or gameplay terms, considering its origins. So keeping this important detail in mind, if you are minimally interested in the game you have to ask yourself the question I wrote at the beginning: in 2018 are you still willing to turn a blind eye to outdated mechanics? If the answer is yes, the game can still reserve some surprises and turn out to be pleasant to see and play, thanks also to a plot with a cinematic breath that places the gamer in the role of a Templar for the first time in the history of the series. Otherwise it will be difficult to appreciate these characteristics.

The remastering work was good, but despite the efforts of the developers, the old-gen nature of the project is perceived. Part of the balance is evocative scenarios and the renewed light and shadow management system.

Music of excellent workmanship and perfect for the historical-narrative context, beautiful dubbing in Italian.

The control system is the classic one of the series with the merits and defects of the case, level of challenge to improve, stealth mechanics, puzzles and platformers that all in all still hold up.

The Walkthrough of Mass Effect 3