It must be very difficult for Sony to communicate how innovative its new controller is Dualense in a year when trade fairs, industry events and press-tested classics were unfortunately not possible. And it's further unfortunate when a talented studio like Asobi Team has crafted what is arguably the most complete, longest running, and most articulate tech-demo that's ever seen as Astro's Playroom. This is the review of Gameplay Cafè.

Proposed for free, and pre-installed, in every new PlayStation 5, the title of the adorable robot now mascot of the new console, can be easily considered a video game in its own right, and the term tech-demo is actually narrow. This is because faced with the reduced longevity, about two hours to complete it and at least double to get to the Platinum trophy, the quality of the product is undeniable and having it already installed means that it is probably the first game you will start waiting for the download other purchases. After a short demo on the features of the DualSense controller, the game catapults us into the hub from which to access all levels and it is from here on that a smile will be printed on your face that will not disappear for the rest of the game.

Astro's Playroom is essentially a platformer tridimensionale, which recovers a lot from titles like Super Mario 3D World, with rather short and linear levels but very accurate in every minimum mechanic and interaction. There is very little room for repetition or tiring mechanisms, in a constant bombardment of novelties and types of gameplay that maintain thevery fresh experience during the entire playing time. The difficulty level of the title is really basic, almost non-existent, and makes the package a sort of celebratory walk to the console and its history, usable by any audience. Complete the approximately two hours of gameplay, one speedrun mode with custom levels it keeps the title alive, thanks also to the ease with which PlayStation 5 allows you to access the levels with the new activity cards. In fact, by pressing the home button you can view different levels available, the time, the percentage of completion and the possibility of entering the game by pressing a after an essentially non-existent loading.

The title bursts with enthusiasm from all pores.

Most of the levels are rather traditional as platform gameplay, but the highlight is obviously represented by the interactions with the new DualSense. Astro's Playroom is in fact totally built around the idea of ​​exemplifying each of the controller's novelties. Each step of the little robot is returned by vibrations of the haptic feedback of different nature according to the trampled material; the rain of a few levels creates subtle clicking sounds at the top of the shock while the electric shocks violently vibrate each part with a precision and spectrum in the strength of the vibrations unheard of in any controller before. Even better than the already fantastic haptic feedback are the adaptive triggers: Set in luster by different mechanics, these can create different levels of resistance or various click or rumble scales directly on the trigger.

The best example is a level where, as a monkey robot, you climb up a climbing wall and each attachment point generates a sharp click on the trigger which is then released and redeems backwards like a spring. The words are obviously not sufficient to describe the peculiarity of the physical and tactile response of these mechanisms but we are very sincere in saying that yes, the DualSense as it is proposed can represent a great evolution in the field of immersion of game controllers, and Astro's Playroom really goes to great lengths to prove it. Some mechanisms work less well, such as those that bring into play the controller touchpad in a not very exciting way, but overall every single mechanic bodes well that future titles like Ratchet & Clank: Rift Apart will be able to take advantage of these lessons.

In addition to being a wonderful journey into what the DualSense controller is, Astro's Playroom is also a nostalgic tribute, almost as a constant tear, to the entire history of the PlayStation brand. A backbone of the world of video games with more than twenty-five years on his shoulders, all represented with love, passion and a wealth of details in the game levels. Come on cameo of Sony IP characters and third parties, to ultra-detailed collectible models of consoles and peripherals, up to the exciting end-of-level screens with interface and music from past consoles, Astro's Playroom is the most successful a celebrazione of playing on Sony platforms for as long as they have existed. The title itself is also thematically set within the PS5 itself, with a central hub and worlds with levels named as the console components: CPU, GPU, Memory and SSD which then exemplify all the parts of the new gigantic hardware.

The technical realization is not the flagship of the production, yet Astro's Playroom manages to delight also from this point of view thanks to rich textures, graceful models and a perfect image cleaning given by the native 4K resolution with perfect fluidity at 60fps. This will certainly not be the title that will delight your eyes with its next-gen qualities - for that you can turn to the dynamic lighting of Demon's Souls or the Ray Tracing of Spiderm-Man Miles Morales. Furthermore, it should be noted that many assets of the title are evidently recycled from the previous production of Asobi, AstroBot Rescue Mission, without however falling into copy-paste thanks to the "PlayStation history" filter through which the whole ensemble has been passed. Speaking instead of the colonna sonora, also this takes the sound and the melodies in Rockets sauce of the past titles of the robot Astro, also in this case with some variations on the theme, for a fun result to listen to. Valuable work has also been done on the sound effects that embellish the interactions with the DualSense and its small speaker, and give an exciting nostalgia effect with the many music from the past of PlayStation and its interfaces: from the orchestral intro to the XMB, to the dreamlike and disorienting PlayStation 2 startup melody.

I played Astro's Playroom for about four hours with the pre-installed copy of the PlayStation 5 I bought myself. 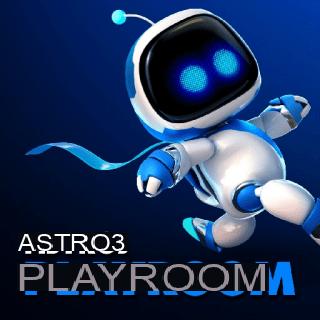 So how to comment on the new small Asobi Team production? Resuming Jim Ryan and its “We'll let the games do the talking”, we can actually confirm how much Astro's Playroom actually is a game that talks a lot, and it does it pretty well. Tell the player about the wonderful success story of the PlayStation brand and tell what not only DualSense can do, but also the ecosystem of PlayStation 5 with its instant uploads and the activities of the new UI cards. After completing this little gem, we can't wait to see the impact of this concentrate of splendid ideas will have on all the developers of the titles that we will play in the future on PlayStation 5.

Without surprising with particular next-gen technologies, the title is clean and fluid and enriched by a great attention to detail of the settings and the infinite easter-eggs.

Fun, evocative and engaging, the sound sector of Astro's Playroom is simply perfect.

A two-hour walk in platforming sauce between the past and future history of PlayStation, between what it was and what it can be in the future thanks to the new DualSense.

Did you like the article? Share it!
Audio Video Astro's Playroom review: the best tech-demo ever
Shadow Lugia is good and how to best use it in Pokémon Go ❯

add a comment of Astro's Playroom review: the best tech-demo ever