Blacksad: Under the Skin - the long goodbye of the black cat

Comics and videogames are increasingly colliding worlds, many works seek fortune by launching themselves from paper to videogame treddì with mixed fortunes and this time it is Blacksad's turn to leave the inked paper to get involved on the consoles of millions of fans. For those who are not well versed (bad, I told you about it in depth in the episode of Mind Travel dedicated to detectives) John Blacksad is an anthropomorphic cat by profession private detective, protagonist of the homonymous comic series born from the pen of Juan Diaz Canales and drawn by Juanjo Guarnido, debuted in XNUMX with Somewhere among the shadows which were followed in the following fourteen years by four books: Artic Nation, Anima Rossa, L ' hell, silence, Amarillo.

Blacksad: Under the Skin marks the return of John ready to elbow with the criminals of a 50s New York, inhabited by a multitude of zoomorphic species all too human in the vices and passions that wink at the clichés of literature classic like Phaedrus's fairy tales.

NOIR UNDER THE SKIN

Set between the events of Artic Nation and Anima Rossa, the incipit of the investigation is entrusted to his friend Jake Ostiombe, a gorilla expert in boxing already met in Somewhere in the Shadows, who instructs Blacksad to investigate the death of the coach of boxing Joe Dunn on behalf of his daughter Sonia. To complicate matters is the disappearance of the rising star of boxing Robert Yale, protege of Dunn, who two weeks after the murder will have to play the match valid for the title against the reigning champion, and if Sonia does not show up she would lose the gym inherited from his father.

One of John's metanarrative pearls: "But, from time to time, you meet someone with so little personality that they deserve to exist only as a stereotype"

The synopsis seems like a cliché taken from one of the many noiras of the last century with boxing in the background as The Set-up (in Italy "Tonight I won too") that the LA Noire players will remember the case "The trap ”, But Blacksad soon realizes he is dealing with a far more complicated puzzle than he thought. A big point in favor of Blacksad: Under the Skin is the attention given to the morale of John and the characters, who often deviate from conventional behaviors to be much more complex than one might expect, allowing the game to tackle strong themes such as racism and child prostitution, reaching its peak towards the conclusion of the investigation in which a couple of bloody scenes will catch you off guard, betraying that cartoonish feeling given by the representation of the characters.

The gaming rig owes a lot to Telltale games and in particular collects the legacy of The Wolf Among Us, another videogame transposition of an investigative comic, but is embellished with elements typical of Sherlock Holmes by Frogwares; this means no inventory, which is already a novelty given that Pendulo Studios have worked on the Runaway series and The Next BIG Thing, and no puzzles but to move forward in case we will have to rely on the collection of clues to be assimilated to formulate hypotheses to be linked together. to develop a theory then useful to pursue suspects during the dialogues.

THE SLOW (VIO) ARM OF THE LAW

Based on our questions and answers given to the various characters, the plot takes a specific direction, although most of the crossroads simply serve to shape Blacksad's character and do not affect the adventure, crystallized into a menu page full of bars indicating the tendencies of our John: if we generally adopt a more or less direct attitude, we are empathic or cruel and if our choices are leading us to a richer or as usual small fee. These voices do nothing but give us the perception that each walkthrough is different from the other, but in reality the crossroads that really make the difference are few and even the alternative endings do not change drastically. A note of demerit in this regard is that often you just have the feeling that you have a choice, when maybe three out of four options lead to John's death or not obtaining a test forcing us to replay that section by selecting the only right choice.

In addition to the formulation of the hypotheses, another mechanics borrowed from the Sherlock Holmes is the visual analysis of the characters that allows us to identify smells, noises and details of the interlocutor to be used in the interrogation thanks to the feline senses of Blacksad.

But the life of the private investigator is not only made up of gossip and collection of evidence but also a lot of action, punctuated by the notorious Quick Time Event so dear to Telltale Games. They may not like it and actually often turn out to be overly tedious, but for the type of excessively constipated movements that all the characters of Blacksad: Under the Skin have is a more than acceptable compromise that enhances the topical scenes by speeding them up compared to the rest of the incredibly woody gameplay so as to remember the obscene controls of the first Resident Evil.

A PAST THAT RETURNS

The narration is fluid and unravels the plot little by little in a clear way, never completely showing the design behind the events, enriching itself with many references to previous works to be discovered by exploring every nook and cranny and exhausting all the options in the dialogues. Thanks to this modus operandi we can trace Blacksad's relationship with his old acquaintances Jake Ostiombe, ex gorilla (in name and in fact) of the late actress Natalia Willford, Blacksad's old flame murdered in the first adventure whose dross still disturbs John; the commissioner Smirnoff naturally a German shepherd with whom there is a tacit collaboration agreement; the reporter-nosy weasel Weekly, tireless and adorable helper of the big cat.

Throughout the game Blacksad lets himself go to more than a moment of meta-narration, that is, narration and references to the investigation in which Blacksad tells himself how he knew he was in a detective story, coming to wonder if what he is in is a English novel (à la ten little Indians by Agatha Christie, in which the murderer is present from the first scene) or an American thriller (in which in the end the protagonist's brain is useless because the mystery is solved only in the very last lines).

It will take us to deal with the case not less than ten hours, however, achieved quite artificially thanks to the really slow movements of the protagonist and to the films that must be watched in full always and in any case. After the first game, a second game is recommended to find all the stickers and complete the football, baseball, boxing and hockey sections of the album scattered in the game's locations, taking advantage of this to unlock the other endings as well.

TOO MANY BUGS FOR A WORLD OF ANIMALS

Given that in any self-respecting investigation there is always the catch, this cannot but also apply to Blacksad: Under the Skin which is betrayed by a technical sector not up to par and by many, too many, bugs. The character models are not to be thrown away but are too plastic and do not do justice to Guarnido's beautiful tables, improving during the interlude phases but dropping dramatically during the actual game arc, with often sparse outline settings decorated with repeated textures. creating an unpleasant alienating effect, a result well below expectations which is partly attributable to the lack of experience of the Spanish software house Pendulo, the first game made entirely in 3D.

If graphically Blacksad leaves something to be desired, the soundtrack manages to patch up some holes with some jazz music with a distinctly hard boiled flavor who cast the player in the role of John making him savor every stakeout in the moonlight, with a separate mention due to the English voice actor of John Barry Johnson already mapped in Detroit: Become Human (to whom the Mind Travel on freedom of choice was dedicated ), personally chosen by Canales because of the low voice necessary to make the tone of a heavy smoker such as Blacksad.

We were talking about bugs, unfortunately the game is devastated: it often happens to see a cutscene without hearing the voices of the characters but only the background noises, the polygonal interpenetration goes to be blessed more often than we would like to find our Blacksad stuck in a forklift and magical characters that levitate and practically always we have to come to terms with a camera that gets completely high preventing us from controlling John's actions and in some cases desperate real stuttering phenomena that force us to return to the main menu and hope that everything goes well.

I investigated the dark alleys of Blacksad: Under the Skin with my trusted PC equipped with Ryzen 1600 and Sapphire RX580 with 8gb of Vram and as many of ram. All on a 144hz AOC monitor (but the framerate was fixed around 70) with Logitech G402 mouse and Cooler Master Quickfire XTI mechanical keyboard. 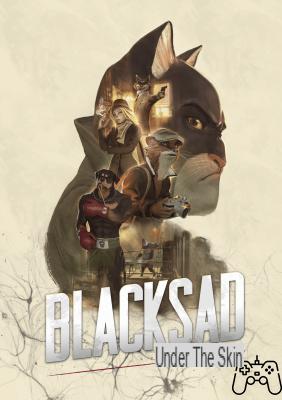 It is useless to go around it, from the videogame debut of John Blacksad we expected better. Although writing is clearly a point of continuity with paper, Under the Skin fails to match the sensations that Guarnido's splendid tables return to the reader limping on a graphic sector that often leaves something to be desired overwhelmed by glitches and bugs that affect the gameplay, already imperfect of its own, but at least the soundtrack and the Anglo-Saxon dubbing manage to put a piece where possible but the feeling of great potential partly wasted remains.

Blacksad: Under the Skin is clearly intended for longtime fans (who won't have missed the Collector's Edition with the beautiful resin action figure) who yearn to play John and lead the first-person investigation, but even to those familiar with the Telltales and Frogwares games who will immediately find themselves at ease in the role of the most disenchanted black cat in New York. Available at a cost of € 49,99 on PS4, Xbox One and Nintendo Switch and the usual ten less on Steam, the advice is to wait for a substantial discount so as to give the developers time to solve the numerous problems that afflict the title , and in the meantime fraternize with the world of Blacksad, Smirnov & Co. recovering the stories published in full edition last year.

Not nearly as high as Guarnido's tables.

Apart from some sporadic missing dialogue, the jazz music is perfect for recreating the noire atmosphere and the English dubbing is really suggestive, especially Barry Johnson who plays John.

All mechanics already seen but they work properly and make the investigation interesting, but the ultra woody movements of Blacksad and the multiple bugs penalize the vote.

Did you like the article? Share it!
Audio Video Blacksad: Under the Skin - the long goodbye of the black cat
Rainbow Six Siege Operator's Guide, Part 4 ❯

add a comment of Blacksad: Under the Skin - the long goodbye of the black cat