Code Vein, in addition to soulslike mechanics there is more!

We have all noticed how, in recent years, From Software has made school, defining a videogame genre that can be easily declined by small, medium and large software houses. After the numerous The Surge, Nioh, Lords of the Fallen, Remnant: From the Ashes, however, the time has come for Code Vein, a title developed and distributed by Bandai Namco that has managed to attract the attention of the public for its artistic style. inspired and able to conquer the vast audience of manga and anime lovers (not those of Dark Souls, of course).

Now the game has hit the shelves, digital and otherwise, and is ready to deal with an increasingly frenetic market and increasingly inclined to leave no room for mediocre titles. Penalty: being forgotten within a few weeks. Will Code Vein manage to carve out his slice of fans?

Will it be worth it to use your time to help the Revenants get out of the cycle of life and death that forces them to a life of violence and hardship?

The history of Code Vein, since its first notes, is not in the least trivial and manages to be the bearer of a high concept with a strong impact. In the title Bandai Namco we will play a mysterious character with no memory, who will find himself catapulted into a world populated by revived, creatures that, in order to survive, need to drink blood. In case they fail to eat, Revenants have the characteristic of going mad and turning into terrible creatures devoid of any inhibition, which allowed an individual named Silva to obtain "commercial" control of the drops of blood and to establish a sort of empire based on the purchase and sale of this rare "bargaining chip". Our protagonist, in the first hours of the game, will find himself having to deal with a past he does not remember, With own mysterious powers and with Louis, a Revenant at the head of the rebellion who no longer intends to submit to the power of Silva. This is just the beginning of a story that, throughout its duration, manages to keep the player's attention high and give some well-placed twists (as long as you come to terms with the Japanese register of history).

It will be enough for you to start your new game of Code Vein, moreover, to realize that you are faced with a type of narration far from what From Software has accustomed us to (Sekiro aside). The story features cutscenes, optional dialogue and text files like the most classic of the JRPGs, drawing heavily from that kind of tale. In fact, there is no shortage numerous psychological insights dedicated to our adventure companions, which will give you the feeling of being managing a real party of characters in several moments and without ever transmitting any kind of loneliness. Precisely the aforementioned secondary storylines, sometimes seemed to us not very inspired, presenting narrative topoi that are often mediocre, sometimes redundant and, only in some cases, really brilliant. Nothing to say, however, about the development of the plot which, although it sometimes evolves too slowly, never gets tired and keeps the gamer's hands firmly on the controller.

Monster hunters? We must have it in the Blood Code!

That Code Vein owes a lot to Miyazaki's works is extremely evident, but classifying the Bandai Namco work as a simple soulslike clone could be a big mistake. Although the basics of the combat system actually seem to come from Dark Souls and the game has some structural elements that they already know, it is the management of one's character that comes out with pride with one's head held high. In the course of the game, in fact, we will come into possession of the Blood Codes, or "classes" that we can freely equip to have access to unique abilities and powers. If at the beginning of the game we will only have the codes of the Occultist, the Ranger and the Fighter, it will be enough for you to proceed for a few hours to understand the vastness of this game system, which it presents more than twenty different versions, with related power ups.

As already mentioned a few lines ago, it will also be possible to change code very easily, allowing us to vary style with the same simplicity with which we can change the weapon. This guarantees a much more varied approach to the game and, unlike From Software titles, there will never be the need to restart the adventure to change your stats.. It will be enough, in fact, to prepare a different build to groped to overcome a passage that, with our current Blood Code, could be too complex. All the Codes can obviously be strengthened in the Viscous, or the counterparts of the Dark Souls bonfires. Through the Vischi it will be possible to recharge one's energies, improve our skills and carefully manage the Blood Codes, provided a classic respawn by all enemies. In Code Vein we will face the adventure always in the company of an NPC, but do not be scared: its usefulness during the fighting does not in any way unbalance the game difficulty, which is always high and exciting. The partner, especially in the more advanced sections, just heals you in a couple of moments, but never really interferes with your play actions.

That's why the sector exists multiplayer.

Just like the From Software titles, in fact, in Code Vein you can also travel in the company of your online friend, but, which is bad enough, we have not noticed a real increase in game difficulty. This, therefore, allowed us to distance ourselves easily from complex situations, while significantly lowering the challenge rate; even if we admit we got excited in a couple of fights with our friends.

An anime with dark colors

We have already mentioned it at the beginning: Code Vein has managed to attract the attention of players for its visual style, deeply influenced by the latest animated productions of the Rising Sun. It goes without saying that the character design of the characters is as stereotyped as it is perfectly successful and in line with the canons of the genre. The editor of the protagonist is also impressive which, literally, will allow you to create your Revenant from scratch, granting you a freedom that is nothing short of shocking and, at times, confusing the player for the amount of small adjustments available. Unfortunately, not all that glitters is gold. If style can be said to be successful and engaging, the same cannot be said of the polygonal models of the charactersi, some textures and some animations, which are sometimes a bit too clumsy and old-fashioned. Nothing disastrous, mind you, but far from the care taken in the overall design of the work.

The Go Shiina soundtrack is flawless, which you can hear above and which manages to stage epic, dramatic and frenetic moments with an sometimes unnatural simplicity. On the other hand, the English dubbing is not exciting which, in several places, seemed a bit too subdued. Different speech for the Japanese track which, thanks to a lesser understanding of the language on our part, seemed more inspired and in line with the style of the game. Obviously, whatever language you decide to use, the game has subtitles in Italian, almost always correct and present with the right timing on screen. Despite the first days the title presented more than a few frame drops, we admit that with a couple of patches and with the progress of the game we no longer encountered major technical defects. There are obviously some interpenetrations, but nothing that goes to damage the final game experience, which we therefore feel we can recommend not only to lovers of soulslike.

Code Vein, in fact, is much more than it seems or wants to appear. The plot has been able to give us truly inspired moments and we reiterate how the presence of the Blood Codes has been able to convince us to the point of hoping to see it used again in the future. It matters little that some characters are sometimes stereotyped and that the battle system knows already seen; Code Vein entertains and entertains for all 30/40 hours of duration. Even in terms of aesthetics, the Bandai Namco title compensates for non-exciting polygonal models and some too much interpenetration with a well-defined style and strong appeal for manga and anime fans. In short: if you are looking for an action RPG with a strong impact and if you are attracted by the graphic style, Code Vein could not only be the title for you, but one of your favorite titles of this very rich 2019.

We played Code Vein on PlayStation 4 Pro via a digital code. During our test we were able to test the title both without the first patches, and after the main stability updates. 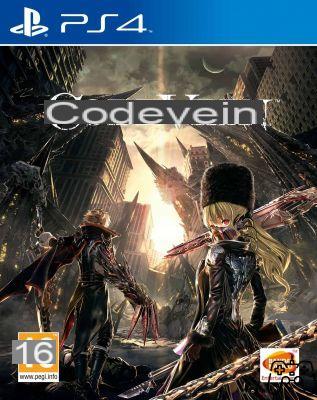 Code Vein has a technical sector that is as clever and functional as it is not devoid of defects. If the character design of the characters is perfect for fans of manga and anime, the same cannot be said of some subdued polygonal models and some animations that are not at all exciting. Small flaws, in the face of a title that often manages to amaze and that we are sure will be able to conquer all those who, like us, grew up on Japanese bread and cartoons.

The Go Shiina soundtrack miraculously manages to always be consistent with what is shown on the screen and to enhance in more than a few sequences. The Japanese composer, in fact, has done a superfine job, guaranteeing a performing soundtrack both during epic moments, as well as sad or adrenaline-pumping ones. The language of the Rising Sun is also recommended for dubbing, which is clearly better than its English counterpart, sometimes lacking in bite and unable to completely conquer the player.

From a playful point of view, Code Vein alternates elements that they already know with extremely successful intuitions. It doesn't matter if the combat system seems to come from the main From Software series, because Bandai Namco has managed to introduce an idea as simple as it is successful: the Blood Codes. Through this aspect of the gameplay, the player will be led to experiment continuously, looking for their perfect build and having fun modeling the protagonist according to their own style of play. All the surrounding aspects of the production, on the other hand, work perfectly and contribute to creating a game that, first of all, is fun. And we can't ask for anything better.

Did you like the article? Share it!
Audio Video Code Vein, in addition to soulslike mechanics there is more!
List of the best Call of Duty Vanguard snipers ❯

add a comment of Code Vein, in addition to soulslike mechanics there is more!