When in a few years they will ask us to tell the experience of Animal Crossing: New Horizons on Nintendo Switch the memory will certainly go to the complex period in which it was published. Being closed at home and with little chance of having social interactions, video games have taken on more of the aspect of entertainment and escapism, which could be considered almost therapeutic. A colorful and carefree outdoor life simulator, such as this Nintendo product is, has the power to make quarantine much lighter, to light up even the gray of today's uncertainty with serenity.

This premise is important to understand how the evaluation of this product can be influenced by the current situation. This pandemic crisis unintentionally became the best time the game could hit the market. Perhaps in another more serene period we would have lived this new episode in a much less passionate way, we would have seen the island of happy pets employed by Tom Nook in a much more disenchanted way. Obviously, even without constraints, the escape into the rainbow world of these little animals undoubtedly represents a perfect breaking point with the gray routine.

Animal Crossing is one of those series that almost everyone has heard of, but that many have never had the courage or interest to play. Life simulators are complex video games not suitable for all palates and the colorful and unrealistic environment of anthropomorphic inhabitants appears naïve in an extreme sense, but equally enlightening at the same time. Animal Crossing: New Horizons is a slow experience which should be taken as a relaxing adventure, without the rush of wanting to get results. Landing as a new inhabitant of the island at the beginning of the game is like making a pact with your childish soul, like sipping a cup of hot relaxing herbal tea to savor its scents.

Yes, he will have a tent (later a house) available to expand by paying the debts to the administrative manager of Tom Nook and then get to partially manage the flow of new inhabitants on the tongue of land, to contribute to the creation of public structures and shops, to enrich the museum collection and to keep the beauty of the public green under control. The differentiation of activities of this simulation obviously has as its final goal to accumulate game currency to furnish your home in the most extravagant way possible by exploiting thehuge amount of objects and furnishings available in the game. The size of the catalog is difficult to explain in words since already in the first days of the game you can perceive the variety of available styles and possible variables. It is not just about beds, wardrobes, tables or kitchens, but also knick-knacks, toys, decorations and even huge monuments, billions of possible combinations to create the house of your dreams and the most imaginative strip of land in which to feel like skilled urban planners. Added to this is the ability to customize some objects that makes the game feel like a fusion between the experience of the main series and the Happy Home Designer spin-off. Being pleased with the work done is facilitated by the excellent freedom of movement of the camera in the internal areas, which unfortunately in the external environments remains blocked to the vertical movement only in three positions but which nevertheless offers an overview of sure effect.

The recovery of each resource is essential for the new mechanic of crafting.

To create the most beautiful house and island, you will need to accumulate money by searching for anything Tom Nook and his helpers could wish for. This “commercial” prerogative has hardly changed in Animal Crossing: New Horizons, leaving shells, fish, insects, fossils and fruit the main form of sustenance. The daily work of collecting items for resale is the first step every time you start the game, because without money you can't sing mass. And when the daily routine of collection-sale-purchase seems to veer towards boredom, periodic events, unexpected visits and the progressive expansion of personalization that the game makes available.

In reality, the recovery of every resource that the island can offer becomes even more essential since it becomes essential to face the great novelty of crafting and item creation which, however, is not obsessively present in all activities, but especially in the equipment to be used daily - which often break - and in some special furnishings that cannot be obtained except during events. The gameplay has not been modified, but enriched by this well-conceived structure which fortunately does not aim to emulate other games that make crafting their workhorse (did anyone say Minecraft?).

Another novelty is the Nook Phone which includes, in addition to the game menu, also a series of objectives - general and daily - to be completed in order to obtain another very useful game currency in many situations. This is a mechanic of micro rewards for mobile gaming that however does not push you to play every day but, fortunately, fills the time you dedicate to the title with challenges. However, in the melting pot of activities there is no shortage of small absurd shortcomings and questionable choices - such as not being able to create more identical objects together - that slow down and break up the gameplay.

The bitter taste of online

Animal Crossing will not fail to offer cover landscapes.

The bucolic life of a serene island is emphasized by the colorful realization of each element of the game which, although simplified in the forms, shows a detail level amazing if you think that the series comes from Nintendo 3DS. What bewitches is the care taken in the management of shadows and in the changes of light and lighting both in the landscape and in the interiors. Animal Crossing: New Horizons will not fail to offer postcard views worthy of taking advantage of the photo mode present in the game. Obviously there are minimal defects and uncertainties of aliasing and overly stylized textures and in some cases they seem to clash with the preciousness of the scenarios, but they are small néi in a sea of ​​sweetness.

As per the tradition of the brand, thesocialization with the inhabitants is limited to platonic exchanges of gifts and naive compliments or favors to do, thus maintaining the possibility of being played across the board from any age, but leaving some void when it comes to giving birth to something more than a sympathy. We would never want to see explicit acts in the game, but getting to see a wedding in the game wouldn't be such a bad thing.

But the idyllic world of roses and flowers of Animal Crossing: New Horizons faces the great rock of the online that does not hold the weight of the depth of the game. The cumbersome online communication has started, with more than one stake to avoid the arrival on their islands of overly aggressive and vandal players. But even the best friends have little to do because everything is limited to shopping, crafting objects and animals, giving furniture or other items and taking advantage of the shops. Especially in the early stages of the game there are few activities to do in company and in general the constraints deriving from multiplayer services are a bit castrating. Future updates, which will certainly be numerous, may change this scenario, albeit not radically. The events and their continuous succession during the year will also be the yardstick with which the longevity of a game that can easily find support for at least a year can be established.

Having bypassed the first week of acclimatization, I deepened the game until I reached the first thematic event on my Nintendo Switch, both in laptop and in TV mode. 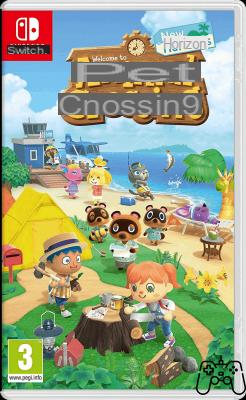 Animal Crossing: New Horizons represents an innocent escape, a safe harbor in which to stop once a day but from whose coasts it is right to leave often to avoid that the routine from which you want to escape in real life also takes possession of the islet on which you land. On Nintendo Switch the series arrives juicy, like a ripe strawberry to be savored. The mass of contents and furnishing elements for interiors and exteriors is such as to whet the desire of the most inventive architect, albeit with the canonical limits of the grid of the space. Getting to build a lighthouse and / or a Gundam, the pride of one's happy atoll, is an undeniable pleasure.

Nintendo, as usual, proposes its less realistic and more platonic vision of life simulators, deprived of complexity and reduced to the bone as regards the revival of the mechanisms of social life. You get used to the absurdities of gameplay and situations that arise because Animal Crossing is an out-of-this-world fantasy journey. A moment of escape which, however, in an attempt to create bridges between players via the online, runs into very limiting interaction choices and few multiplayer activities.

This is the only drawback of a title that has come propitiously in difficult times. Animal Crossing and the opportunity to break through the door of fantasy by flying into a fantasy world is often needed, now more than ever. When tomorrow we return to breathe the clean air of the world we will need less of Tom Nook and we will leave him only a more miserable space of our free time. Because Animal Crossing should be enjoyed in small bites, for a short time, every day. If experienced as an evening walk in nature, it will be able to offer a genuine catharsis from the waste of everyday life.

Bewitching light and shadow effects surround a colorful naive postcard world. The pucciosa island of Animal Crossing is a feast for the eyes and the heart.

Hearing the inhabitants of Animal Crossing speak can be annoying in the first moments, but once you have overcome the first obstacle you will perceive the innocent joy behind their sound and you will appreciate all the contours of music and sounds that melt even the most arid of souls.

The novelty of crafing and the amount of objects available make Animal Crossing: New Horizons a concentrate of opportunities for every interior decorator and administrator of islands. Too bad for the online, castrated and with very little interaction, which deserves something more.

Did you like the article? Share it!
Audio Video Animal Crossing: New Horizons, an innocent escape
Horizon: Zero Dawn ❯