My Friend Pedro: Jump, shoot and obey the banana

"Hey you, wake up!". Her head still hurts, her vision is blurred, and the tinnitus bites her eardrums. I try to get up but I feel a great pain in my back: the first thoughts are racing and I try to remember how long I have been lying on the street, thrown on these dirty boxes.

There is a voice calling me: I raise my eyes with difficulty - I still have a strong sense of nausea - I see a small floating banana that smiles at me, asks me how I am: "It could be better" I reply, "my bones still ache …" Wait, a talking banana ?!

I rub my eyes but she is always there in the air, with a smile on her skin. It's Pedro, my friend Pedro! He tells me that there is no more time to waste and that we have to go. It doesn't matter who comes before us: we will kill them all. It will be a massacre. The journey I never thought I'd take has just begun.

The extravagant journey of My Friend Pedro it starts roughly like this: the player, after having learned some parkour techniques and the main gameplay features through an interactive tutorial, begins to clash with a myriad of enemies, level after level. These are collected in various 'worlds' or in any case areas that differ both for the setting and for the main enemy to be defeated. And these boss fights are the most difficult moments you will face while, all the others, will never worry you that much.

Who wouldn't follow the advice of a talking banana?

In any case, from this point of view the work of DeadToast Entertainment has thought of everyone, creating three very different levels of difficulty that force the user to take a different approach. The simpler mode is generally a balanced gameplay experience, with enemies having normal reaction times and the life of the protagonist tripartite and rechargeable. In the more complex, however, there is no recovery of life - if not through medical kits that are rarely found around - and the enemies react very quickly, with great precision and inflicting a lot of damage.

At this juncture, My Friend Pedro it could often be frustrating but it comes close to what we believe was the original idea of ​​the developers or a title that requires a mix of strategy and study of the environments, in addition to the skill and precision of the shots. But why make a clarification of this type in the beginning of a review? Well because unfortunately, for how it was built and built, the game published by Devolver Digital left us a bit dumbfounded, resulting generally and technically sketchy, not too far from the size of the flash game it was about five years ago.

Without beating around the bush, technically on Switch the game turned out pretty bad to see - especially in tablet mode - with dull and cheesy textures; on TV it doesn't change much except for a patina that adds a bit of brilliance to the scenarios. Also in terms of animations, the protagonist performs jumps, somersaults and bounces off the walls but appears woody and tired, far from the idea of ​​freshness and dynamism that we would have expected from an athletically flawless character like this.

A control system that is more lethal than enemy bullets

But in addition to these, which are for obvious reasons the first elements that catch the eye of those who approach the title, another decidedly more annoying is added: the control scheme. In an absolute sense, it is one of the most important elements to pay attention to when developing a video game: what is, in general, an excellent technical sector or a brilliant plot if the controls we interact with are unnatural and counterintuitive? In this specific case the game cannot and does not want to focus on the narrative aspect, limiting it to the dimension of an absurd and extravagant pretext to keep the character going, but neither does it offer a comfortable and easy to learn key system.

In particular, the problem arises when we want to alternate the fire with the move to dodge the blows: said so, we admit that it may seem an out of the ordinary situation but I guarantee you that it will happen often - as you can see below in the image - to shoot at two targets at the same time and want to dodge the shots that come at you. To do this, the game requires you to point the two analogs at the enemies, hold down the left and right triggers, in addition to the left bumper. A situation of extreme chaos that could send you into confusion several times, causing you to die miserably, devastated by enemy bullets.

Unfortunately, throughout our test around five hours, during which we completed the game and experienced the three levels of difficulty, we could not get the idea of ​​a development that was a little pulled away from our heads, based on the unexpressed potential of a fun and original game concept. Jumping from wall to wall, throwing pans in the air and using them to deflect bullets is really fun as is experimenting with the various weapons at our disposal such as pistols, assault rifles, submachine guns and shotguns, or wielding two. of the same type to take out multiple targets at the same time.

Even in this case, however, a game system that is not very precise, forces the player to often and willingly resort to the functionality of the Focus or a sort of slow motion, which is activated by pressing the left analog, useful for dodging and counterattacking in the middle of a storm of bullets. Always in the sign of an almost absent balance in the game system, you will soon understand that this is a function that is all too convenient to use to solve any conflict. And also, the fact that the respective bar recharges with each kill, guarantees you practically unlimited use until the end of the fight or level.

My Friend Pedro lands on PC and Nintendo Switch and brings with it a series of worlds and levels - complete with boss fights - to hone your killing technique, under the orders of Pedro, a bloodthirsty sentient banana. 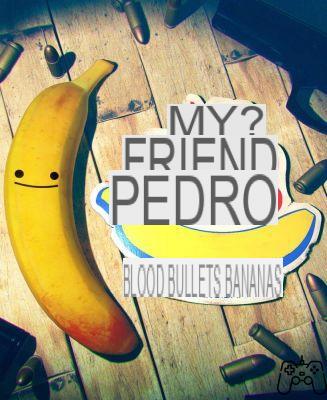 My Friend Pedro is a game that comes from an idea of ​​fun and peculiar gameplay but that fails to assert itself as we would have hoped, limiting itself to being a short, nice but very limited game from several points of view. A sign of how the team has taken care of a good idea but has not been able to decline it according to its own vision, can be found by looking at some of the worlds proposed towards the middle of the adventure that add nothing to the gameplay if not some sections annoying and unsuccessful puzzle. The development studio probably lacked the desire to dare and take some risks: unfortunately, the resulting result is a small title, sketchy and sold at a price that is too high compared to what it is able to offer.

Textures and effects not particularly beautiful to look at: dull in portable mode and slightly brighter on TV.

The sound sector does its duty but does not excel for one or more tracks in particular. The dubbing is instead absent.

A good gameplay structure which however never develops to its full potential. Also worth noting are some problems in the precision of the commands and some animations.

Did you like the article? Share it!
Audio Video My Friend Pedro: Jump, shoot and obey the banana
Can you catch a shiny Terrakion in Pokémon Go? - November 5, 2021 ❯

add a comment of My Friend Pedro: Jump, shoot and obey the banana