I would like to tell you about Erica; of how the gameplay conceived by Jack Attridge and Pavle Mihajlovic of Flavourworks allows the various levels of reality of the “film” to overlap, modify, link together in a flow without loading or menus; of that script signed by Connor Pots who draws the boundaries of a thriller halfway between Tarantino's gore and Kubrick's esotericism, obviously without approaching the quality of Serie A cinema, always assuming it exists… but I can't. I can't because even the images accompanying the review reveal, in part, ideas and implications of a plot that it must be discovered without any spoilers. Alas, we live in times corrupted by images, previews, screenshots posted on Facebook in the face of the embargo and if we consider that Erica was published by Sony Interactive Entertainment at the end of last August, well: you already know that it is an interactive film with multiple endings and a system of "choices" based on the DUALSHOCK 4 touch pad - or the companion app - which allows our fingertip to manipulate objects, assume peculiar attitudes towards our interlocutor or, more simply, move to a hotspot by modifying thus the story and the events shown on the screen.

The simplest parallel is the one with Detroit: Become Human (have you seen our photo gallery?). Erica is a film, shot with professional actors including the Terence Maynard of Edge of Tomorrow, which presents different lines of direction; several “stories”, if you pass the term to me, since everything will still revolve around the macabre death of Erica's father. The past, you know, is like the country postman: it always knocks twice, and so will our protagonist, now great, who will be sucked into a whirlwind of murders, esoteric rituals, drugs, experiments and the mysteries that are hidden in the basement of the Delphi House, the nursing home for psychiatric patients founded by Erica's parents.

Erica will be sucked into a maelstrom of murder, esoteric rituals, drugs and experiments

Reiterating the need not to tell you what happens if, instead of following the police officer into your neighbor's room, you look out the window of your room, the question I would like to answer is: “Is Erica a good video game? Do you deserve my ten euros? It is not that then I buy it and it ends up accusing you of circumvention of incapable because she sucks? ". Here, let's try to understand each other: Erica is a classic B-movie destined to die in that rating range from 65 to 75. If we judged it for the quality of the direction, of the photography, of the soundtrack signed by the author himself of those of Monaco: What's Yours Is Mine, Journey and The Order: 1886 (Austin Wintory) we would be talking about an essential (interactive) vision. Erica is beautiful to look at, the actors are not improvised, the Italian location is of the highest quality and, above all other considerations, playing it generates a sort of addiction, that is, it gives rise to the desire to discover all the possible storylines in a succession of runs that, at most, last two hours each.

Buying Erica means buying an indefinite number of thrillers to manipulate and if you like films like Eyes Wide Shut it will be useless to read me further: go and spend ten euros in all serenity. If, on the contrary, you are wondering: "Ok uncle: but in Erica there are nudes or are you circumventing me?", Then it is good to dwell on its angularity. First of all the control system: whether it is via touch pad, on tablet or smartphone via the dedicated app, it works badly.

"Ok uncle, but in Erica there are nudes or are you playing around with me?"

"It works badly" in the strict sense of the definition, that is, reaching with the fingertip the point indicated by the word we wish to choose and which encompasses, in its meaning, the attitude we want to have towards a given situation, is difficult. It has happened to me several times, both with the touch pad and with the smartphone, to have problems, not to make it in time and having to try again several times. It may be that with the tablet this problem of "field" and sensitivity disappears, but I am poor and I do not have the tablet, so meat. Secondly Erica is the "already seen" fair. From the bad guy who tries to hush you while hiding a tranquilizer behind his back with his right hand, to the policeman who dies like an asshole (can you write "asshole"? Well: I write it. Only once, of course, but I write it, too if I ask you not to say it out loud in public because then they call me rude), passing through the doctor full of secrets who does strange things to patients and the girl who can cock a gun and kill as if she had grown up on bread and Rambo since the cradle.

I played Erica on the smooth PlayStation 4 and a very good 32-inch Sony Bravia Full HD. 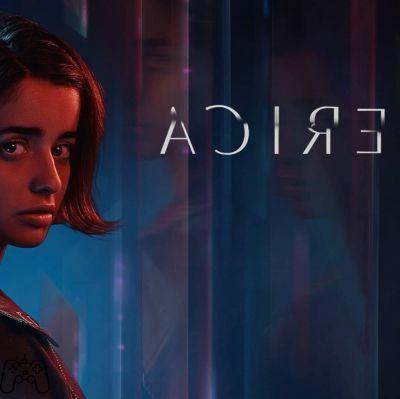 I realize, as I reread myself, that some may not understand the real potential of the game. While not having an explicit tree of choices like the one developed by Quantic Dream for that pearl of Detroit: Become Human, the beauty of Erica is precisely that of being a film to watch and re-watch even ten times, moved by the curiosity to discover not only the pieces of footage that have not yet been seen but also to understand which character is lying, if everything is the fruit of the protagonist's imagination, if it really is hidden in the basement of the Delphi House ... and no : I leave this to you because I have already spoiled enough, pretending not to spoil, and I used three subjunctives all in a row and I have to go get an Oki before asking myself whether I have used them correctly or not.

What rating should be given to the graphics of a film? So: the details are great, as are the animations (who knows what motion capture technique they used! Cage should copy them!). Lights and shadows feel real, as do the special effects of fire. I played it in Italian but I'm sure that even at the level of lip-sync in English we are around 100 (like "The wheel of fortune")!

Oh, really: beside the Austin Wintory soundtrack that seems to fit into the flow of the "game" almost magically, with a couple of extraordinary pieces (Aria for Delphi above all), the ambient sound effects seem to be captured live! No, it is up to ... but isn't everyone already doing this? I'll be back later, I'm going to see on Wikipedia.

Not very well, some would say. The control system is ugly. More than ugly, I would say inaccurate, unreliable, both on the PS4 touch pad (inconvenient) and on a smartphone (it constantly disconnects). As I wrote, I haven't tried it on a tablet.

Did you like the article? Share it!
Audio Video Erica's Warm Lips: Exclusive to PlayStation 4
Assassin's Creed Odyssey: Where to find the Cyclops ❯

add a comment of Erica's Warm Lips: Exclusive to PlayStation 4