Hunting for vampires with Castlevania Requiem: Symphony of the Night and Rondo of Blood

The package, released on the same day that the second season of the animated series Castlevania made its debut on Netflix, that is, on October 26, contains the porting by SIE Worldwide Studios of two of the best titles in the 2D saga, the first taken from the PC Engine version and the second from an edition released in 2007 as unlockable in Castlevania: The Dracula X Chronicles on PlayStation Portable.

Consequently excluding upscaling to 4K and 1080p, some rendering options and Trophy support, in addition to the use of the controller speaker that reproduces a slight ringing when picking up an object, the games are exactly identical to the originals. And in some ways, perhaps, it is better this way.

Castlevania: Rondo of Blood, originally published as written before on PC Engine, the console produced by NEC in collaboration with the Japanese software house Hudson Soft, re-proposes its structure with levels to be completed sequentially, even if there are some small variations compared to the classic platforming scheme to make the adventure a little less linear, and a gameplay focused on action, the jumps on the platforms and dozens of monsters to eliminate. But also all its high level of challenge: it is in fact one of the most difficult Castlevanias ever to play due to particularly difficult enemies.

The commands are rather responsive, despite some initial difficulties in getting carried away, and control protagonist Richter Belmont, descendant of Simon Belmont busy trying to free his girlfriend and little sister from the clutches of the Prince of Darkness, after a little practice it turns out to be very simple.

Completely different is Castlevania: Symphony of the Night, which even at the time of its release on PlayStation was defined as "revolutionary" by critics.

It was in fact the chapter that brought about a strong change in the series in terms of gameplay, character design and levels, introducing even RPG elements into traditional mechanics and giving birth to a whole subgenre called Metroidvania. And in fact it is just like that: just take the pad in hand to realize the differences with the prequel. The protagonist, Alucard, a dampiro son of Dracula and Lisa, a human woman, she moves quickly across the screen eliminating enemies and collecting items e upgrades to level up and equip weapons, armor and accessories that alter their vital parameters. All essential elements to cross Dracula's castle.

The game also features a non-linear progression, with a system open world which means more paths to follow, many secrets to discover and multiple endings, one of which even leads to prolonging the game: there is indeed a - SPOILER - to be explored from scratch until you face the real final boss!

In this edition the game, the more beautiful of the two present in the package, is re-proposed as mentioned at the beginning exactly like its PlayStation Portable conversion: this means a different dubbing and a completely revised Japanese translation. Which could make some purists of the series turn up their noses since at the time the localization with related changes to some lines of dialogue and other elements of the game were not very appreciated.

Thankfully it remains intact from the PlayStation version the soundtrack edited by the composer Michiru Yamane, which can boast songs ranging from techno to gothic rock, from new age music to metal. With classic pieces from the Castlevania series such as Vampire Killer and Bloody Tears rearranged in a modern way. 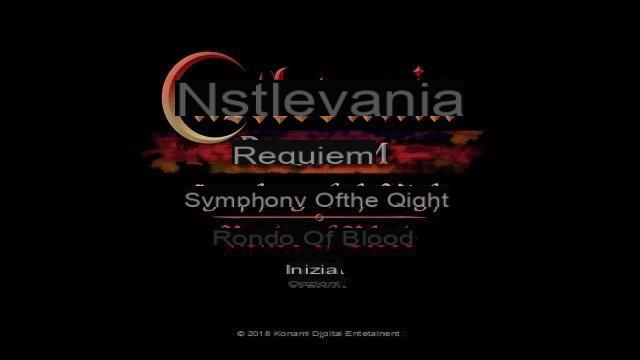 Castlevania Requiem: Symphony of the Night and Rondo of Blood offers the porting of two of the best gaming experiences of the Castlevania saga on the PlayStation 4. A package that does not introduce anything new for fans, but which can still attract the public thanks to the quality and playability of two titles still valid for the genre to which they belong, at the affordable price of 19.99 Euros, among other things.

The graphics sector is good, even if given the style it depends a lot on the tastes of the individual player: so those who do not appreciate pixels, take away 10 points from the total. Excellent character design and drawing of the various levels and enemies: much more beautiful obviously in Simphony of the Night, where the work of Ayami Kojima stands out, who also designed the appearance of the protagonist, Alucard.

Excellent musical accompaniment, characterized by decidedly evocative songs of the saga with special mention for the soundtrack of Simphony of the Night which boasts techno, gothic rock, new age and metal songs, as well as classics from the Castlevania series rearranged such as Vampire Killer and Bloody Tears.

Did you like the article? Share it!
Audio Video Hunting for vampires with Castlevania Requiem: Symphony of the Night and Rondo of Blood
Everything we know about rocket balloons in Pokémon Go ❯

add a comment of Hunting for vampires with Castlevania Requiem: Symphony of the Night and Rondo of Blood