Ni No Kuni on Nintendo Switch - How not to port

Nintendo Switch is experiencing a second half of 2019 to scream and September was certainly the hottest month: together with Link's Awakening and Dragon Quest XI S, the Nintendo console was the stage for another great JRPG fished out of the last generation of consoles: Ni No Kuni: The Menace of the White Witch originally released on Playstation 3 in 2013. However, the port is not quite as expected and compared to the great Dragon Quest XI S Final Edition, reviewed here, Level 5 and Bandai Namco are definitely sitting on their laurels.

The fate of Oliver

Ni No Kuni: Threat of the White Witch, at the time of its original release, seemed like a kind of lucid dream for JRPG lovers: a title capable of combining the gameplay skills of Level 5, former developer of Dragon Quest IX on Nintendo DS, with the unrivaled artistic mastery of Studio Ghibli. When we finally got the localized version in Europe, most critics and gamers were thrilled. Ni No Kuni: The Threat of the White Witch was, and remains, a rich and exciting JRPG in which to play the role of a tender little boy determined to save her mother and with it also an alternative world made up of cute magical monsters. The narration continues without major hitches and, although the massive presence of texts often slows down the pace, it will be difficult not to take the fate and sincere feelings of the protagonist Oliver to heart. In terms of content on the Nintendo Switch no additions are registered and the game is reproduced exactly as it was on Playstation 3.

The cutscenes animated by Studio Ghibli are not very many but all of exceptional quality.

A particular but imperfect fight

Combat is undoubtedly the focus of the game. While there are short puzzles, exploration stages in the world map and many narrative moments, you will spend more than two thirds of the adventure fighting. Level 5 has devised for Ni No Kuni: The Threat of the Ashen Witch a rather peculiar combat system that draws a few cards from the large deck of the JRPG action and a little from the turn-based ones. The result is a sort of third-person action with Kingdom Hearts-like action commands, in which you command, in Pokémon style, little creatures called familiars with a substrate of strengths, weaknesses, magic and tactics from traditional Dragon Quest. This apparent videogame encounter is actually successful: the fight is still fresh and fun today given its uniqueness never replicated by other titles, not even from his own follow-up Ni No Kuni 2 from 2018. However, this system was already lacking some finishing touches at the time: the automatic attack does not always find the right timing, the familiars often and willingly fit together in the chaos of the battle and the two allies guided by artificial intelligence have absolutely lacking behavior. Several of these flaws are executive and non-conceptual and unfortunately do not allow the title to have excellent gameplay. Precisely for this reason it is a shame not to see them solved in this new version. Still pretty and well managed is the phase of growth and personalization of their families although this too does not present changes, not even the inexplicable reset of the level of growth that occurs when they are metamorphosed. I must also report two crashes that occurred in the Monte Fornace area and caused the complete closure of the game with loss of unsaved data. A short online search confirmed the incidence of these serious episodes for several other users as well.

Ni No Kuni: The Threat of the Ashen Witcha arrives on Nintendo Switch with the breathtaking graphic style that already delighted us years ago. Thanks to a sequel on Playstation 4 not as successful from this point of view, the artistic wonders of Studio Ghibli still know how to amaze in 2019. The delicate cel-shading with bright colors, the character design and the obsessive attention to the details of the settings are just some of the strong points of an aesthetic system among the best ever seen in any video game. Porting to Nintendo Switch, however, is a mere task to be sufficient: 720p pales in comparison to the Full-HD and 4K of the Sony console versions and although in portable mode they look great, in docked mode they are absolutely unforgivable. No title of this importance, in my memory, has ever been released on Nintendo Switch without proposing improvements in the docked version which is in fact the portable one projected on TV. Even the game interface, which would not have affected performance, is not rendered at 1080p for a very low level result. The hardware of Nintendo Switch, modest but certainly superior to that of Playstation 3, has amply demonstrated that it can do more. The frame-rate is very stable at 30fps, as opposed to the 60fps of the Playstation 4 version, but I must admit that in this case I preferred it that way. Ni No Kuni is a very rare example of a video game whose art style is best rewarded by 30fps. This is because the greater fluidity of the Remastered versions on Sony consoles compromise the filmic rendering of the animations by creating excessive friction with the frame-rate of the splendid animated films by Studio Ghibli. There is also no news on the sound accompaniment front: the wonderful soundtrack composed by Joe Hisaishi and orchestrated by the Tokyo Philarmonic Orchestra rivals those of the animated films Studio Ghibli and dubbing always knows how to snatch a few smiles thanks to its heavy dialectal cadences.

The game's art style is still magical and doesn't seem to feel the weight of the years.

I played Ni No Kuni: Curse of the White Witch on Nintendo Switch with a personally purchased copy. After ten hours of play, I found that exactly nothing has changed since the version I had completed at the time on Playstation 3. I am currently pondering whether to finish it or not: I must admit that, despite everything, it has been able to catch me back. 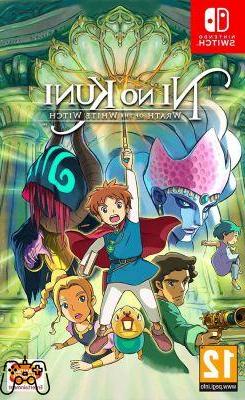 The marketing linked to Ni No Kuni: the Ashen Threat leaves no room for doubt: unlike the Playstation 4 version, the Nintendo Switch version does not have the wording "Remastered" shamelessly revealing the nature of a simple porting of the title. Said this, it would certainly have been legitimate to expect, after six years, some news, additions or adjustments to various defects that the game still carries with it. But nothing: same content, same resolution, same frame-rate, some new malicious bugs and an uncomfortable full price. The game remains to this day still considered one step away from the masterpiece, but this port on Nintendo Switch is an operation that we do not feel we can recommend under the conditions in which it was proposed. The final grade attributed to the security must therefore be read not only from the point of view of the average of the three evaluation parameters, but also on the basis of the considerations made on the porting operation.

If the artistic style devised by Studio Ghibli and Level 5 is still top marks, the same cannot be said of the technical level reached by the port on Switch. In portable mode the game runs beautifully in 720p at 30fps with perfect image cleansing. However, the total absence of improvements in resolution, not even in the game interface, in docked mode is unforgivable.

Also on the sound front no changes were made, and in this case it was not necessary. Both the excellent dubbing and the delicate soundtrack of Joe Hisaishi still know how to amaze.

The game structure, aged rather well, is still solid despite being accompanied by combat mechanics, between real-time and fixed turns, not always precise and exciting. The Pokemon-style handling of the pets hasn't lost any hits and is still capable of giving satisfactions.

Did you like the article? Share it!
Audio Video Ni No Kuni on Nintendo Switch - How not to port
Can you catch a shiny Snover in Pokémon Go? ❯