The theme post-apocalyptic has always been one of the most popular in the videogame field, where it arrived about two and a half years ago Sheltered. Just in light of how much time has passed since I tried the PC version of the game developed by Unicube, I was a little surprised to read about its arrival on Nintendo Switch as well. To this platform, in reality, the characteristics of Sheltered seem to match quite well: it is in fact a title that at least on paper lends itself quite easily to the portable experience, allowing the carrying out of game sessions of short duration to carry on one's own. match.

The setting of Sheltered shows us a world completely devastated by radiation where even a brief exposure to them can be lethal. The family we find ourselves in control is lucky enough to find a underground shelter functioning and completely uninhabited, thus making it its new home. It is obviously up to us to make sure that everything runs smoothly, making sure that the various characters have a way to satisfy all their physiological needs in the first place, and then improve the quality of their life underground by building what is necessary.

The main modality begins with the choice of all traits of the inhabitants of the shelter, including gender, skin color and character skills. You are really spoiled for choice, with the ability to take care of everything yourself or have people randomly generate the CPU. The latter is actually not recommended, because it is good to form a family that has a certain complementarity in the abilities of its members. The ability to fine-tune the aesthetic elements also allows us to create a situation in which we can identify more easily, finally also choosing a pet to keep inside the underground house. Based on the characteristics selected, each character can count on strengths and weaknesses, based on which divide the tasks among family members: the one most skilled with manual activities can for example be put to build the objects we need, while others with exploratory skills can go out in search of raw materials.

In internal management, all aspects must be taken care of: cleaning the air filter allows for example the group to continue to breathe underground, while food and water must be found in different ways. From this point of view Sheltered looks like a kind of The post-apocalyptic Sims, in which to take into account the need for family members to sleep. To succeed in the task of managing everything, the most important thing is not to get overwhelmed by things to do, maintaining a mental scheme that allows you to manage the order of priorities without creating critical situations.

In the moment of venturing outside, Sheltered presents indeed some shade. The system developed by the developers risks becoming quite frustrating when we are tight on supplies, given that the possibility of finding the objects we need is linked to chance. It can therefore happen to find yourself desperate for food to prevent someone from dying, failing in the task and for this reason coming to feel a sense of powerlessness. The part outside the refuge is generally less inspired than the one that takes place inside of, leaving the CPU to handle the exploration until a decision needs to be made in front of a building or a person. The system of combat it is also a bit tricky, and therefore pushes the player to avoid it instead of running the risk of losing an inhabitant of their shelter.

Moving on to the details of the conversion for Nintendo Switch, I was amazed to see that the game does not support touchscreen of the console, thus entrusting the entire control system to buttons and levers of the two Joy-Con. In this way, however, the management turns out to be rather cumbersome, and is not even remotely comparable to the versatility found with the mouse when I was able to play Sheltered on my computer. Having the possibility, it is therefore without a shadow of a doubt the PC version to be taken into consideration to play Sheltered, turning to Nintendo Switch in case you intend to never play it at home, but only and exclusively when you are around. 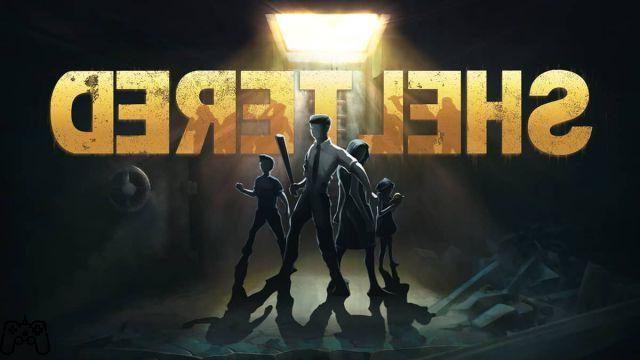 Sheltered can be without a doubt appreciated by those who love the survival genre and wants to experience all aspects of survival within a shelter. Some defect not solved even in the Nintendo Switch version, however, it left me a little bitter in my mouth.

On Nintendo Switch Sheltered looks just as I remembered it on PC. The pixel art graphics are quite accurate especially when we are inside the shelter, where it is possible to appreciate the various details of the objects we can create. The exterior is less inspired, with fairly anonymous places.

No particular peak, neither up nor down. The translation into Italian of all the texts is noteworthy.

On a general level Sheltered presents well-thought-out survival dynamics, which undoubtedly can make the happiness of those who love this genre. The player's main attention must be paid to the psychophysical state of the family members, to avoid excessive randomness in finding the materials you need. The crafting system is also excellent, thanks to which we can make the refuge a small palace equipped with everyone in comfort. The control system on Nintendo Switch is rather inconvenient, compared to that of the PC version.

Did you like the article? Share it!
Audio Video Sheltered: the review
Can you catch a bright Plusle in Pokémon Go? ❯