Those who grew up with 8 and 16-bit console platformers will probably have tried to imagine their own version of Mario and Sonic, perhaps drawing level maps on the blank pages of a school diary, distracting themselves during a lesson. Christian Whitehead was certainly one of these guys, however he has shown that he can do much more than fantasize, creating amateur projects that denoted a quality close to that of the originals. Sega then hired him as supervisor of Sonic Mania, the new two-dimensional chapter dedicated to the famous blue hedgehog.

The beginning of Sonic Mania is a business card that reassures about the competence of its authors, who cite the introduction of Sonic 3 by introducing the antagonists of this episode. From here we start with the adventure through areas already known and partially remodeled for the occasion (such as Green Hill or the Chemical Plant) and others invented from scratch with excellent results (such as Press Garden or Mirage Saloon). In particular, the levels surprise not so much for the graphics quality, which is based on the improved 16-bit era graphics engine, as for the extreme care lavished on level design. Well specify, for those who have not played the classics of the Mega Drive, that Sonic is a title where the speed of movement of the protagonist plays an important component, it is true, but limiting yourself to squirting in a straight line and that's it means losing a good 70% of what a level has to offer.
Running is important to overcome inertia and launch through a loop of the loop, or to enter a tunnel that can amplify the momentum to push right up to elevated platforms. On closer inspection, however, there is always a passage above or below the center line, which often hides secrets such as bonuses or special levels.
In fact, walking in the 16-bit Sonic was anything but horizontal or linear and it was sometimes necessary to move up and down, left and right, seemingly coming back, perhaps to hunt for secrets and bonus pictures. or simply to take a new route that led to the exit. The result created decidedly rich and complex areas, which had to be explored far and wide several times and with a less hasty approach than previously thought.

This approach was maintained, creating a level design with similar complexity, although it was by no means easy. In this, Whitehead's team understood what the substance was made of that made the chapters signed by Yuji Naka into masterpieces and managed to re-propose it by putting some of him into it.

Sonic Mania represents almost the sum of what has been seen in the two-dimensional generation (whose spearhead is represented by the little known, but exceptional, Sonic CD), but it also leaves room for some new ideas that are well blended. We talk about special interactions with platforms, switches, trampolines, or small interlude sections, nothing revolutionary but enough to indicate that the developers have put theirs into it.
Creativity, on the other hand, finds more outlet in the battles with the bosses, which deserve a separate mention. At this juncture we see more how the authors sought the originality of the clashes, sometimes based on the simple use of timing, sometimes on a more creative interaction. To give an example: Robotnik at the end of the Flying Battery Zone cannot be damaged with normal attacks; to win Sonic must use traps in his favor. At the release of Studiopolis, on the other hand, the challenge becomes a real game of Puyo Puyo (Sega's historic puzzle-game, recently re-released on Playstation 4, PC and Switch in a cross-over with Tetris), which can also be unlocked as a greedy extra if you collect all the emblems in one of the bonus boxes.

Of these there are two versions: one in which you have to chase a robot in a running race to recover the emeralds of chaos (useful to access a level in the role of Super Sonic), and the other borrowed from Sonic 3, where the aim is to collect blue spheres in a confined environment, being careful not to hit the red ones that cause ejection.
Longevity manages to entertain for a good amount of time. Not only are the twelve paintings to be overcome a decidedly substantial number (each divided in turn into two acts), but the aforementioned level-design offers further ideas to restart the adventure from the beginning in search of secrets and unpublished passages. It is also possible to face the campaign both in the role of Sonic and in those of Tails and Knuckles, who have different powers, changing the rhythms and ways in which you can proceed with the exploration. The ability of the Pomeranian to fly for short periods or to climb the walls of the echidna greatly varies the player's approach, creating sufficient inspiration to pick up the pad again. As if that were not enough, there are also Time Attack and a versus mode (the latter, however, is probably the least convincing and fitting of the package).

Currently only available in digital format for Playstation 4, Switch, Xbox One and PC. A disk / cartridge version is coming for summer 2018. 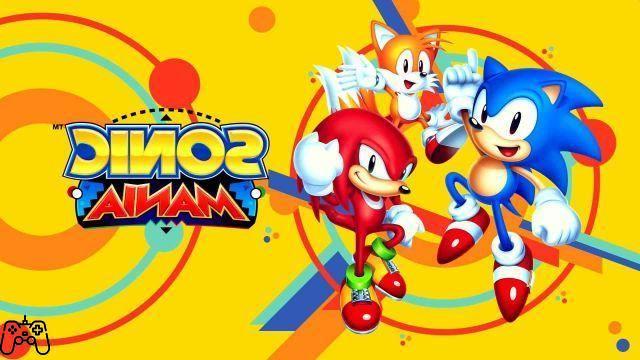 The graphics engine is an enriched version of the one used on 16-bit systems. Lovers of pixel graphics will therefore find a decidedly refined and full of details set, with numerous levels pleasing to the eye.

The music is also very similar to that used in the two-dimensional episodes. The soundtrack is elaborated with that hint of retrogaming style desired by the nature of the title.

Whitehead comes very close to the results achieved by Yuji Naka, demonstrating that he understood, like the original developers, what were the ingredients that made Sonic a great platformer. Replayability is ensured thanks to a very articulated level design, as well as to the presence of different characters, each quite different to play than the other.