Yes, Your Grace: the hard life of king

In times when the word corona is automatically associated with the virus that is keeping us all confined to our homes, the review of Yes, Your Grace it takes us a bit back in the days, to when the only crowns we knew were beer and those found on the head of a king or queen.

The latter are the protagonists of Yes, Your Grace, within which we are called to defend our kingdom from invading enemies, accompanied by other far more subtle and unknown threats. There is no shortage of fantastic elements, which together contribute to the dynamics developed by the guys from Brave At Night to make Yes, Your Grace a very interesting title, especially if you loved Papers, Please and all the genre generated by it.

Beyond the clear inspiration drawn from the effort of Lucas Pope, Yes, Your Grace still manages to build its own identity thanks to a mix between the genre management and that strategic successful but not entirely free from defects, going to wink at the world of graphic adventures and that of role-playing games. If with this brief introduction I managed to tickle your curiosity, all you have to do is keep reading!

As in the best of fairy tales, we should start with the classic "once upon a time". The setting of Yes, Your Grace is the fantastic realm of Davern, ruled by the king who lives inside the castle of Grevno. In addition to a wife, the king we impersonate also cohabits with three daughters, the eldest of which is now of marriageable age while the youngest is still a child.

Once a week the throne room is filled with people willing to ask for the help of the king for some kind of problem, thus carrying on what at least initially is presented to us as a situation of normal administration between theft of chickens and other matters. of simple routine. Soon, however, this situation becomes complicated, when we learn that an enemy is moving in large forces to invade the kingdom to head straight for the castle, intending to claim what the same king promised him some time ago.

A successful mix between management and strategic

Without going into too much detail so as not to spoil the taste of playing Yes, Your Grace, I can tell you that there plot of the game manages to intertwine the internal events of the royal family quite well with the fate of the kingdom of Grevno, presenting a series of choices on which what we see then happening on the screen depends. Once the whole story is complete, there is a general summary dedicated to each protagonist, telling of any end or any new beginning. For this reason, in addition to the six to seven hours necessary to complete the game for the first time we must add at least one more time in which we will be motivated to restart Yes, Your Grace, to go and change the course of events we witnessed the previous time.

From the point of view narrative the effort of Brave At Night therefore works quite well, also thanks to the wise decision to break the adventure into two main parts. Between the first and the second part there are not only different plot elements, but also slightly different dynamics that thus break up what could otherwise be a too boring repetition of the same events. Wanting to nitpick, the game manages to alternate fates to make us become attached to the various members of the royal family, thus losing a little on the empathic level in what are some key passages of the story.

Turning instead to dynamics of Yes, Your Grace, as already mentioned we are faced with a mix of elements drawn mainly from the world of strategic and management, but not only. The pace of progress of the game is based on the passing of the weeks, to find ourselves therefore every seven days having to decide how to manage the resources at our disposal (gold and food), while maintaining a positive level of appreciation from the subjects.

A self-respecting king obviously knows that it is not possible to please everyone, especially in times of war. It is therefore up to us to try to keep everything afloat, at the same time managing the situations that the game puts before us. In the early stages, for example, it will be necessary to contact the lords of the kingdom to obtain their support in the war, thus increasing the number of soldiers that can be deployed.

In the more advanced stages we will have some figures to send around the kingdom, investigating particular facts reported by subjects or to go and recover resources to be used in view of the war.

I played Yes, Your Grace on PC, downloading it from Steam. The game contains some references to adult content such as sex and drug use. 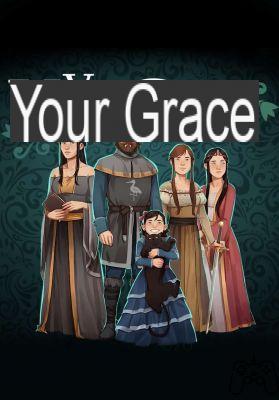 Going to conclude this review, I feel like rewarding Yes, Your Grace and the work done by the Brave At Night team, which I remember is made up of five people. The only gripe remains the one for which one could perhaps have pushed a little more towards the genres from which Yes, Your Grace draws, which still manages to keep the player steady in the chair week after week, encouraging him once the end is seen. to come back at least once to deal with Davern's affairs. Even the price of around 17 euros is definitely commensurate with the overall offer.

More than for the game dynamics, Yes, Your Grace winks at the world of graphic adventures thanks to the style with which it presents itself. The pixel art developed by Brave at Night takes us straight back to the golden age of Monkey Island and company, making itself appreciated for its detail throughout the duration of the game. The representation of the key scenes is also excellent, as is the care of the various areas of the castle among which we find ourselves moving our steps.

Among the nicer aspects of Yes, Your Grace it is undoubtedly possible to mention the soundtrack of the game. All stages of the story are accompanied by the original songs made by the developers, including some songs where in addition to the instruments we also find the voice. As for the dubbing, however, the characters speak but in fact they say nothing of complete meaning: it is obviously a stylistic choice made.

Yes, Your Grace manages to avoid the excessive repetition of the dynamics described in the body of this review, thus keeping the player's interest active. However, in terms of pure gameplay, the game fails to break through as we would have hoped. The mix developed by the English team works, mind you, but the feeling in the end is that it might have been possible to go a little further in some cases, thus giving the game more depth. An example of all this is the reference to graphic adventures, strong as said in the visual aspect but weak in terms of game mechanics. The few puzzles, if we can call them that, can in fact be counted on the fingers of one hand and are easily solved.

Did you like the article? Share it!
Audio Video Yes, Your Grace: the hard life of king
When is the Pokémon GO Buddy Adventure Update released? ❯

add a comment of Yes, Your Grace: the hard life of king