If the dead Cthulhu dreams and waits among the impossible geometries of the sunken city of R'lyeh, Edward Pierce dreams unspeakable nightmares in the fumes of alcohol, with the help of a bottle of whiskey, in his office in Boston, year 1924. A private investigator like many others, deprived even of serenity and sleep, if not ethyl, from the dross with which the First World War intoxicates his veterans, disillusioned and cursed children of the homeland.

Someone knocks on the door, to distract us from one drama and unwittingly throw us into another, while on the radio a refreshing and roaring jazz seems to tell us that everything will be fine, knowing full well that it is just a mere illusion. A father asks for justice for the death of his daughter and his whole family, Sarah Hawking, who died with her son and husband in the fire of the mansion overlooking the island of Darkwater. Extraordinary painter, she is known for the disconcerting esoteric charge of her paintings, cryptic, terrifying, magnetic.

What can be said about the plot must necessarily be stopped here and then faded along the rest of the writing, because if it is true that Lovecraft should be assimilated in purity to make the most of it, with the fingers touching the paper and the mind free to procedurally generate horrors, letting oneself be gently tortured by the anguish of a genius of fiction, it is equally correct to say that Cyanide and the two screenwriters of the title, Pia-Victoria Jacqmart and Maximilian Lutz, managed to outline a world extremely close to the poetics of the author of Providence. A result achieved only through hybridization with other inspirations, to dilute the astonishing toxicity of the original works, drug of the spirit, and make them usable through such a distant and absolutely expressive medium. The choice to shape the work through purely investigative mechanics was the first step, which refers directly to the atmospheres of classic thriller, of Agatha Christie, leaving the player the possibility of total identification, pushing him to curiosity and the constant search for details, like a Poirot of the unnameable. No open world aims, we go back to closed levels, as if they were pages of a book, wisely constructed and full of clues, most of which are optional, capable, on the one hand, of activating purely personal, meta-playful investigation processes, on the other of triggering unique events, mandatory or not, capable of bringing the story to one of the possible conclusions. Giving in to the caustic seduction of alcohol or staying sober is, for example, one of the dilemmas we will have to constantly deal with, as well as maintaining a more or less aggressive approach towards the characters we meet., all well outlined in the personality and in the script, functional to the events without ever being unforgettable, also thanks to a visual rendering of the same just sufficient. Perhaps also because the bulk of the story lives well beyond individual human beings, small pieces of an unimaginable cosmic mosaic.

Be curious (as I was during my test) will certainly bring us closer to the truth hidden behind Sara's paintings, to the sect that prays blasphemous deities in the depths of the island, to the events that involved the fishing boat Scylla and its "miraculous catch", but it will lead us other yes towards madness, the refusal of the unbearable, in which to drown almost gently without resisting. After each fundamental choice, the title always warns that this will affect our destiny, always leaving the doubt about what would have happened if we had behaved differently, exactly as we would in reality, stimulating us to face a second game, if we wanted to, however giving way to reflect on it even contenting ourselves with our personal epilogue and keeping the doubts as an integral part of the gameplay. And they are.

Each interactive element is then conditioned by statistics divided into a series of ability inspired by the board game of the same name, a role-playing element that changes the cards on the table with its game of percentages and possibilities, where every characteristic, from the investigative flair to the notions of medicine, passing through strength and eloquence, will be reflected in the way of resolving dialogues and analyzing a crime scene, leading to different results or the inability to find a clue, precluding certain questions during an interrogation. It is all very subtle, never invasive, natural. Being able to pick a lock could bring to light a fundamental element as well as failure will leave it in the shadow of the code, everything will still flow towards the estuary of destiny. This creates a splendid atmosphere, detective noir within a dark fantasy painting, which never pushes the gray matter to the limit (Edward will tend to solve the investigations on his own with the clues recovered through our curiosity), allowing himself a handful of classic environmental puzzles and splendid and purely surreal situations (among the most successful ever) to leave room for the assimilation of his mythology, to that meta-game I referred to earlier, that virtuous circle that the written works stimulate on a neuronal level, starting to think by hypothesis together with our alter ego.

I searched for the truth about the blasphemous deity all over the island of Darkwater, on Xbox One, thanks to a code kindly provided by the Cthulhu cultists via Focus Home Interactive, arriving at the ending which, in the end, turned out to be just what I was hoping for. also planning a trip to R'lyeh for next summer. 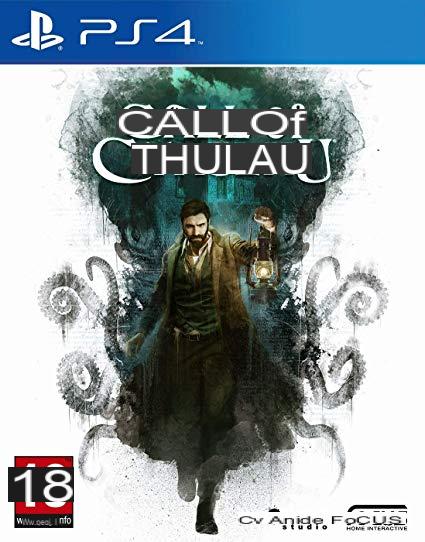 This is the beauty of Call of Cthulhu, the true litmus test in the skilful use of Lovecraftian material. Because then, when the rhythm picks up, the work shows all its structural cracks, throwing us back into the last generation that the technical side whispered already from the first seconds of the game. We therefore return to the fashion of stealth at all costs, poorly implemented, dirty, mechanical, up to a particular FPS-like section that makes the skin crawl for lack of weight, as if it had been glued to the original structure with a few coats of vinyl glue. What annoys you, once you have seen the credits, is not so much the quantity of them (short, few, and scattered along the second half of the story), as the anxiety of seeing them repeated to break the rhythm of a particularly fascinating section . An almost traumatizing, Pavlovian effect on gameplay that felt blissfully slow, gently sloping towards a totally psychological horror, without repeating the mistake of that unfinished Deadly Premonition masterpiece. They are stale clips that distract from thought, from elucubration as an end in itself, fortunately not being able to ruin the general experience, which to tell the truth returns to shine, at the level of tension, with two particular stages blatantly terrifying, horrible, capable of petrifying with the blasphemous aesthetics of unclean creatures and a masterful sound design, which force the heart to pump blood with fibrillating frequencies.

But fear, in Call of Cthulhu, it is above all a question of awe, feelings, thoughts. The rotting and crumbling aesthetic of Darkwater, a fishermen's island that has fallen from grace due to a death of fish that resembles an endless curse, the acid green lighting of its whale oil lamps, or who knows what other animal, the details of the Hawkins mansion, its esoteric and supernatural references, family memories, private rooms that have now become still life backgrounds, the rotten corridors of a psychiatric hospital, that oppression that weakens body and spirit making it degenerate into a tormented hallucinatory state. An aesthetic that lives above all on details, references to that alien and filthy art that we could only imagine through the words of the writer, ritual objects, statues, jewels, all recreated (indeed, created from scratch) to wink in a polite way at those who love his mythology and are almost obsessed. It matters little if everything is filtered through a technical depth from the past generation, the message always arrives loud and clear; like when inside a nightmare the oil of our lamp is running out (the refills are scattered around the levels) and the breathing becomes labored, the environment is eaten by the dark and we find ourselves running to find the way back among filthy and obscene echoes. It also happens that we have to hide in cramped closets, gripped by the neck in a climbing claustrophobia, while the view becomes blurred and we see our pursuer pass through the cracks, simulating a panic attack capable of breaking your breath. It is in these moments that the memories of the avid readings come out forcefully, their most distressing charge, adapted to a perhaps more modern story, more suited to the medium if we will.

The work Cyanide will certainly be appreciated by the cultists of the American author, if they are able to grasp the most modern nuances of what is ultimately a new story that fits into the general framework of his Myth. It is useless to be fundamentalists, at a certain point, and its wonderful atmosphere is partly ruined only by questionable design choices, brilliant when it remains on an investigative / narrative level, fallacious as soon as the rhythms rise and you rely on now old mechanics. A good first step for a title that deserves to be the first of a series, especially for the narrative coherence it has shown, an opportunity to see Lovecraft's fantasies revived and add new interactive material to one of the most important works of modern literature.

Where the polygonal bulk does not reach the attention to detail, which continually whisper, obsessively, new interpretations and conjectures on the crazy mystery that surrounds Darkwater, Edward Pierce and Sara Hawkins. The visual rendering refers to an infragenerational title, some bugs and polygonal models of the characters just enough make the suspension of disbelief waver, but some stylistic choices, the design of hallucinations and the constant crescendo of surreal moments have such a personality to support and cover (almost) all the technical deficiencies. Double agent.

If the dubbing can be heard pleasantly without excelling, the sound, musical but above all environmental accompaniment is capable of covering the player under a constant layer of anxiety. From the echoes of hell to the laments of the mentally ill, passing through the prayers of the cultists of Cthulhu, each setting has its own sounds, little alarm bells or bewitching occult calls. Immersive.

A title that plays with the player's curiosity, providing him with detailed environments in which it is pleasant to walk, looking for a hidden clue capable of activating a metaludic process that fully involves the player. Thinking and brooding on the mystery in one's head thus becomes more important than solving it through gameplay, between environmental puzzles and multiple choice dialogues with the most varied consequences. Every important action will pinch the rope of our destiny, leading us to one of the possible endings, unfortunately passing through stealth sections to be eliminated or rethought and a section that anticipates the absolutely false epilogue. Style falls in favor of the market perhaps, which do not decisively affect the good and engaging things that revolve around it. Cerebral.