The three-dimensional fighting games in the beginning stood out not only for their graphics, which aimed at a realism far from the comic style of their two-dimensional counterparts, but also for a more realistic representation of the fight. Virtua Fighter, Tekken, and Dead or Alive emerged around that time. While the former was the one that came closest to being a martial arts simulator, the latter soon took a turn, introducing imaginative aspects such as bears, kangaroos, demons, robots to the detriment of the setting. Dead or Alive instead he placed himself as a middle ground, allowing himself some brackets of surreal lightness, but without neglecting a certain care in the staging of fighting styles.

Dead or Alive 6 at the moment it is a game that is proposed on a shared market with Tekken 7 and Soul Calibur 6, focusing a lot on an aspect quite neglected by the two competitors, that is a system that is not only accessible for beginners, but also easy to use. introduce the mechanics in a clearer and more immediate way. The Bandai Namco titles are in fact of excellent quality, but they lack a tutorial expressly designed to make things easier for the casual user.
Team Ninja in this chapter therefore wanted to offer ways to show the best of its gameplay, placing them in a virtuous circuit in which to learn, play and have fun.

DoA Quest in fact it is the expression of this principle, a single player section where you can face more than one hundred meetings, each with three specific objectives to satisfy. Some of these are based on simple victory, while others require the execution of particular moves in order to master every single mechanic or the peculiarities of each fighter. If the meeting ends without having carried out one of these tasks, an item will appear to highlight the missing requirement, asking the user if he wants to quickly move on to the lesson of the tutorial that explains how to fulfill that particular task. If you complete all three items for each mission, you get points with which to unlock new costumes and accessories, thus completing the virtuous circuit above, designed to entertain, but in a didactic way to learn all aspects of the game.

The same new mechanics have also been inserted with a certain criterion, making sure that these simplify things for beginners, but at the same time proving to be preparatory to understanding the most useful aspects of the gameplay of Dead or Alive. In fact, many recent fighting games have often resorted to systems such as autocombo, which, however, served little or nothing to understand the functions of the title and instead became a trivial expedient that resulted in spam.
The developers, on the other hand, studied the Devastating Grip so that it was a simplified version of the counter moves (which has always been a central and characterizing element of DoA clashes), but useful for understanding the basic principles of their more advanced version.

The counterattack system is always based on a kind of back and forth, where each hit is neutralized by a counter move performed to stop a kick or punch thrown up, down or in the middle. However, this method requires you to perform the maneuver knowing the direction of the shot you want to stop, so blocking a high shot with a medium counter move will be ineffective. The Devastating Grip, on the other hand, is satisfied with a simple generic activation, being valid for escaping any attack and without being excessively strong, as it does not damage the enemy too much and costs a notch of special energy (thus limiting the number of times to use it. during a meeting). However, the basic principle in common with advanced counters is always timing, so running it at the right time will be essential (penalty, fail and be discovered), creating a starting point with which to practice, and then move on to using the advanced and much more lethal version.
For this reason, therefore, its insertion is not far-fetched and the whole offers elaborate alternatives that reward experts, but at the same time guaranteeing a “light” version accessible to all.
The other new technique is similarly shaped as well: the Devastating Blow it is similar to Tekken's Rage Art, which is an easy to execute super move, useful as a comeback tool for those at a disadvantage. The difference, however, is that it can be canceled after the first hit, leaving the opponent stunned and at the mercy of a more complex and powerful combo. This also guarantees a double track: beginners will be able to settle for basic execution, inflicting medium damage, while the best will be able to extend it and make the most of it..
Overall, playing Dead or Alive is smooth and fast like a Tekken, but without neglecting a playful depth that can give great games even to experienced players.

The overall offer is quite good in terms of the number of modes, there are a Story, Time Attack, Survival and Arcade, in addition to the aforementioned Doa Quest. Therefore, even those who do not want to throw themselves into playing against other human players, can still get a good number of hours of fun even just by facing the CPU.
The structure of the campaign is quite anomalous, as the story is presented through micro episodes, similar to small scenes from a show, which intersect with each other like the parallel events of the protagonists of a television series.
The main plot will in fact open in other chapters of the sub-sections, in which you can follow the plots of the supporting actors, completing which other boxes will open, creating a non-linear narrative for each character, similar to that of a television series. . The online sector, however, suffers from the lack of creating private rooms, a feature that will be introduced later this month via a patch, leaving only matchmaking as the current option to play online.
Graphically, the engine used produces a tangible improvement over the previous episode, but only on certain aspects. The polygonal models of the characters denote a moderate qualitative leap compared to the last generation of consoles. The whole is still of good quality, but perhaps a greater effort would have been appreciable. The real breakthrough lies in the lighting effects and lights, which help a lot to enhance the details. The sweat, the dust, the bruises of the blows, the broken accessories and the disheveled hair, all these signs are tangible on the fighters, giving the best idea of ​​the fight that lasts.. From this point the work done by Team Ninja is commendable, creating a match between the progress of the meeting and the appearance of the characters.

The arenas, on the other hand, are less effective, which are aesthetically too similar to those of the previous chapters (such as Mila's gym, the casino, the war zone or the laboratory). However, the area transitions have been preserved, so by delivering particularly strong blows to the edges, the opponent is thrown out, falling into another area where the action moves in real time, creating very dynamic and spectacular sequences.
The squad of wrestlers is also affected by an ambivalent effort, resulting well assembled, but perhaps stingy in novelty. In fact, only two new faces could be few for the most assiduous players of the series. The others, on the other hand, can appreciate its composition due to the good variety of fighting styles and the presence of the most important symbol fighters (perhaps missing just a couple of names, but in function of a minimum rotation that is normal between various chapters).

Dead or Alive 6 is a three-dimensional match fighting game. Its playability is immediate and smooth like a Tekken, but in addition it offers a tutorial system well integrated in the offline modes, allowing novice players to have fun and learn the mechanics at the same time. The number of single player modes is quite substantial and guarantees a good number of alternatives for those who do not want to dedicate themselves too much to the challenges against other players. 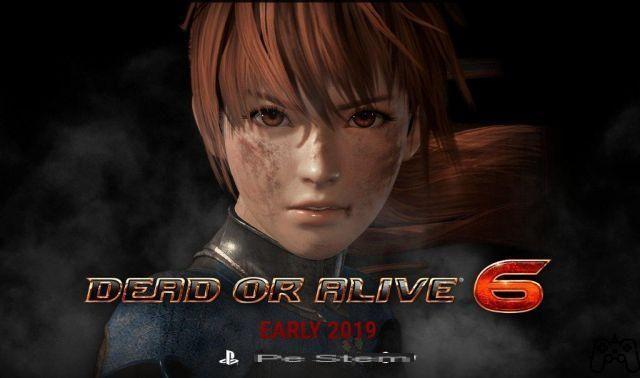 The graphics of Dead or Alive 6 are pleasant overall, although a greater effort would have been appreciated to present more elaborate polygonal models and new arenas, compared to the previous chapters. The lighting effects and the marks of the blows instead give great vitality to the characters, making the effects of the clash tangible with a certain spectacularity.

The music is quite varied and all suitable for the type of game to which they are the background. No trace perhaps denotes a great compositional virtuosity, but the ensemble still works well.

The gameplay of Dead or Alive 6 is very complete and solid. It has several technical aspects without sacrificing immediacy. The new mechanics are useful for learning the basic principles in a preparatory way to the deeper and more interesting aspects that the title has to offer.

Did you like the article? Share it!
Audio Video Dead or Alive 6
How do Team Rocket Balloons work in Pokémon Go? ❯