Years before Squaresoft became a reference point for all JRPG lovers, and even before his own Final Fantasy VII revolutionized later the concept of "role-playing game" itself, making it widespread even among those players who did not even know up to that moment what terms such as "Skill Point" or "HP Level" were, the Dragon Quest series (known outside Japan how Dragon warrior), began his journey within that genre of which he would in turn be a source of inspiration.

It was in fact back in 1986 when Enix released a role-playing game born from the screenwriter's mind on the market Yuji Hori, who was inspired by games like Wizardry e Ultima, from the artist's imagination Akira Toriyama and from that of the composer Koichi Sugiyama. A first episode that would have given life to one of the most important sagas in the history of videogames, today made up of several spin-offs and eleven regular chapters, the last of which, Dragon Quest XI: Echoes of a Lost Era, in fact, he is the protagonist of our review.

Dragon Quest XI: Echoes of a Lost Era arrives in Italy a year after the original release. This is because Square Enix has decided to make some significant changes to the structure of the game with the specific aim of making it more attractive to the Western market. Nothing striking, however: we are talking about the addition of voci in English, of a modality extreme mission which offers additional challenges for more experienced players, of a new one function to run, menu and user interface more intuitive, and a photo mode that allows players to photograph in detail the landscapes, characters and monsters in the game.

Going into detail, however, the title tells of a young man who grew up in the quiet village of Roccapietra who after participating in the ceremony of transition to adulthood in his village, discovers an incredible truth: in fact he is the reincarnation of the legendary "Lucente", a hero who saved the world in past ages, and is destined to do great things ... But after revealing his true identity, the hero is branded as "Son of the Shadow" and the army begins to hunt him down. On his escape, he gathers a group of brave adventurers, including the healer Serena, the blue-haired thief Erik and the mysterious old Rab. They truly believe in the reincarnation of the Shining One and with him set off on a journey that will take them across continents and oceans, where they will discover a terrible threat looming over the world.

Dragon Quest XI presents the classic structure of many JRPGs, with an unoriginal but fun plot to follow and not without twists, various locations to explore, characters who follow their daily routine with which to interact to gather information or assignments, shops to visit to buy everything you need for missions, and monsters that behave differently depending on the environment in which they are, to be taken down to make their way through the adventure and collect experience points.

The growth of each character is managed directly by the user through the Skill Grid, above which you can use the skill points obtained in battle to "teach" new spells and techniques to the heroes, and improve their characteristics. Others can then be unlocked by “moving” on the chessboard panels: when one is activated, the surrounding ones become available in turn, expanding the options.

All this allows you to deploy on the battlefield four characters at a time equipped to face hordes of colorful monsters and with a rather funny nature, to tell the truth. in fights characterized by the canonical turn-based structure. The opponents are visible on the screen, so it is possible to avoid them or attack them first to start the fight with a small advantage when the party is “carried” into the classic battle screen.
The combat system is simple and intuitive, with the classic physical and magical attacks and the unique abilities of each character to be skilfully alternated to exploit them properly based on the characteristics and weaknesses of the enemies. Each type of attack, as well as spells or other special moves, varies according to the character, the weapon and its level.

However, there is a nice novelty constituted by the so-called Perky Powers, a typology of special attacks that a character can perform alone or cooperatively with other team members who in turn are in the same status. The condition for using these powers is that the party member has suffered a certain amount of damage first. The Perky state lasts several turns and can be maintained even after the end of a fight, ready to be used in a later fight.

The general difficulty level is not very high, and in any case there are a number of elements that facilitate the gamer's task. From this point of view, for example, it can be exploited one of the camps that are scattered throughout the map which serve as a refreshment area for the party. In fact, the area is not attackable by enemies, it allows you to save the game, recharge your health and mana and forge particular and rare objects through a nice minigame, provided of course you have the relative alchemical formula.

Finding weapons, objects, rare materials and hidden formulas to improve your equipment thus becomes the spring that pushes the gamer to wander around the world.

The exploratory element is in fact a fundamental component of the game, just as great importance is given to the interaction with the elements that "populate" the various towns or the various clubs. an immense and wonderful world that combines a cel-shaded style to photorealistic details. In these environments you can in fact talk with the inhabitants to collect useful information or unlock side-quests (another reason that can push you to venture into the world), but also interact with different objects such as barrels, vases, bookcases, wells and bags, in the which very often are hidden precious surprises. Parallel to the adventure, Dragon Quest XI also presents everything a series of minigames designed to vary the gameplay and to allow purists of the genre to fully enjoy the game, discovering everything that can be discovered.

As for the technical sector, Dragon Quest XI is a real feast for the eyes thanks to the choice of colors and the three-dimensional modeling of characters, scenarios and creatures. Busy cities, picturesque villages, lush forests, castles and gloomy dungeons to explore, all designed with care and represented with a truly remarkable image cleaning. The sound part is a little more disappointing, not so much in the effects but rather in the fact that the beautiful soundtrack edited by the usual Koichi Sugiyama, is made up of simple midi and not orchestral or sung pieces.

I played Dragon Quest XI: Echoes of a Lost Age on PlayStation 4 for approximately 58 hours, completing it without finishing all the optional side missions. 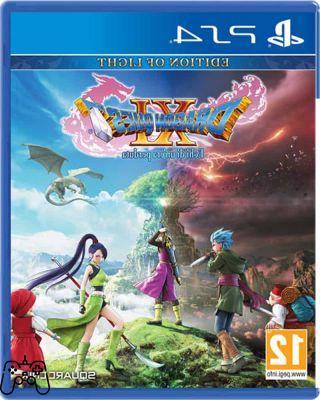 Lightweight, but also fun, long-lived and deeper than it may seem at first glance, Dragon Quest XI: Echoes of a Lost Age is an old-fashioned Japanese RPG that seems to have been designed specifically to make genre fans happy. . In a historical moment in which we often witness continuous technical upheavals in many historical sagas, it is nice to find that feeling, that atmosphere and that playability, albeit simplified in some points, of the classics of the past. In short, a complete title from all points of view, capable of thrilling and entertaining anyone who seriously loves role-playing games.

The graphic sector is excellent, with a well-chosen character design and the unmistakable style of Maestro Toriyama to embellish every character, scenario or creature. Good variety of locations, with cities, villages, lush forests, castles, snowy areas and gloomy dungeons, represented with beautiful colors and with a truly remarkable image cleanliness.

The dubbing in English is discreet, the soundtrack is beautiful but it is composed of midi, which makes it lose some quality.

Did you like the article? Share it!
Audio Video Dragon Quest XI: Echoes of a Lost Age
All the tasks and rewards of Spectacular Psychic Field Research in Pokémon Go ❯

add a comment of Dragon Quest XI: Echoes of a Lost Age