Everyone in the ring with the WWE 2K19 review!

The WWE sport show returns again this year in its videogame incarnation par excellence, namely that of Yuke's and Visual Concepts. WWE 2K19 in fact, the tradition of the popular franchise continues, proposing itself as an edition rich in content, with an impressive roster and a discreet and significant rewrite of some game modes, but with a playability that alternates highs and lows, and that it is confirmed to be largely identical to that of the previous edition.

Yet the developers have done everything to improve a gameplay often accused of being too static and woody. Starting with the animations of the characters and some useful tricks to speed up the action a little. But these are small refinements that only significantly improve the experience: the core mechanics remain unchanged, and everything is based on numerically limited reversals, on holds and on well-aimed hits, the execution of which leaves as always little room for luck or the simple hammering of the keys.

The only significant innovations are therefore to be found in the return of the minigames linked to submissions, which reward the timing and skill of both those who attack and those who try to defend themselves, and in the so-called payback, abilities that are recharged during the encounter and that give temporary upgrades.
Each of these talents has unique characteristics, there is one that for example increases strength or one that allows you to quickly recover health, and it is therefore up to the player to select the most suitable for the match and for his athlete.

Personally I found these introductions enjoyable, even if they don't upset the gameplay: from this point of view the developers have to work harder, because unfortunately there is still some historical defect in the execution of some moves, in the fluctuating artificial intelligence of the characters, as well as in the detection of collisions.
It is true that titles like this one they do not set out to be dynamic style fighting games, but to capture and to best reproduce the spirit of the show, and in this sense the game succeeds perfectly, but after so many years it could finally be renewed on this front as well.

To allow the player to show their skills in the ring, WWE 2K19 proposes a wide range of game modes, each of which is full of options. Describing them in detail one by one would be a titanic undertaking, so I will try to do so by highlighting the salient points and news when present. In addition to the quick match modes with the various single or multiplayer sessions and the respective variants such as Royal Rumble, Hell in a Cell, Fatal 4-Way, Steel Cage and Elimination Chamber, we have the usual Community Creations and the Road To Glory, which this year gives you the chance to join one of eight factions.

Totally new is the Towers mode, which seems to mimic the homonymous present in the recent Mortal Kombat. Inside, in fact, there are a series of towers where you can face matches in succession of varying difficulty, with different themed opponents and rules. Then there are the Towers where the playing conditions are dynamic and come updated periodically and automatically via the internet connection with new daily, weekly and monthly competitions.

Mode returns  , this time focused on Daniel Bryan, a wrestler beloved by the public whose career highlights through eleven matches, each time trying to fulfill specific objectives that simulate the progress of real matches. It is a very accurate story-driven mode in terms of aesthetics and direction.

Among the classic and most loved by the public, confirmed the Career, however, redesigned almost from scratch to offer again a more complete and engaging story mode, both in terms of narrative and playability. As always, we start by creating a superstar through a powerful editor with which to customize even the moves and finishers, and proceed, step by step, in an attempt to make it grow and take it to the top of the WWE, this year starting from the indie scene.

The athlete's style can be personalized by assigning it to a specific category of fighters among the five available, ranging from so-called "technicians", athletes that are strong in the application of various techniques such as submissions or suplex, to "cruisers", experts in aerial skills and reckless maneuvers, and so on. Furthermore, by obtaining credits, Character characteristics can be enhanced through three talent trees and a simple progression system.

WWE Universe, finally, sees the gamer called to play a practically infinite season playing a real champion or one created from scratch, is very rich in content and has been updated with new stories, fully voiced scenes from real wrestlers and game situations. Everything is manageable through a special menu where the various options are visible, the statistics, which matches are scheduled for the evening or in the next few days, the rankings of the federations, the news from the backstage with the related cases that arise and many other functions.

But basically everything WWE 2K19 looks like a show, and playing it is tantamount to attending a WWE TV show. This is also due to a respectable technological sector, which does not show great differences compared to what was seen in the 2018 edition, but which still manages to do well. Positive changes, albeit sensitive, can be found in the direction, increasingly identical to that of television productions, in the surrounding elements and in the aesthetics of the wrestlers, whose physical features more or less faithfully follow those of their respective real counterparts.

The glance during the entrance of the contenders or when they fight in the ring, each with its own choreography and moves, is splendid.

WWE 2K19 offers a respectable roster, and between Superstars, Divas and Legends from Raw, Smackdown, 205 Live e NXT, we find among other athletes of the caliber of John Cena, AJ Styles, Roman Reigns, Undertaker,  Bobby Lashley, Lacey Evans, Triple H, Ronda Rousey e Mickie James. There is also no shortage of some of the greats in wrestling history such as Kevin Nash, Booker T e Ric Flair.

To this plethora of fighters that already in themselves guarantee the product many variants and a great longevity, since there are also several versions of many, add those that are or will be made available through DLC, which should bring the number of athletes to about two-hundred. Not to mention those that can be recreated from scratch using the game's powerful internal editor.

All good then? No: despite the implementation of new animations, the characters sometimes appear lack of fillet animations between one movement and the next, there is still some phenomenon of interpenetration and there are some now “historical” graphic glitches.
In any case, those like me and many fans were used to similar but more invasive situations in the past, can at least breathe a sigh of relief and tolerate, proportionally, some small flaws, with the hope that these will then disappear completely in the future. , or via update, or at the latest next year.

For the rest, it goes much better with I share Audio, thanks to the original samples from the arenas, the commentary from the commentators from the ringside and the soundtrack, whose songs sung by artists such as Eminem, Post Malone, Metallica and Fall Out Boy, just to name a few, were handpicked by the wrestlers themselves.

I played WWE 2K19 on PlayStation 4 in various matches and modes in single and multiplayer, including online. We have not been able to test the latter as it deserves due to substantially quite empty servers. In any case, in the few meetings that we have managed to do, we have not had any problems, apart from some problems of lag every now and then. 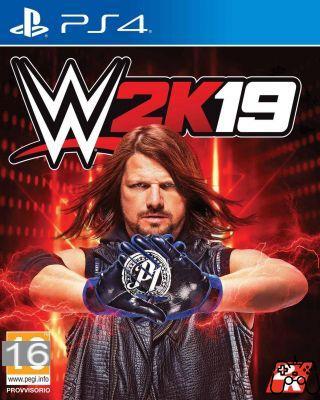 WWE 2K19 is probably one of the best games in the series in terms of offering, less in playful terms given that from this point of view it offers no sensational news. On the one hand, it is in fact rich in contents and athletes, with the return of a much loved mode, that is Showcase, the introduction of the interesting Towers and a redesigned Career to offer a narrative system capable of keeping company for hours. On the other hand, it offers significantly improved gameplay, but still woody and anchored in the past. In short, WWE 2K19 is a title that for the type of offer it is capable of give fans back all the spirit of wrestling shows American, and therefore for this deserving of a positive judgment despite a playability that it would still need some updating. In this sense, those who are not fans or are not willing to tolerate certain mechanics can take away half a point from the final vote.

The graphic sector is excellent, significantly improved compared to last year, with great attention to detail, to the characters and to the whole outline linked to the various WWE shows. There are some glitches.

Virtually infinite longevity thanks to the many modes present and the powerful character editor. Controls improved but still unresponsive at certain times. The return of Showcase, the introduction of the Towers and the Career mode with a well-structured story represent the best of a production that returns the usual feeling of the TV show. Woody combat system that can be improved, especially in the artificial intelligence of the characters and in the detection of collisions.

Did you like the article? Share it!
Audio Video Everyone in the ring with the WWE 2K19 review!
How to play Minecraft Java with a controller on the PC guide ❯

add a comment of Everyone in the ring with the WWE 2K19 review!