Horizon: Zero Dawn is the new adventure developed by Guerrilla Games, as well as one of the most illustrious exclusives of Playstation 4. This new triple A intellectual property is grafted onto a videogame landscape accustomed to the great sagas that last for many chapters, often keeping the skeleton of game. This premise, in itself, would be more than enough reason to celebrate Horizon's arrival on the market. However, following the adventures of the indomitable Aloy is an inherently fulfilling experience that gives gamers so many reasons to rejoice. In fact, despite some aspects betraying sins of inexperience on the part of the developers, Horizon is an engaging game, graphically amazing, artistically original and with a complex and, in the long run, satisfying combat system.

Having to classify it in a videogame genre, it could be defined an open-world adventure set in a post-post-apocalyptic world. Right from the start, although it has a vast and wonderful setting, the game tends to favor action and combat over the RPG elements that have characterized other recent open-world productions, such as The Witcher 3, for example. The probable explanation of this lies in the fact that, until now, Guerrilla's best known game was the first person shooter Killzone.

The game world is, as mentioned, wonderful and has artistic inconsistencies that are of great impact for the player.The tribal system, in which what remains of human civilization is organized, is characterized with prehistoric features: hunting is the main survival activity, men live in makeshift huts and warm themselves thanks to bonfires. The larger cities, such as Meridia, have a more medieval aesthetic, as if to recall Novigrad or any of the cities of Skyrim. Finally, in the midst of almost uncontaminated nature, there are machines: a legacy of an earlier civilization, they seem mysteriously programmed to attack men, making moving from one settlement to another very dangerous. There are all kinds of them, and each of them has a certain set of strengths and weaknesses. This intrinsic artistic value is amplified by an exceptional graphics engine, the Decima Engine, developed by Guerrilla specifically for Horizon.: to guarantee his goodness it would be enough to say that Hideo Kojima chose him for his Death Stranding! The graphic rendering of the night-day cycle, of the light and weather effects is unparalleled among today's graphics engines, especially on a PS4 Pro. A smudge, quite annoying to be honest, however, is represented by the poor quality of the facial expressions of the characters during the animations: they are certainly not as disastrous as, alas, in the case of Mass Effect Andromeda, however they are the only aspect that can be improved in an otherwise superb graphics sector.

We play as Aloy, a young woman whose condition, since she was a child, is that of marginalized or removed from her tribe of origin, the Nora. Our heroine is raised by Rost, also an outcast, who teaches her, with paternal affection, the art of hunting, survival and combat. Aloy, however, wants to know the fate of her parents as well as the reasons for her marginalization of her: it will be up to the player to guide her in this initially personal enterprise and which, subsequently, will reserve some twists.

The combat system is very original and, although it may initially be difficult, in the long run it reveals itself as one of the best assets of the game.Head-on collision with machines is rarely the best solution: a tactical approach, on the other hand, allows Aloy to make surprise attacks, place traps on the battlefield and gain vital advantages for the outcome of the battle. Hand-to-hand combat is limited to the use of the spear and does not include the possibility of using the lock to lock the target on enemies. This choice, undoubtedly original when compared to other contemporary games, adds a bit of confusion to the clashes. In fact, the camera movements do not allow you to have the view behind Aloy at the exact moment in which he unleashes an attack and, therefore, some shots are given a little blindly and are automatically redirected. Another original feature of the game is that the primary weapon is the bow, therefore a good portion of the fights can be solved from a distance and has a high rate of showmanship and dynamism.

Another tactical stratagem available in battle is to perform an "override" on the machines thanks to which Aloy can literally ride them during the fight. Often, however, circumstances call for a "silent" approach: the stealth movement mode is well crafted and is sometimes reminiscent of Far Cry, especially in assaults on bandit forts, sometimes Uncharted 4, for how tall grass can be exploited as a cover. The latter also comes to mind when Aloy climbs rock faces and performs prodigious jumps worthy of Nathan Drake. In general, the young Nora moves very well: the control system is reactive and allows her, for example, to jump over medium-low obstacles simply by holding down the directional lever, or to operate slides while running, using the square button, which allow the immediate transition to stealth mode.

Among the many positive notes, there is basically one criticism that can be addressed to Horizon: that of having an open-world that, although full of things to do, objects to collect and very varied places to explore, is a bit empty of stories. secondary and narrative points of interest.In other words, Horizon presents radically different ideas compared, for example, to the concept of open-world a la Bethesda, or that of the Fallout and The Elder Scrolls series, where at all times there was the feeling that even in the remotest of ravines you hiding the start of a new quest or at least a character to interact with. Often the towns and villages of Horizon, while beautiful to look at, are full of unexplored houses and NPCs you can't interact with. As we said before, the RPG elements are not primary in this game, however when you create such a vast game world then it automatically imposes the need to fill it with life and interaction. From this point of view Horizon is not on the level of the aforementioned TES and Fallout, nor even of The Witcher 3: in order to acquire the status of a masterpiece, in my opinion, Guerrilla will have to improve in this sense in the sequels.

Finally, some minor notes can be made regarding the level design, which in some situations (for example the bandits fields) limits the player's freedom of movement, and the looting system, which is slightly cumbersome. Inventory management, especially at the beginning, is just as cumbersome, however crafting is satisfying thanks to the variety of objects that can be made and their usefulness in battle.

I played Horizon: Zero Dawn with digital copy purchased on the Playstation Store. I completed the main adventure in about 30 hours. The game was completed with a PS4 Pro connected to a Samsung 40MU6120. Excellent audiovisual rendering. The game was in the Italian version: good dubbing. 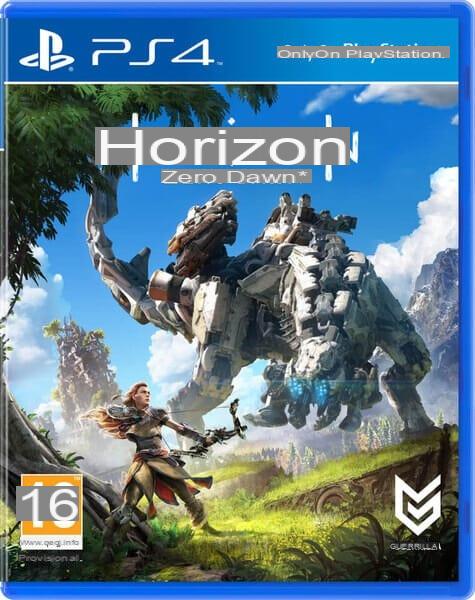 Horizon: Zero Dawn is a vast, fun, beautiful to watch and exciting game above all thanks to the charisma of its protagonist and the fully satisfying narrative arc of the main story. Are we facing an absolute masterpiece of the genre of open-world adventures? No, not yet: the freedom granted to the player is significantly lower than in other recent triple A productions. However, absolutely solid foundations have been laid for a saga that can reach its maturity in future chapters and finally produce an excellent work.

Splendid to look at, this game will make photo mode lovers happy: the Decima Engine is amazing especially for the impeccable management of the light and for how it renders the night-day cycle. The expressions of the characters during the movies can be improved and, albeit to a small extent, they tend to break the enchantment generated by the graphics engine in the game phases.

Excellent soundtrack and well integrated with the various phases of the game. Good dubbing in Italian.

Excellent control system that allows Aloy to move easily and reactively. Very engaging and spectacular action phases. The open-world world is a bit lacking in secondary stories and the freedom of interaction and exploration are limited when compared to those of other games.