Pixel art reminds us of the times when there were no tutorials outside the instruction manual and when the difficulty was generally high and calibrated on a level that we now consider as experts. Hyper Light Drifter seems almost created in that period, standing out with simple but stylish retro graphics and playability that does not discount anyone.

It all begins with a sequence composed of silent images, of menacing giants physically towering over the protagonist. However, in a moment these are pulverized, suggesting that ours is fighting against something much more dangerous, shaken by the urge to ward off his nightmares, but weakened like the disastrous world that surrounds him. A silent narrative, carried on by splinters of angular squares, yet endowed with refinement and suggestive strength. The crumbling of the imposing giants is enough to make us understand the gravity of the situation, the importance of the mission and the disproportionate threat that must be rejected. Rough images and silences that are therefore not a limit, but know how to make themselves understood, transmitting the same visual impact with which Hayao Miyazaki hypothesized the cataclysm in his cautionary works such as Nausicaa and Laputa.
Going into the exploration of the world manifests the parallel with another Miyazaki: Hidetaka, the creator of the Dark Souls series (without forgetting Demon's, Bloodborne and some Armored Cores). The comparison with the Souls is not so much linked to the mechanics as to the setting, to having to fail and retry passes and clashes against enemies, getting to know the game even through defeat, to learn its dynamics.

The gameplay also traces the action games of the 80-90s, influenced by a demanding difficulty and focused on mechanics that require a mixture of knowledge of the title and skills to be mastered. In fact, the second half of the work lies in the execution of the techniques, which requires the player to mature in their use. The end result is a rather challenging experience, suitable for those looking for consistent gameplay, to be tamed like a wild horse, which if faced superficially, ends up unsaddling its rider.

The controls are simple and the basic actions intuitive, despite the lack of a tutorial that would be useful to better understand some mechanics. The shot allows us to jump along platforms, go around obstacles, ditches, but it is also indispensable in combat, not only as a defense tool to dodge, but also as an offense to charge enemies. The attacks instead involve the use of the sword and a pistol that recharges thanks to the blows inflicted, a combination that keeps the close combat dominant.
As you progress you can get new skills, but you always have to know how to use them. Progression in the game does not guarantee an automatic upgrade, perhaps obtained simply by accumulating statistics as in other titles. The player always remains the architect of his victory or defeat, blaming himself for every failure or celebrating himself for every success.

The journey instead starts from a central village where it is necessary to reactivate a device located in the middle; the purpose and springboard of this adventure along the main macro areas, which are in turn divided into other sections. Although there may be some resemblance to the visual and exploration of Zelda 3, the pace is different, alternating between furious, tight and bloody fights, which do not skimp to raise the tension, with a sometimes peaceful wandering and search, where the player it is immersed in a nature pervaded by temples and ruins, with technological structures that peek out from marble architectures from another era.
An anachronistic combination of warm terracotta and cold steel, between frozen forests and elevators studded with neon lights and laser doors. A very successful coexistence between two apparently irreconcilable opposites, a continuous “cohesive tear” (an impossible oxymoron like “boiling ice”, but made real here) between the different times of exploration and struggle, and the different calls of the setting.
To make this sensation even more permeating are the music, also minimal and dosed, like the graphics, yet capable of filling the moments without saying anything more than what is needed to arouse a certain emotion in the player or to underline a certain aspect.. Small touches of the piano, alternated with a pause that lets the last note echo, leaving us time to savor it and merge it with the visual aspect, or sound effects inserted with precision and without being redundant.
The pixel graphics are sometimes sparse, but suggestive and well animated. This style has been exploited by filling each screen with shades and colors, seeking a minimal aesthetic on an aesthetic level.

The environments are the best part, although there is a rather unpleasant lack of characters in the characters, which makes many of them little more than an incongruent lump of squares, to the point that often looking at a single still image you cannot even understand what you are observing. Things improve with the game in action, thanks to the aforementioned animations, which greatly enhance the final result. Speaking of defects, it is necessary to mention the interface that speaks exclusively in images, even when it has to suggest to the player the goal to be achieved or what the interaction with a certain point consists of, producing a certain disorientation or frequent aimless wandering, in look for solutions.

Hyper Light Drifter is capable of combining ideas and playability in a suggestive painting. The setting is inspired and supported by a minimal but captivating pixel graphics, accompanied by a sound sector that perfectly assists the transport of the player in the visited world. The gameplay is challenging but rewarding, offering a typical video game experience with a furious pace and stimulating challenge.

Hyper Light Drifter is distributed in digital format for Playstation 4, Xbox One, PC and recently also for Switch. In this latest version, a few things have been added, such as two new weapons and an item that helps find items to collect, as well as the new Tower Climb. However, these are small additions, nothing that alone is worth repurchasing if you have already played it elsewhere two years ago, as much as a tribute to apologize for the delay in converting it to the Nintendo console. 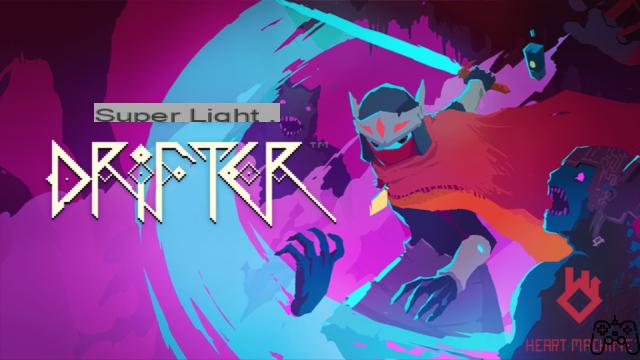 The pixel art used in the game manages to produce enchanting views and landscapes, useful to enhance the setting. The characters, however, are often reduced to little more than a mass of confused and jumbled pixels. The animations, however, are done quite well and make the whole more pleasant in action, compared to simple static screens.

A soundtrack that perfectly mixes silence and music, drying the adventure from the dialogues to let images and atmospheres flow with a remarkable suggestive power. The musical themes are suitable for the setting, lining it with grace and delicacy, like a glove.

A game as precise as a Swiss watch, demanding, but with a focus on making its challenges consistent with its gameplay and the mechanics on which it is based.

Did you like the article? Share it!
Audio Video Hyper Light Drifter
Where to find TM23 Steel Tail in Pokémon Brilliant Diamond and Shining Pearl? ❯