It was since the days of Toadstool Tour on Nintendo GameCube that I was hoping that the Mushroom Kingdom would host a new tournament between fairways, greens and bunkers. The announcement of Mario Golf Super Rush for Nintendo Switch it arrived like fresh rain on a sunny desert. Sports disciplines have always been a staple of the series of side titles dedicated to Mario with basketball, Olympic games and tennis that have interspersed the platform adventures of Nintendo's mustache on several occasions. Unfortunately in recent years there has not been a great response in terms of quality and often these titles have become a very casual filler and little supported by users and the parent company.

Camelot, with its long experience in terms of Mario & Co.-themed sports, once again had the burden of developing this Super Rush. This game could be a relaunch for this long-lived team, after the not exactly exciting latest publications of Tennis and waiting for a new football title from Mario (dormant but never vanished desire of many players). As a prodigal caddy, I will try to give you the right suggestions to understand if this experience lives up to its name.

A story without a story

As a discreet connoisseur of golf, its rules and its basic dictates, I skipped the deep textual guide that explains the game controls and the basic rules after a couple of readings. I also did this because I quickly realized that I could have everything from story mode. The slow progression of the various single-player events and the very low level of challenge make the story mode a long and tedious tutorial good only for upgrading the Mii character and unlocking all five playing fields. You often find yourself with downtime and activities for their own sake that don't even pull a smile.

The not too long adventure brings practically nothing satisfactory in terms of gameplay and gaming experience. It shows up very slow in rhythm and discharges any flash that gives a valid reason to justify its presence. The only moments that deserve to be played are the sporadic ones fights with bosses, made as if they were arena battles very similar to minigames. For the rest it all boils down to unlocking clubs with special abilities that hardly impact gameplay at all. Boredom is so great that you almost immediately want to try your hand at multiplayer.

Frantic corsets on the green

Entering the free play mode to play four holes in company, you will find a rather sparse and simple menu that offers the different game modes. From the classic tour through the holes, passing through Speed ​​Golf and Battaglia Golf. Classic mode is very basic, but the addition of the special shots emphasizes the arcade nature of the game. There is a desire to make the games more unpredictable and to add a bit of tactics during the holes by having to choose when to use the special shot. However, it is perceived that in Super Rush the lion's share is played by the Speed ​​Golf mode, much praised by Nintendo during the game's promotion period. And in fact the need not only to be precise in making shots, but also to be fast helps to make this mode very hectic and fun by forcing you to think quickly and often to make less predictable choices. Running fast on the green with the characters and managing their stamina is a component that seems trivial, but which has a considerable impact on the gameplay and makes this sport much less static and slow, therefore more fun for those who do not like the long waits of the opponent shots.

Mario Golf: Super Rush is still satisfying and fun all in all

On the other hand, the Golf Battle is negligible, which requires you to conquer three holes of your choice among those available in an arena before the opponents do the same. A modality that acts as a corollary to the two main ones and which can only represent an occasional alternative between one round of holes and the next. In every mode, Mario Golf: Super Rush is still satisfying and fun all in all thanks to a very well taken care of physics that forces you to think very deeply about each shot before making the final swing. There is a fair compromise between technique and accessibility which offers many different combinations of effects to be able to get to the hole without ending up in bunkers or on other obstacles on the ground. These combinations will be indispensable in order to manage the gradients, trees and other obstacles that the various maps, quite differentiated without being interposed between the player and the coveted birdie.

Online, but without tournaments

The gameplay is enriched with differentiation thanks to the stats and special shots of each golfer on the Mario Golf: Super Rush roster. There is not only the power of the shot, but also the control of the ball, the rotation, the speed and the resistance - the latter being useful in Speed ​​Golf - which define the type of game of the player. Special shots have different effects with which you can sweep away the opponent's balls or add obstacles to make the next shot more difficult. It must be admitted that some type of special shot is repeated a little too many times and that the most impacting on the gameplay are limited to less powerful characters, all to seek a balance of the gameplay that unfortunately is not achieved in a perfect way, making however some characters are more advantaged than others.

We talked about the ardent desire to play online to have opponents up to it, but even in this mode there are some limitations that are a bit 'turn up the nose. It is true that the stability of the servers seems more than good and the matchmaking (at least in the first few weeks) was fast, but multiplayer is castrated by the absence of an asynchronous online game mode or the ability to create tournaments. I waited another two weeks to give the game time to update and offer these features. And instead nothing. Not even a small mode that could resemble the tournaments and groups that can be organized in Mario Kart.

It is true that too many players would have created too much chaos in Speed ​​Golf and that in the classic mode the waiting times would have been extended (which would have been reduced if you could play in asynchronous mode), but that cannot be a completely acceptable justification. Limiting golf to just four players and not finding a place to hold a longer, more structured tournament that makes us feel like new Tiger Woods is very disheartening. Each online game is reduced to an impromptu pastime with a few friends to see who can do more with the bat. I do not rule out that in the future with updates this aspect may change, but for now the online Mario Golf: Super Rush represents yet another wasted opportunity for Nintendo to try to propose a structured e-sports game on Nintendo Switch.

What do my eyes see!

Fortunately, the soundtrack is one that Nintendo has accustomed us to appreciate, fresh, lively and upbeat orchestral sounds even if perhaps a little less unforgettable than other productions. The sounds are also very clean, clear and well sampled, enriching the action with sonic details to be listened to especially with headphones. A plus is the dubbing in Italian of the commentary during the matches. These are simple sentences that only tell if a shot has been performed properly or what kind of shot you are trying to complete.

Unfortunately, however, the good that reaches the ear is soiled by what the eyes catch. Although the liveliness and the typical style of the Mushroom Kingdom is preponderant, the realization of the scenarios and characters is a bit ruined by some graphic defects. The textures of the green, of the rocks are very washed out and lack volume. The models of golfers are equally fluctuating in terms of attention to detail and with a feeling of "plasticky" especially with the effects of wet. The playing fields on a general level are acceptable, while the settings that serve as the hub for the story mode are rough, edgy and free of bite. It lacks character, it lacks that flicker that differentiates a game from a good game.

I waited two weeks to see if the game got the updates that I complained about, playing for at least thirty hours between single player and multiplayer. 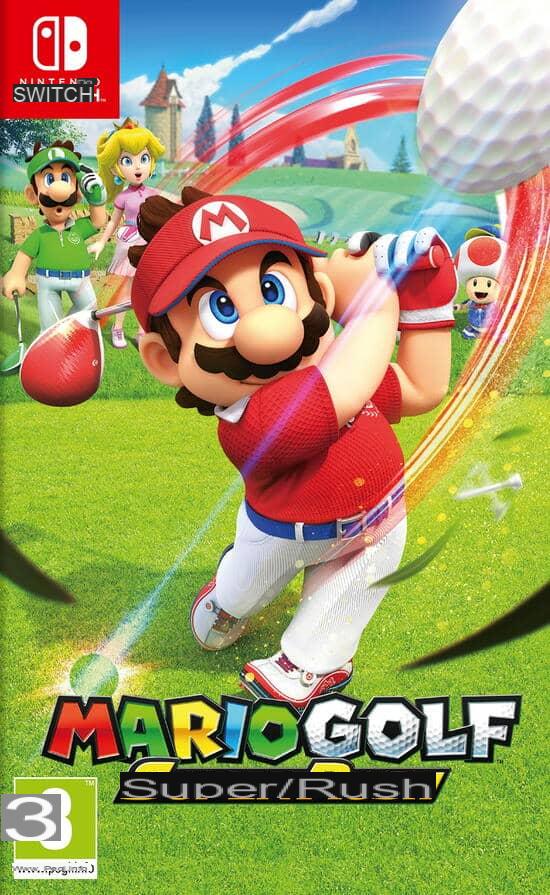 To say it all, the defect of this sports title in which Super Mario is competing after so many years is also the very nature of the sport to which it refers. Golf is a niche sport, less popular than others and which has few followers. But certainly more could be done for a series that had in any case gathered followers in the course of its evolution thanks to Camelot and Nintendo. Instead, the result is a casual game that could have been something more, but that doesn't succeed; an experiment only half successful, a filler title of the Nintendo Switch lineup waiting (and I'll never stop saying it) that Camelot and Nintendo are convinced to develop a new Mario Football.

The bright colors are there, the atmosphere of the Mushroom kingdom too. But the textures and modeling of some scenarios, especially off the green, are very uninspired. The menus are far too simple and lacking in detail. It was expected more given the results obtained by other games on character models and settings of other Nintendo Switch productions.

Nothing terrifyingly exciting, but all functional. The orchestral mix of background tracks joins the canonical sounds of the characters' voices typical of Super Mario's friends and antagonists. A half point more is given to the Italian dubbing of the voiceover comments on the shots.

Speed ​​Golf changes the cards making this reasoned and slow sport a little more dynamic, adrenaline-pumping and unpredictable. All ruined by an uninspired single player. In multiplayer, inexplicably lacking (for now) tournament mode and the possibility of playing asynchronously in more than four players. Bad very bad. The physics of the shots are good, but that alone can't hold up the whole game. Golf Rush is a nice casual game, but no more than that.

Did you like the article? Share it!
Audio Video Mario Golf: Super Rush - the mad rush to par
Animal Crossing New Horizons: How to populate the island with new inhabitants ❯

add a comment of Mario Golf: Super Rush - the mad rush to par