Released without too much fanfare last November 8, the date on which the release of a certain Death Stranding made enough talk about itself, Mario & Sonic at the Tokyo 2020 Olympic Games is the sixth installment of the collaboration series between Nintendo and Sega officially licensed by the International Olympic Committee. Skipped the winter chapter of 2018 in PyeongChang, this new multi-event party game in sports sauce has the task of rehabilitating the series after the forgettable episode of Rio 2016. Fasten the seat belts of the plane, and of the time machine, because you fly towards Tokyo in 2020 and 1964!

Journey into the pixelated past

One of the biggest innovations of the game is the presence of a Story Mode. Mario and Sonic, together with their arch enemies Bowser and Dr. Eggman, are sucked into an arcade videogame set during the Tokyo Olympics in 1964. This banal narrative device gives life to a plot definitely dedicated to the little ones, despite a exaggerated verbiage, that has the advantage of making us wander between the Tokyo of 2020 and that of 1964 through a map with micro locations who will surely be able to snatch a smile from anyone who has visited the Japanese capital. As the story progresses, you will gradually face all the sports available, in addition to other minigames that can only be unlocked through the campaign. In addition, as a small bonus there are dialogues with non-player characters that allow you to discover many goodies about the Olympic Games and Japanese culture. Nothing striking is clear: the Story Mode is unfortunately a half-exploited opportunity, with a sluggish progression and devoid of elements that can really excite or entertain beyond the games themselves.

The focal point of the whole experience are obviously the various sporting events that can be played in single player, in local multiplayer (both with a single Switch and multiple controllers, and with multiple consoles) and in online multiplayer. The characters that can be selected are twenty in total, ten from both series, plus others exclusive to certain disciplines. Each character has, in theory, distinctive characteristics in the physical approach to sport, but that's hardly one you will notice. On the other hand, great emphasis was placed on control systems which are almost always three different for each discipline: only buttons, single joycon with motion sensors or double joycon with buttons and motion sensors.

The sports present are a total of twenty-nine , divided in:

Variety is certainly not an issue: from classic athletics disciplines to team sports up to competitions in the swimming pool or at the shooting range. Most of the events allow, when faced in multiplayer, to choose the cooperative or competitive mode to do of Mario & Sonic at the Tokyo 2020 Olympic Games the perfect party game for the Christmas holidays in family. However, the immediacy of the titles should not be misleading: several of them, such as karate or rugby, have more complex mechanics than it seems at first glance and only after several games can you grasp their depth. From this point of view the Sega developers did a great job: there are no examples of particularly negative events although it is clear that some are weaker than others, such as the throwing of the discus or badminton and ping pong which suffer from excessive automation of the mechanics. A great note of merit should be made to the 1964 events: a real genius that plays with the nostalgia effect, and the general absence of competitors on the style of the classic Track & Field titles, to give away some of the best disciplines of the whole package.

If the individual events are undoubtedly successful, the same cannot be said of the entire structure that supports them. The title suffers from a general lack of options which does not always allow you to fully enjoy the beauty of events. Each discipline only allows you to customize the level of difficulty, but there is no selection of number of rounds, game times or even just the possibility of creating playlists of events. Due to this last deficiency, during the quick play you are constantly forced to return to the event selection screen at the end of each of them, with the consequent new selection of the character. Furthermore, the inability to control the length of matches makes some matches such as soccer or volleyball excessively short and therefore difficult to appreciate calmly. Online the situation is slightly better: if nothing else, you can choose between quick matches and classified matches that allow you to get points and records. The stability of the game during online multiplayer sessions has always been positive. Another not insignificant defect is to be found in the tutorials of the individual disciplines which, being textual only, are tedious and often not very useful for understanding the mechanics.

From a graphic point of view Mario & Sonic at the Tokyo 2020 Olympic Games performs well overall. The polygonal models of the characters are in line with the other productions of the Super Mario series on the Nintendo Switch with excellent animations and customized costumes for many sports disciplines. A little more lacking are some settings which have bare textures and a general emptiness, especially when contrasted with other more iconic and better realized ones such as the pedestrian crossing of Shibuya. Without having certain data, I can say that the game runs with a dynamic resolution in portable and fixed mode, and often reaches the two maximum configurations of 720p and 1080p with a rather stable frame rate at 60fps. The 1964 pixel art package of disciplines is also visually exquisite, although I initially turned my nose up at the use of 8-bit sprites for Mario characters and 16-bit sprites for Sonic characters: what kind of senseless choice is this? The classic sprites of the Super Nintendo era of Super Mario would certainly have been more suitable paired with those of Sonic's Megadrive. As for the sound accompaniment, the Sega team did a great job: i main themes are very pleasant in their oriental sound and the sound effects during the events perfectly accompany their development.

I played Mario & Sonic at the Tokyo 2020 Olympic Games with a personally purchased copy. I completed the campaign and played several hours in local and online multiplayer testing various control methods. 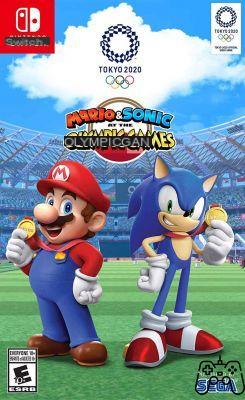 A title without competitors

Mario & Sonic at the Tokyo 2020 Olympic Games is a great Christmas holiday party game that greatly enhances the bad Rio 2016 experience. Most of the minigames are fun and straightforward, with even a degree of depth for anyone who wants to challenge the world in the online leaderboards. The great quality of the individual events is not matched by the story mode and by a corollary of unsatisfactory game modes and options that partially undermine the success of the entire package. Despite this, I would definitely recommend the title also by virtue of its uniqueness status as a multi-event sportsman in the current videogame landscape.

Pleasant, colorful and well animated, the graphics of the title are perfectly in line with the other productions of this caliber on the Switch. The introduction of disciplines in pixel art is a genius, despite the slip on the 8bit sprites of Super Mario.

The musical accompaniment does its duty with catchy themes, never annoying and epic when needed. The effects during sporting events are also very good. There is no dubbing.

After completing the forgettable Story Mode, the heart of the title is great: the minigames are almost all fun, easy to play but potentially complex to master. Too bad for an almost total lack of customization options for these experiences which significantly affects their replayability in the long run.

Did you like the article? Share it!
Audio Video Mario & Sonic at the Tokyo 2020 Olympic Games - Bronze Medal
Best Pokémon Teams for the Master League Premier Classic in Pokémon Go - November 2021 ❯