If Metro 2033 Redux had the task of introducing - in the best way - a story as fascinating as it is surprisingly rich, the second chapter of the saga carries an important burden: to conclude it, or in any case complete it, in the best way.

We immediately want to free ourselves from the elephant in the room: Metro: Last Light (Redux) fully succeeds in the enterprise and, indeed, it manages to improve the overall experience of the first chapter. All this is done with great care by the 4A Games guys, who blindly rely on the excellent playful formula of Metro 2033 and perfect it as much as possible, without distorting the global experience in the least.

Once the game has started, in fact, we will immediately feel at home, and not just “pad in hand”: even on the narrative level, the title takes up in all respects from the final events of the first chapter.

Moscow, 2034 - A year has passed since the impact of the missile launched by Artyom on the den of the Bleak. Rumors about the discovery of the D6 and the riches it contains have spread like wildfire. Khan, a mysterious wanderer, informs the protagonist, who has now become a Ranger, that there is a survivor. The wanderer believes that the remaining Bleak is the key to the future of humanity and wants to find it in order to communicate with him; Miller, on the other hand, the leader of the Rangers, wants to eliminate him because he believes he is a threat.

This prompts him to send Artyom to the surface, alongside his daughter, Anna, the best sniper in the Rangers. Once he finds the Grim, a child, and discovers a shocking truth about his past, Artyom decides to make amends for the horror he committed by exterminating the Grim and protecting the last one left.. The protagonist will thus find himself having to fight hard to bring home the skin and be able to keep the little one safe. The story, always well articulated through the division into chapters and the story in the first person, is no longer taken from the novel by Glukhovsky, but it is still solid, interesting and full of twists. The world is the same, old, corrupt and dangerous place, enriched here by the horrible sin committed against the Dark. Artyom presents himself as a character devoured by feelings of guilt, the moment he realizes the mistake he has made, and is determined to help the small and defenseless survivor.

The truth is different from what appeared before, and the discoveries that are made throughout history say it loudly: the dark ones were never the threat, but humans themselves are. The enemy here, in fact, are no longer those mysterious humanoid creatures but the Red Line, a paramilitary organization willing to do anything to win. The story remains solid and convincing, in some ways even more so than the first chapter, in which some details were only sketchy.

Metro: Last Light Redux doesn't differ in the slightest from its predecessor, for better or for worse. Level of difficulty, variety of monsters and all the rest, is absolutely in line with the first chapter, increasing even more the feeling of "continuity" offered by the production.

Net of a work - in truth rather modest - of finishing as regards the variety and quality of the guns, the gameplay of Metro: Last Light Redux does not work miracles, proving to be solid, current and, above all, functional. We are therefore once again faced with a dynamic and fun FPS, characterized by a good amount of approaches to battles, a level of challenge pulled upwards and a rather limited exploration factor.

We did not expect great revolutions in this respect, of course, and perhaps we would not even have wanted them: after all, the first chapter already worked perfectly, and distorting the game formula could have represented a not negligible false step.

What Metro: Last Light differs - albeit slightly - from Metro 2033 is in the variety of settings, much higher than the first and, to be precise, more characterized by very pleasant outdoor sections.

The real flaw of the first was probably that of being almost always in the dark underground tunnels, and this flaw has been significantly retouched in this second chapter. Some sections of the game are truly inspired - especially those regarding Artyom's flashbacks - and offer us an unexpected and nostalgic glimpse of pre-apocalyptic life more than ever. Even the various sequences in which our protagonist lets himself be followed by little Tetro are very touching and have tore us a tear on more than one occasion.

These two stylistic solutions also had the function of slightly lengthening the duration of the title, which exceeds, albeit slightly, the first Metro in terms of longevity. Once again, however, a little more than will be enough to complete the title ten, eleven hours, albeit less "schematic" than those of its predecessor.

Graphically speaking, Metro: Last Light Redux does not differ much from Metro 2033 Redux, but offers a decidedly superior technical-artistic sector.

On Xbox One X, the version we used for the test, the title runs solidly at 1080p and 60 FPS, almost stable, although not exempt from noticeable drops in some circumstances. In general, however, the overall cleaning carried out on polygonal models, vegetation and textures appears more refined and functional, without however making one cry out to a miracle. The overall glance, however, is very respectable, as we also said a moment ago, and is backed up by a greater number of outdoor sections, which we appreciated a lot.

Nothing to say about the sound sector: once again the work done on the dubbing is of excellent workmanship, the sound of the weapons is credible and in general the music is adequate and relevant to the various situations.

Metro: Last Light succeeds in the arduous task of becoming one of the few sequels that manage to improve compared to its predecessor, and not only in the gaming environment.

The story set up for this second (and apparently conclusive) chapter of the saga also proves to be superior to that of the first, then graced by a technical cleanliness and a more inspired artistic vein.

Too bad for a perhaps a little cryptic ending and for a playful formula that is too tied to that of its predecessor: with a little more effort, in this respect, we could have found a masterpiece across the board. It remains, however, a solid and intriguing FPS, characterized by an engaging story and an out-of-scale narrative quality, especially when you consider the genre in question.

We recently replayed Metro: Last Light Redux on Xbox One X thanks to the introduction in the Game Pass catalog after having already played it on PlayStation 4 at the time of publication. 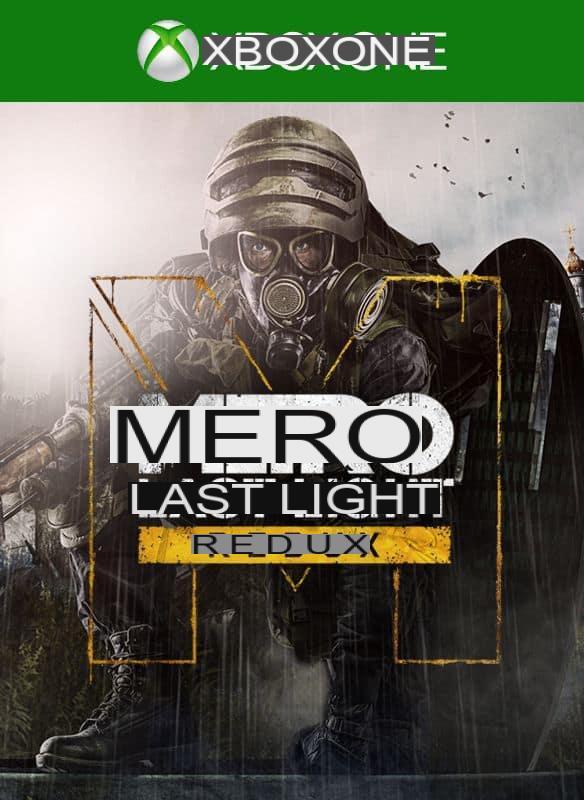 Metro: Last Light Redux offers a technical sector certainly superior to that of Metro 2033, without however making a miracle cry. The work done, however, is of good quality: 1080p and 60 FPS are there and overall the title does not offer big blunders (but not even miracles) in this respect.

Once again, the audio sector is one of the strengths of the production. Excellent dubbing, very good sounds on effects such as shots, cries of monsters and so on.

The gameplay of Metro: Last Light Redux differs very little from that of the first chapter, for better or for worse. The few differences are mainly attributable to greater overall stability (attributable, however, to other factors) and a few more weapons. However, it remains a solid, difficult and intriguing FPS like few others.