Ori and the Will of the Wisps: a practically perfect metroidvania

When we played Ori and the Blind Forest in 2015, the Redmond house was struggling against its direct rival, especially in proposing a catalog of exclusives that justified the purchase of the Xbox. This metroidvania, characterized by an artistic style that had attracted attention from the beginning, arrived on the market giving a breath of fresh air to the Microsoft catalog and paving the way for what would be a slow and delicate recovery. Five years later, Moon Studios is back with a sequel full of expectations: Ori and the Will of the Wisps. Has the wait paid off? Find out in our review.

Let's clarify immediately that this new chapter does not revolutionize the mechanics at the base of metroidvania, nor those at the base of the first chapter.

One would be very wrong, however, if one considered it a mere more of the same.

If the narrative incipit and the first steps into the game world seem to trace the 2015 debut in a familiar way, one soon realizes that the evolution made to the gameplay mechanics is almost radical. The new Ori not only improves on everything that has been good with the first chapter, but takes full hands (and in an intelligent way) directly from other successful video games of the last decade, Hollow Knight and Rayman Legends in the first place..

The beating heart of Ori undoubtedly remains the platforming phase.

However, a long series of introductions have made the boundless 2D map fertile ground not only for the runs between one platform and another, but for the introduction of souls like elements already seen in large part in Hollow Knight. From cryptic secondary quests that expand the narrative background of the title, up to the introduction of a cartographer able to provide us with the complete morphology of the explored area (actually not as essential as it would seem): many aspects recall the title of the Team Cherry. The introduction of these elements, however, is certainly soft, making the title more fluid and smooth in the exploration and discovery phases. There will never be quests difficult enough to complete, just as the cartographer's positions will never be too hidden or complicated to reach. In short, Ori and the Will of the Wisps still remains largely a metroidvania strongly characterized by its platform component, immersed however in a context that makes practically every aspect pleasant and that also lightens an oldschool backtracking of a genre still strongly anchored to the years. '90.

The game was completed in its version for Xbox One S. Unfortunately, we must report a technical sector that is really not up to par and very little optimized on this platform. Frame rate drops are very frequent in the most agitated situations, as well as stuttering problems in the passage between one section and another. You will also come across numerous freezes by browsing the menu. The gaming experience, however, is not impacted that much, but in some places the technical problems are quite annoying. 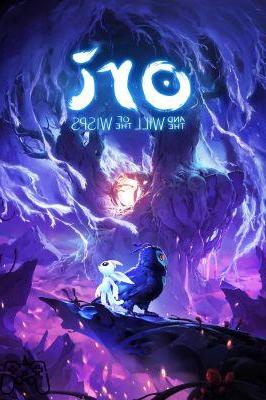 However, where the Austrian developers have invested the greatest efforts is undoubtedly in the evolution of the beating heart of the game: the platform and action phases. With the acquisition of the various upgrades, the areas are exponentially enriched with dynamism and are explosive in different sections, where the use of powers must be linked in sequences full of adrenaline: whether it is the fight with a boss (or the escape from it) or the overcoming of a particularly difficult area, the pleasure you feel in being able to stay several seconds without touching the ground is a habit that few platformers can afford. All this is achieved above all thanks to an extremely balanced difficulty curve and a particularly responsive control system. Never in the course of the adventure will you find yourself facing insurmountable obstacles.

Trial and error still remains an important concept in gameplay, but it never generates frustration.

In its new gameplay proposal, Ori and the Will of the Wisps perfectly embodies the full maturity of a team that has fully achieved the consecration. If at the first attempt Moon Studios had shown some of his talent, today it can be considered as one of the most talented emerging studios in the videogame panorama.

Taking a quick look at the technical / artistic sector of the game, a less careful look could result in a simple sense of dejà-vu compared to the prequel. The reality, even in this case, is quite different. Ori and the Will of the Wisps proposes a technical complexity that puts the One S hardware to the test (certainly also due to a badly optimized version), proposing a very respectable physics engine for a metroidvania.

Every element of the backdrop with which Ori can interact is alive and pulsating and responds to the perturbations of the system.

We are so impressed by the simple movement of a stick to which we attach to reach a higher platform, or by the way in which the gusts of wind can move the enemies: Ori is art in movement. The style adopted is certainly very close to its predecessor, but it is certainly not a defect, where the beauty of the visual sector has given a strong imprint to the recognisability of the work. The use of colors is admirable and to be counted among the best works done in the videogame field in recent years. The color palette offers so many shades that, in some cases, it is almost difficult to distinguish between scene elements and interactive objects (the choice is yours whether to include this point among the defects or the merits of the title). This concept of nuance is also transposed from the musical point of view: the proposed soundtracks are multifaceted and exciting and play in a sublime way with the rhythm imposed by the adventure. The sense of claustrophobia of some areas is accentuated by extremely well-chosen music that conveys the darkest moments of the work, up to explode in a final, at times, truly touching, accentuated in this case by farewell music. In short, really no aspect in these five years of development has been left to chance and each sector of this sequel shines with its own light..

You will have already understood, if you have come to this point, that the judgment on Ori and the Will of the Wisps is extremely positive.

We can almost say that, in a symbolic way, a product of this invoice opened and closed the stormy relationship with Microsoft's first and second party titles during the Xbox One era, hoping that it opened a much more fruitful season from this point. of view on the next consoles of the Redmond house. Moon Studios has definitively consecrated itself and has swept away all the doubts of those who were waiting for it at the gates of the difficult examination of reconfirmation. We begin to wonder what they will do next and if there will be room for a possible third chapter. At the moment, however, we just have to enjoy this splendid example of game design enclosed in an immense artistic work.

The artistic accomplishment, as it was in the first episode, is simply astounding. Unlike its predecessor, however, Moon Studios has given a greater variety to the environments by playing in a masterly way with the use of colors and with a color palette that is simply a feast for the eyes. From a technical point of view everything seems in motion and never really static, playing perfectly with depth, despite being a 2D platformer. Excellent particle effects, some memorable bosses and some really successful environments. Too bad for the numerous technical problems that plague the One S version. If you have played it on One X, add five points too.

The soundtrack perfectly accompanies every moment of the adventure and enhances the darkest and most tense moments, in which the music becomes much darker. Every accent is always placed on the right note, both in the most difficult moments and in the most exciting ones.

Moon Studios starts from the solid foundations of the first chapter and expands them by exponentially enriching the gameplay. The more fluid and rich platforming phases of the predecessor are even more enhanced by a more advanced combat system that draws heavily from Hollow Knight. The title is refined in every aspect, if not for a backtracking and an endgame perhaps a little too oldschool.

Did you like the article? Share it!
Audio Video Ori and the Will of the Wisps: a practically perfect metroidvania
Where is the real Burmy? guide request - Pokémon Legends: Arceus ❯

add a comment of Ori and the Will of the Wisps: a practically perfect metroidvania