Although the size in this case is curiously that of a mobile product, each new production of thatgamecompany that arrives on the market cannot go unnoticed.

Following an unripe Flower and a perfect Journey, here it comes Sky: Children of the Light and we, after spending several hours immersed in his dream story, marked by faint allegories and strong emotions, are here to tell you the sweetness and poetry of one of the best games you can currently find on the App Store.

Looking back over the productions of thatgamecompany over the years, it is possible to clearly perceive what the team's mission is. It is as if their idea of ​​a video game had always been there and the boys and girls of the studio, after years, tried to decline it according to a new canon, following the current artistic inspiration and outlining a nuance of colors and emotions that in a moment they can soften the player and in the next they pierce him mercilessly. The idea has always been to create an intuitive, timeless and affordable gaming experience. So, if we stop and think about the type of launch chosen for this new game, we finally come to understand its nature, the one we hastened to define as "curious" before. Although it is expected to arrive on PCs and consoles in the future, what better platform than smartphones and tablets to test yourself, to understand if a product of this type can really be received and make a difference in a market, that of smart devices. , gray and leveled around the few successful productions.

Sky arrives on the gray shelves of the App Store: a rainbow of news inside your smartphone!

As it is easy to guess even just looking at the game images, Sky is not a completely new game but rather, in some respects it is rather derivative and does nothing to hide its nature. The references to Journey are very strong but despite this the narrative context that is traced, the themes addressed and the structure of the gameplay decisively claim their originality and dignity in comparison with the masterpiece released in 2012. And this is what, in the first place place, we liked the game or its ability to take inspiration - in an almost brazen way - from the past, combined with the courage to confront expectations, managing to create something even more daring and complex.

I bring you with me

The productions of the small Californian studio - which currently has less than thirty employees - have always tried to deal with a more or less accurate system of cooperation between users. If in Journey for example this mechanic was practically hidden in the gameplay, in Sky: Children of the Light it represents the beating heart of the adventure. Because it is true that the game can also be completed alone but the joy deriving from exploration is not the same and cannot be in any way. And then we proceed through very different realms: bright and dark, friendly and hostile, in search of spirits to save and fragments of light to collect to enhance our cloak and improve the protagonist's ability to fly.

The dotted settings seduce the player like never before on smartphones and tablets.

Much of the exploration, the achievement of new puzzles to solve and more generally of the gameplay takes place by hovering in the air, following our instincts and letting ourselves be pampered and guided by the direction of the wind currents. There are no enemies to fight or long dialogues to follow, the plot is never clear but is whispered in the player's ear, delegating various aspects to his free interpretation only to be resolved in a grandiose final phase. In the same way, even the short intermission films present are never didactic but guide the user between one moment and another and deliver him to the table. increasingly large and strongly allusive settings, painted with seductive and intriguing features. The initial exaltation turns into a form of joy and relaxation that pushes the player to explore, look for hidden places and optional areas, pampered by the soft compositions of Vincent Diamante, Audio Director and composer of the studio.

Everything I have told you is an integral part of the title and can be experienced simply by playing our game but in reality, as the developers push us to observe, in the title as in life we ​​must learn not to be afraid of "the other" because, for each of us, it is but a resource, something that we must discover. Sky: Children of the Light has a peculiar concept of diversity: the other users we see moving around us are gray, all the same, anonymous. The first interaction between players revolves around rather primitive gestures, almost as if they were mating rituals, in which we have to exchange a gift and share a candle. The candles, which can be purchased from the shop or found during the adventure, are also useful for deepening the relationships that are created between the players. There is in fact a kind of skill tree which unlocks several new possibilities for the couple. Animations, poses, emotes but also simply holding hands or chatting in chat are the main possibilities and customizations that the game offers, in the name of discovering the other and peaceful cooperation between users, without any form of competition.

The ways to communicate are many and all different from each other.

Clearly there is no need to explain to you how it can be more fascinating to hold hands, let yourself be guided by another user or try to communicate through sounds and emotes rather than delegating our communication to a normal chat. Let me be clear, it is not a possibility that you must necessarily resort to and, in all honesty, if you decide not to use it, know that I would find myself aligned with you. This is because it is a way of communicating that is too familiar, inflated and above all alienating as it is inserted in the context of the game.

With your feet on the ground

Unfortunately, however, the decision to go along with the social nature of Sky: Children of the Light and the desire to launch it as a preview on the platform that thrives on social media par excellence, turned out to be in part a double-edged sword. To interrupt that magnificent symphony of relaxation, lucubrations and cooperation we often think of touch controls which unfortunately, as is well known, do not work at their best on smaller screens. iOS 13 will support the use of Xbox and PlayStation controllers but, in the meantime, you will surely run into more than a moment in which the magic breaks and the game ends up frustrating.

The new game from the creators of Journey is currently only available for iPhone and iPad - about 196 Megabytes - while the Android version is on the way. In particular, it requires an iOS version higher than 9.0 and is compatible with iPhone models from 5S onwards and from iPad Air / iPad mini 2 onwards. Played in maximum quality on the iPhone XS Max. 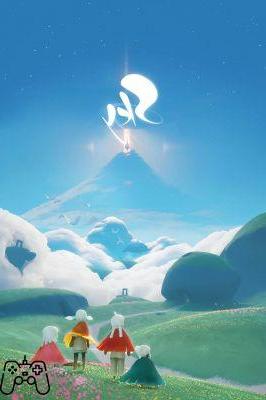 Betting against itself, with a launch first on iOS and in the future on PC, Android and Console, thatgamecompany has rightfully entered the Olympus - actually sparsely populated - of mobile games. The product is clearly the result of careful and conscious work that is reflected both in terms of the graphic aspect, one of the best you can see on a smartphone, and in the artistic one, with level music and a concept calibrated on a multiplayer component. really rich and exciting.

Technically it is one of the most beautiful and accurate games I have played on a smart device: it is also appreciable the possibility of choosing the more or less high quality of the textures and the fluidity between 30 and 60 fps, in order to preserve overheating and therefore the duration. battery.

As specified by the game itself, the sound component constitutes a non-negligible part of the entire experience and that is why the game must absolutely be approached with headphones. The music and sound effects are sweet, delicate and in the style of thatgamecompany.

The game is undoubtedly close to some concepts already seen in Journey but the new multiplayer look and the possibility of going on an adventure with friends or, even better, with strangers, makes the experience even more grandiose and unpredictable.

Did you like the article? Share it!
Audio Video Sky: Children of the Light, dai creatori di Journey
How to get The Baneful Fox mask in Pokémon Legends: Arceus ❯

add a comment of Sky: Children of the Light, dai creatori di Journey