After the return of the legendary Crash, thanks to the N. Sane Trilogy by Vicarious Visions, it was only a matter of time that even the companion of raids in the days of the first PlayStation received the same treatment. Here then comes the Spyro: Reignited Trilogy, with the first three chapters of the Insomniac dragon saga, for next-generation consoles. Let's go and see if the guys from Toys for Bob have actually managed to give new life to these famous titles and satisfy the nostalgia of the players, as did the Vicarious Visions with Crash.

Given the nature of this project, it is right to start from the graphic sector, which is also the element that most characterizes this work. Without too many words we are faced with a work of exquisite workmanship and with excellent attention to detail. Going deeper we can see how every aspect of the game has been created in such a way as to return the same sensations of the original titles and at the same time add new features that embellish the whole.

The playful and colorful style that has always characterized Spyro has been reproduced thanks to an incredibly varied color palette and vibrant colors like never before, offering a real feast for the eyes, both to old-time players and to new generations who are are preparing for this title for the first time.

It is not only the style that has been taken up in full for this trilogy, but also all the levels are really faithful to the original. The sensations of that apparently unreachable gem or that egg that we could not snatch from the thief on duty are perfectly reported without distortions., but the work of the developers did not stop there.

There are numerous goodies that can be discovered in most of the areas of the three games, such as the paintings in the world of artisans in the first game or those in the world of Tibetan monks in the second, now visible in both cases and each different from the more Thanks to these, and many other additions, the exploration of already known and familiar areas becomes a new discovery.

The commitment made in the realization of the various levels also extends to the characters who go to live there. While for the secondary ones, the path taken by the developers has tended to improve, only from a technical point of view, the characterization work already done by Insomniac. As for the protagonists and the main villains, however, there has been greater care to embellish their transposition.

Spyro is more Gascon and cheeky than ever. His lightning-fast movements only underscore this impatient character of him and can be seen more in the scenes where he struts and threatens to roast Nasty Norc as he strikes a fighting pose, making the scene even more believable and fun. Sparx, on the other hand, has been equipped with paws that he can use to greet his purple partner and the player, and can experience various moods that reflect his level of health (starting from happy, up to getting dejected more and more, as we suffer damage).

Not least the irascible Nasty Norc, who bursts with fury towards the dragons who have mocked him, or the self-centered and machinist Rypto who stalks when he is beaten, or the royal sorceress with her haughty movements when she has to command the his thugs. A real highlight of this remake (if not the spearhead), however, are the dragons of the first Spyro. While in the original game all the rescued dragons were identical (unfortunately due to the means of the time), now every single dragon is different from the other and is visually characterized in a unique way, but at the same time linked to the motive of the world that you are. visiting. As I progressed through the various levels of the first Spyro I found myself several times wanting to save every single dragon to see how it was made and I was sorry not to be able to photograph them all to keep them in a personal gallery.

The improvements made by the boys of Toys for Bob do not stop only at the graphics, but also the controls have been retouched and made more fluid and reactive than in the past. Every movement of our little dragon is responsive and immediate, making the platforming phases less frustrating and the whole experience more enjoyable and fun. Also from a gameplay point of view, other important additions have been made. The first is the free camera present in all three titles, which greatly facilitates the exploration of the various levels, especially if you want to search for every small hidden collectible. Two other interesting additions are Sparx's ability to point to the nearest gem, which can be used right away, and the minimap that can be activated or deactivated from the options menu. All these innovations, both small and large, have the merit of eliminating a whole series of critical issues that were present in the past without going to affect the general difficulty, as it is possible to complete all three titles even without using elements not present in the trilogy original.

As for the sound sector, it too has been revised and improved, with a soundtrack and audio effects that entirely reflect the sounds of the Insomniac titles and remaster them to make them more pleasant to listen to. In particular, it is possible to change the soundtrack at any time from the new version to the original one (and vice versa), simply from the break menu, for those who want to go back to basics. More than good the Italian dubbing with carefully chosen voices, a pity that they were not synchronized well with the animations of the faces, with an unpleasant effect quite visible in the first two titles, but much less in the third.

In terms of bugs, I did not find particular defects in the first two games, except for a particularly difficult case to replicate in the first chapter (but which forced me to exit and re-enter the level), while in the third I found the presence of bugs that forced some secondary missions to forcibly restart from the checkpoint with consequent loss of life. Given the good work done in other areas of making this remake, it would have been nice to see more cleanup in the code to reduce the number of frustrating situations due to certain errors.

I played Spyro: Reignited Trilogy on the standard PlayStation 4. 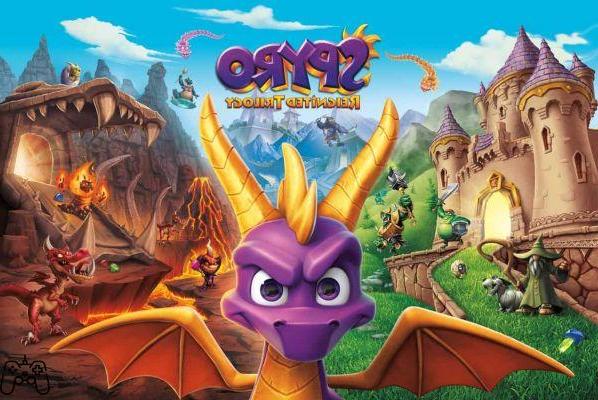 Returning to that discourse on nostalgia, which began at the beginning, we can say that Spyro: Reignited Trilogy certainly does not betray this aspect. From the first levels it becomes clear and obvious how much attention to detail the developers have used in the reproduction of the various scenarios as well as in returning the magic that Spyro knew how to give at the time of its first appearance on PlayStation. At the same time it is not a simple remaster we are talking about, but it is even more correct than in the past to talk about a real remake. The various goodies included in the levels, the greater characterization of the characters and the improvements made to the controls and camera denote the willingness of the developers to enhance, refine and even overcome the work done by those who preceded them. In conclusion, a nostalgic can find in Spyro: Reignited Trilogy what they are looking for and something more, those who want to approach the adventures of the purple dragon for the first time can find the best way to do so in this collection and discover some of the titles that marked the era of the first PlayStation.

Graphically this title is a real splendor for the eyes, both those of an adult and those of a child. The attention to detail is immense and the animations are fluid and beautiful to look at. Very interesting is the new role of the allies and villains that Spyro meets on his journey. Particular note of merit are the dragons to be saved from the first chapter which are truly fascinating for how they have been rendered.

The various sounds and the remastered soundtrack are very good. Interesting the possibility of being able to return to the original one at any time. The dubbing well acted in all three titles, with carefully selected voices, too bad for the synchronization with the faces in the first two titles a lot out of time.

Pad in hand, one cannot fail to experience the same sensations experienced by playing the three original Spyro titles. The fluidity of the controls and the manageable camera with both the analogue and the backbones makes the exploration of the various levels very pleasant and helps a lot those who want to complete the trilogy 100%. Overall a fun and enjoyable experience that even manages to slightly surpass that of the original works.