Streets of Rage 4 - The Review

How many times have fans of a series been told that a new chapter could not be made because a certain arcade genre was no longer in fashion? Almost as if at the sunset of arcades as a commercial model, even certain gameplay had ceased to be fun. Part of this creative confusion
has often blocked major studios from producing new episodes of their historical sagas, at least until the indie scene did not make its thunderous entry into the gaming market, instead screaming "YES-CAN-DO!" with the same vigor as the famous scene by Frankestein JR. The metroidvania have thus found a return of the flame precisely through the independent developers, who also thanks to an audience hungry for new experiences, have become one of the most popular genres in small-range productions.

As for scrolling fighting games, maybe it's their turn to return to the scene thanks to Streets of Rage 4, strongly desired for a long time by a host of players and now realized by the French studio DotEmu and from the developers of LizardQube and Guardcrush. Each of these worked on a specific aspect of the game to make sure that the relaunch operation was the best possible, presenting a compelling title not only for fans of the original, but also capable of capturing a new, loving audience. of the arcade approach and who may never have played the saga on MegaDrive.

Without too many preambles, the plot starts with yet another capture of the city of Wood Oak by the criminal syndicate, this time led by Mr. and Mrs. Y, successors of their father at the helm of his underworld empire. To stop the two and return the city to legality, once again a team of heroes gathers, joining alongside classic characters, even new faces. In addition to re-introducing the team from the very first chapter, with the iconic Axel, Blaze and Adam, the squad expands with the unreleased Cherry and Floyd. The first is Adam's rocker daughter, armed with an electric guitar, using it as an offensive tool for her special techniques, as well as how skating became a fighting style for her uncle Skate in previous episodes.
Floyd instead is the pupil of Dr. Zan, the scientist specializing in robotic engineering who appeared in Sor3 and like his teacher, Floyd also has cybernetic prostheses to make powerful moves. The number of selectable characters is therefore quite high, guaranteeing versatile play styles even within the same type, ranging between the longer or short-range thugs, in the case of Floyd and Adam, as well as the more specialized fast-paced characters on the game. land or air, see Blaze and Cherry. Axel remains in the middle role, for those who want to start with someone suitable for a little bit of everything.
This variety is particularly appreciated in different situations, not only for those who play alone, as they will be able to dedicate a game to each without incurring too much repetition, but also in four-player cooperative available locally, giving freedom of choice to everyone. It is still possible to face the adventure online, with a friend, but in this mode the cooperative is restricted to two people, however more than enough to recreate the essence of multiplayer fighting. 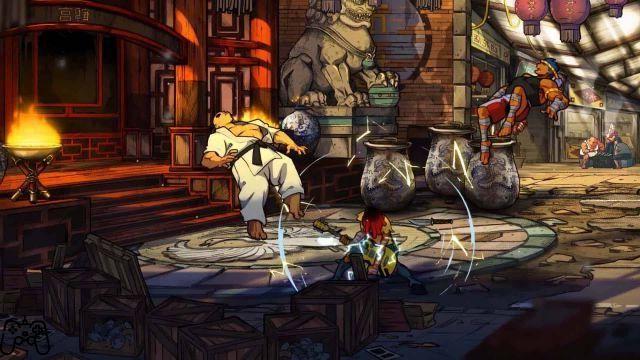 In terms of gameplay, the experience remains enjoyable in all conditions, regardless of the number of friends. The developers have in fact carried out a meticulous job to ensure that everything worked perfectly on this side, taking care of the coexistence of fluidity, a sense of heaviness of the blows and at the same time also precision of the hitboxes, to ensure that every single punch was accurate in the create a collision. In Streets of Rage 4, every impact is flawless, devoid of the woodiness that has often characterized unsuccessful attempts to revive the genre in other games tried over the past few years. However, the basic formula remains unchanged, you go through scrolling levels in which to defeat waves of enemies, collecting weapons or useful items and using a large sample of attacks and punches up to the boss at the end of the area.
In particular, what gave Sor2 and 3 a significant added value compared to the competition was the presence of several special moves, to give the player something other than just repeatedly pressing a button for hours. Each of these remains very simple to use and is now illustrated in the tutorial menu, making it very clear to learn on the fly. For the rest, only a few changes have been used, such as implementing a system for recovering lost energy with super or friendly fire, as well as the addition of aerial collisions to perform "juggle" combos, or those with which you can hit an enemy even while in the air. The overall effect is of a very high depth of play, but still smooth. An improvement of the Final Fight formula, but without ever encroaching on such complexity as to compromise the immediacy typical of scrolling fighting games.

Graphically speaking Streets of Rage 4 it presents itself in an exceptional way, with a surprisingly high quality graphics, compared to an indie scene that often leans on poor pixel art with the excuse of wanting to “pay homage” to retro titles. The level reached here is similar to titles such as Cuphead or the remake of Wonderboy, also by DotEmu and Lizardcube and represents the arrival point that was desired to be reached in the generational leap, at the time of pixels and bits. The animations are very good, but what is most striking is the refinement of the designs and the detail that permeates each individual character and arena. Each screen is a riot of colors, shades, graphic effects added to give extra impact to special moves. Perhaps only in some backdrops there is not always a minutia comparable to others, but the ensemble is still of the highest quality and among the best examples achieved by the "humble" indie scene.

The soundtrack is another point of excellence. Many of the music is signed by the French author Olivier Deriviere, but prestigious names from this sector have been involved as special guests. First of all, the Yuzo Koshiro who had dealt with the audio sector of the original saga, as well as the one who is considered a bit the Hans Zimmer of Japanese videogame soundtracks. Together with him also Yoko Shimomura, author of the music of Street Fighter 2, then of Kingdom Hearts and other games of Square-Enix, including Final Fantasy XV, in addition to historical composers of Capcom and 8-bit sagas such as Ninja Gaiden . The result pays homage to the music of the originals, offering sounds capable of mixing different influences in very elegant and rhythmic tracks. Slightly out of place the presence of audio effects sampled from the 16bit chapters, producing croaking screams, unpleasant to the point of invalidating the citation effect.

The duration is between three and four hours depending on how you play, whether alone or in cooperative, or according to the selected difficulty, making it quite flexible and able to offer a challenge to anyone. Concluding the adventure in co-op makes things faster, but by increasing the difficulty and enabling "friendly fire" things start to get slightly more complicated, just enough to spice up the game and divide the tasks between players, lengthening a pinch longevity. Although this number may seem small, it remains adequate for the reference genre, which is still very replayable for an occasional game.

As a bonus, the 16-bit versions of the selectable characters appearing in each chapter of the series are unlockable. Here it must be emphasized that the developers have decided to chisel their work to provide the best possible product. In fact, each protagonist has been implemented in the new game with the necessary precautions, redesigning the hitboxes to ensure that they integrate into the current system and increasing the effectiveness of the Sor1 characters to make up for their narrower set of moves. As a final note there is an arcade mode (more challenging) and a versus, which was already present in the episodes for MegaDrive. Here you can compete with each of the seventeen characters in arenas where there is some environmental obstacle that makes the duels more lively. Even without being anything striking, it is a nice addition to play in a carefree way, perhaps not wanting to put down the pad at the end of a campaign game. Perhaps the only real flaw is a very hasty and far too sober final sequence. Considering that the game is chock full of references and setting-conscious fan service, one might have expected more. However, the tones remain very high, thanks to an action that is always very dense and to a series of places and bosses that mark a crescendo towards the end.

The presence of numerous hand-drawn and colored elements with great attention to the chromatic choice, makes the graphics of Streets of Rage 4 really valuable and of the highest level for an indie production. The special moves are accompanied by sparkling graphic effects, adding additional nuances to emphasize the scenic impact at certain moments. Perhaps not all the backdrops are as detailed as others, but even in this aspect the general level remains high.

The soundtrack remains at the particularly high levels to which the series has accustomed its audience. Not only the historic composer Yuzo Koshiro has signed some songs, but alongside him there are also other prestigious authors such as Yoko Shimomura (author of the music of titles such as Street Fighter 2, Final Fantasy XV and Kingdom Hearts) and many others. The result is a real fantasy football game of the videogame soundtrack.

The playability is immediate and engaging, but at the same time full of elements that avoid making everything too repetitive. Each character has certain characteristics and techniques, making the choice of each of them linked to a style of play and the use of particular special moves. The combo system and hitboxes are accurate in handling hits, ensuring smooth and clean collisions. This fourth chapter takes up the best aspects of the original gameplay and makes some slight changes, to refine everything, without making it cumbersome.

Did you like the article? Share it!
Audio Video Streets of Rage 4 - The Review
How to get Spiritomb in Pokémon Brilliant Diamond and Brilliant Pearl ❯

add a comment of Streets of Rage 4 - The Review