The Legend of Zelda: Link's Awakening

Let's face it, my generation has a marked (and now abused) propensity to talk and live on nostalgia. Maybe all generations have this tendency after all. Only this generation is now in its personal peak of joy. We are constantly looking for a connection with the past, fashions of our adolescent age are re-proposed and many products find new life and new form. Sure of making a breakthrough in the market for thirty / forty-year-olds and having easy success, these products follow one another, clearly separating two currents of thought: those that "invent something new!" and those that “how much I wish a new season of McGyver with Richard Dean Anderson!”

Unconsciously, Link's Awakening does not just bring to mind the wacky chapter of the saga that appeared on GameBoy in '93. No, take ourselves in '93. Making the split of thought void and taking videogame nostalgia to other levels.
Playing with this Zelda does not necessarily make you think of its original version (luck that only happens to those who have actually played it), but opens a time gap. Whether you have played with the GameBoy or not, this dimensional portal, fueled by the aesthetics of the game, catapults anyone into their bedroom of the past, making us remember how nice it was to be able to spend the afternoons among puppets, monsters and some Lego men.

The world of Link's Awakening is sweet, colorful and incredibly toy. The colors and the rendering of the materials make it almost seem to have a diorama or a play set in your hands. Do you remember the toys of Mighty Max? Those monstrously shaped play sets that opened up and concealed an entire island, a dungeon, a palace and so on. Our toy hero was just over half an inch tall, perfectly scaled with the enemies and the play set.
Here, The legend of Zelda: Link's Awakening for Nintendo Switch is a bit of the modern day Mighty Max. A series of play sets ranging from the prairie to the desert and from the sea to the mountains, passing through a multitude of caves, dungeons, dungeons and castles.

Staying on our beautiful mat, the goal is to reach the northern limit of our game world to wake up the Wind fish, holed up and sleeping inside a gigantic egg.
To fulfill our unfortunate fate (it is still a shipwreck!), We are asked to collect the eight sacred instruments, essential to awaken the sleeping Windfish and thus be able to leave the island.
Just like in any mat game, the coherence between the characters goes a bit to the winds, and therefore between Link and his classic enemies pop up Smack fish, Goomba, Eggs of Yoshiana inspiration and whoever has more, the more he puts.
These variations on the characters (re) give Awakening its reputation as the wackiest episode of the series, not betraying however as a narrative, managing to tell a story that is still fresh and sometimes unpredictable.

Set aside the freedom and epicness of Breath of the Wild, with Awakening we return to the most classic of Zeldian schemes: an adventure marked by the need to collect the tools necessary to continue both in the exploration of the map and to face the dungeons.
Dungeon, already! Virtually abandoned in the last chapter of the saga, they are now back in their most classic composition. One after the other they bestow loot, rupees, equipment and sacred tools useful to wake the Windfish who sleeps in his egg.
Although the difficulty of the dungeons is not at the levels of the 3D episodes, remaining rather simple as the edition from which it derives, the variety and number of mazes present still bring beautiful doses of joy to the most hardened Zeldians. Between keys to find, buttons to activate, rooms to discover and end-of-dungeon baddies to defeat, there's really something to have fun with! Although the tools in our possession lead to a precise order of exploration of the dungeons and that therefore the game itself guides most of our choices, the rhythm is marked exclusively by the player, still managing to convey a sense of adventure and discovery as if he had seen some for some time. Getting around Koholint Island is a truly amazing experience. Each tuft of grass cut (and you will cut plenty) can hide secret entrances to some underground or make one of the many Shells hidden around the island appear.
The desire to discover every secret, know every character and find every shell and every fragment of heart, will make you beat every single square centimeter of the island. With the classicism of the game architecture, a gameplay strongly anchored to the past also returns.
A restyled menu, the shield entrusted to the R key and the possibility of assigning X and Y two instruments at the same time (in addition to the sword that can be drawn with B) make the new version a concentrate of ease and fluidity, when compared to its counterpart released on GameBoy . 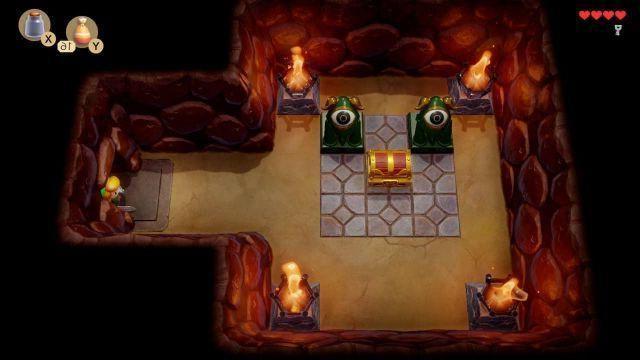 Initially out of place the inability to move freely and therefore be constrained to move up to the diagonals. Choice that is easily digested after a few minutes, also attributing it to the fact that a free movement would have easily "broken" a good part of the environmental puzzles present in the game.
Curious fact: in a certain dungeon I consciously broke a puzzle thanks to that little bit of freedom granted in moving on the diagonals, obtaining a key from a boss before obtaining the necessary tool to complete that room.
The game, as in the past, offers very little information on where to go and how to do it, suggesting only the next area useful for the continuation of the story. An element that on the one hand hinders the breakneck adventure and on the other pleasantly feeds the more peaceful and meticulous exploration.
Its remake nature and classic setting place it strongly away from its predecessor Breath of the Wild, almost giving this chapter a spin-off feel.
Beyond this feeling, its portable nature can also be misleading and confusing about its intentions and target. The fact that Switch is both a fixed and portable console makes the task (absolutely unnecessary, mind you) of labeling and cataloging this episode even more difficult.
In short, is it a spin-off or a canonical episode? Is it to be considered portable or a fixed console? Is it really useful to ask yourself these questions? No.

As a nice addition exclusive to this version, the new Link's Awakening offers a sort of Puzzle Game disguised as a Maker. Or a Maker disguised as a Puzzle Game, it depends on your mood. This function allows us to face the dungeons created by us, complete with rooms, treasures, keys to find and all the ambaradan that a slap-up maze requires.
Rather than following in the footsteps of a Mario Maker and giving total creative freedom, we are faced with increasingly complex puzzles, where the main purpose is to get from the entrance of the dungeon to its final boss by matching the various tiles in our possession.
A welcome addition even if not very incisive, and certainly very far from being usable as a separate Maker.

Link's Awakening it surprises from any point of view you look at it.
A classic gameplay, but modernized and refreshed in its more woody aspects.
An innovative style that does not play on the easy feeling of deja-vù, but that teases nostalgic strings in a much deeper and more emotional way.
An adventure as valid on the home screen, as much (and perhaps more) as if enjoyed on a train, in the garden or under the covers, going to recreate that feeling of a teenage toy even more faithfully.
Net of some technical flaws and a few too many slowdowns that undermine the fluidity of the game, every aspect of this Zelda makes it essential both to its long-time fans, and to those who have discovered the Nintendo saga par excellence only with the majestic Breath of the Wild.
Now dismiss those who condemn nostalgia, sit on the ground with your legs folded, reopen the games basket, put the Link's Awakening cartridge inside the Switch and start your very own adventure!

A lot of style and a lot of sweetness, surprising colors and a wonderful miniature effect. The game goes from enviable game fluidity to significant frame rate drops. As they always say, they do not undermine the gaming experience, but they are very annoying.

All symphonies are beautifully orchestrated, string plucking and sweet melodies flood every corner of the map with a theme for each zone.

Pure and simple. The new menu, a well-designed map and the ability to equip more tools than in the past, make the adventure very fluid and enjoyable.

Did you like the article? Share it!
Audio Video The Legend of Zelda: Link's Awakening
Christmas 2019: the best offers for consoles and video games ❯

add a comment of The Legend of Zelda: Link's Awakening