The review of SoulCalibur VI, between single player and news

"Twenty years after the first chapter, SoulCalibur VI goes back to its roots, bringing new gameplay features to combat at the same time." With this phrase Bandai Namco has recently launched its own on the market SoulCalibur VI developed by Project Souls, sixth episode of the regular series (excluding Soul Blade). But do the words correspond to the facts? Does the new episode of the famous fighting game really deliver what the slogan promises? The answer, I already tell you, is yes. And in the next few lines I will explain why.

SoulCalibur VI makes the give great importance to the single player, and it does so by offering them many game options, from classic ones like arcade, training and one-on-one battles with related variables, to online mode, which allows players to fight in random or ranked matches with customizable settings and possibility to create open or private rooms.

Then there is a Museum section where you can find dozens of information and statistics on the world of SoulCalibur, on the music, the various characters and their weapons. But above all, there are a character creation mode and two campaigns entitled respectively Chronicles of the Soul and Balance of the Soul.

The mode Chronicles of the Soul is the main one and, starting from Kilik, it allows you to follow the stories of the various characters of the game in the various chapters that make it up, told through static screens full of dialogue and a series of fights, up to the final confrontation with the new antagonist, Azwel. The plot is set in the XNUMXth century, and broadly reveals the events of the original SoulCalibur by slightly modifying its history and timeline.

The narration also allows you to better understand the personalities of the characters, even the "minor" ones, and the motivations that push them or have pushed them to make certain choices. Each of them, in fact, has a detailed personal story that somehow intertwines with that of the other fighters, and the user who impersonates them from time to time can freely determine their fate through specific moral choices and situations that develop even after the fights.

Balance of the Soul it is instead a campaign dedicated to the personalized character, that is, the one created from scratch by the user through the excellent internal editor. It offers many combinations, and in building a new warrior you can choose the race among the sixteen available, including the lizards and living skeletons, the size, the facial features, the hairstyle, the clothes, the armor and therefore the weapons and fighting styles.

The mode, parallel and complementary in narrative terms to that of the Chronicles,  is full of missions, both primary and secondary, mini-games and RPG elements. In fact, the character rises in level by gaining experience one fight after another, he can enhance himself and his equipment, change weapon and therefore fighting style, be accompanied from time to time by a main character, hire mercenaries, and so on.

Furthermore, it is the player who decides the path to follow on a special map, where the possible roads to follow are highlighted. Each of these leads to a location (as long as you have the necessary money), to an event, to fights often conditioned by specific rules, and to "open" new paths and a different plot development.

The SoulCalibur VI roster is made up of about twenty characters, including the various Maxi, Yoshimitsu, Sophitia, Mitsurugi, Kilik, Nightmare, Xianghua, Ivy, Taki and Geralt from The Witcher. Each of them is characterized by a personal fighting style, accompanied by the classic set of commands which is summarized in vertical attack, horizontal attack, kick and parry, and from the combination of which then arise the various moves that each fighter is capable of.

To meet the neophytes of the e saga, however speed up the learning curve the programmers have "simplified" the controls, making some combinations executable with a single button, reduced the reaction times of the various counter moves and corrected some imperfections in the move list of the various fighters to better balance their skills and consequently the general playability.

The combat system is so fast, accessible, but at the same time well calibrated and technical.

The most significant novelty is therefore represented from the Inverted Cut, a mechanic that is activated at any time by pressing R1, useful for blocking an opponent's assault and counterattacking him, the time needed to damage him and / or reposition himself. The Chinese morra-like scheme is ideally based on a "rock, paper and scissor" system, where each of the eight available moves, three offensive and five defensive, there is one that cancels it. In this way it cannot be abused, the method works and does not unbalance the clashes. It is more complicated to describe it than to perform it after a little practice, it is no coincidence that it was designed for newbies.

For the rest we find again the "impact" parades, free rounds and with a slightly wider time window, which after pressing a button (plus, if desired, the direction) allow you to unbalance the opponent, interrupting the sequence of attacks and leaving him uncovered to any counter moves, and the holds, that is those moves that consist in grabbing the enemy and, with a short but spectacular animation, inflicting industrial amounts of damage.

Heavy damage can also be done by the Critical Blade, the custom special move that each character can exhibit in particular conditions, conceptually not dissimilar to Street Fighter Super. Provided, however, that it hits the mark: in this sense it is necessary to learn when and how to exploit it adequately, so as not to waste "her" and the effort it took to load the appropriate bar.

And then, inevitable, the Soul charge, which here has been partially reworked compared to the fifth chapter. This enhancement is available for a limited time, but enough to push the opponent away if too close, and give variable effects to warriors by unlocking additional attacks among others. The camera zooms in and blocks the time waiting for the move, but you have to pay attention to the opponent's reaction, which can decrease its duration and therefore its effectiveness by repeatedly hitting whoever is in this state.

From a technical point of view SoulCalibur VI is based on Unreal Engine 4 and the result is evident. The main characters enjoy excellent polygonal models, a good set of animations that make the action fluid, and a good attention to detail. If you want to be picky, your hair is a little disappointing, too stiff and "fake", but otherwise nothing to complain.

The most spectacular techniques are an explosion of lights, effects and “magic”.

For the arenas, are well designed and characterized, offering a great variety, although they don't shine in level of detail and have some fairly dull textures. However, it balances a whole bright color palette, with bright colors that are well suited to the fantasy context and partly mask, together with the play of light and shadow, certain imperfections. Side note for the audio sector, with a dubbing in English that alternates voices and recitations of good quality with others slightly below average, excellent sound effects and a soundtrack that goes well with the type of production. 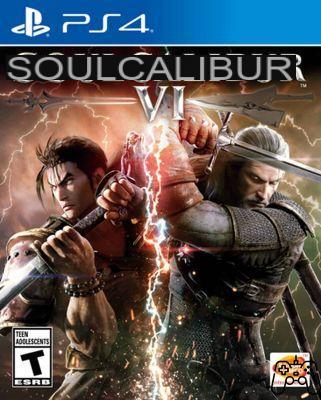 With SoulCalibur VI Bandai Namco does everything that fans expected and that was necessary to relaunch the series after the misstep of SoulCalibur V: it again inserts a plethora of modes and contents, mixes old and new elements in terms of mechanics to return a extremely satisfying gameplay, finally it makes the controls more accessible without affecting a well-calibrated and technical combat system as pleasing to the most demanding players. The only negative note, perhaps, is the lack of Tira, and the risk that its presence only via the Season Pass or future paid stand-alone DLC could constitute the starter of a policy that will also affect other fighters and important extras.

The graphic sector is beautiful, with a well-made character design and a valid design of the scenarios, very colorful albeit with some poorly defined texture and fluctuating detail. The animations and polygonal models of most of the fighters are convincing, as are the special effects linked to the most particular moves.

Good audio effects, good and in line with the genre the soundtrack. Overall, the English dubbing is discreet, apart from a couple of discordant notes.

Great attention to the single player and excellent longevity thanks to two well-structured Campaign modes and many game options. Responsive controls, classic combat system but with some new mechanics that make it fun but equally profound. Some side missions of the Balance of the Soul Campaign are a bit repetitive. Some unknowns about the future of new paid content due to the Season Pass.

Did you like the article? Share it!
Audio Video The review of SoulCalibur VI, between single player and news
List of Pokémon Commercial Evolution in Pokémon GO ❯

add a comment of The review of SoulCalibur VI, between single player and news