Vampires have always exerted a morbid attraction in the public, especially those linked to a certain fantastic and cinematographic literature. Immortal creatures of irresistibly hypnotic charm, some even beautiful and cursed, who sometimes like them even more than their rivals, the vampire hunters.

And it is precisely creatures of the night, humans in danger and blood that we speak of in the new digital work of Dontnod Entertainment, the creators of Life is Strange e Remember Me, that is to say Vampire. A title that places some emphasis on storytelling, as it was reasonable to expect given the previous work of the development team, but also on the atmosphere and, in part, the fighting.

In a dark and decadent turn of the century London, battered by a continuous rain and squeezed between an epidemic of the Spanish flu and the presence of dangerous killer creatures, war veteran Dr. Jonathan Reid finds himself transformed into a vampire. Who or "what" has changed him into a creature of the night is not clear, but certainly the new condition upsets and torments him to the bowels.
This heartbreaking conflict is well expressed by the need to feed on human blood to stop the uncontrollable thirst that like a drug pushes him to kill, and from the will to put an end to the horror by looking for a remedy.

Reid's drama it also directly affects the gameplay, since the gamer has to make moral choices that affect the way the adventure takes place, its level of difficulty and the different endings present. Drinking the blood of the victims, in fact, is useful for obtaining those experience points that increase the parameters of the character and unlock passive skills and talents to be used during clashes with different types of undead, fierce vampire hunters and the rather difficult bosses to face for via a good variety in their routines and a decent battle design in general.

Consequently, the more people Reid kills, the more powerful he becomes: he improves in the use of firearms and white ones, and learns techniques related to his status as a vampire, such as a superhuman strength capable of literally breaking an enemy in two. , or the ability to quickly move from one hostile to another. Conversely, the less blood he drinks, the harder it becomes to deal with certain opponents.

But that's not all: since many of the non-player characters that populate Dontnod Entertainment's London, divided into four explorable areas within a sandbox structure, play an important role in some events in the story, eliminating them can change the ecosystem. of the city. The risk, therefore, is that of not being able to deepen some aspects of the plot, carry out alternative tasks and make the enemies in the area become stronger, as well as increasing their presence, making it more difficult to progress in the adventure.
In short, every action has its own consequence and it is therefore necessary to find a certain balance in the choices, if you want to savor every little nuance of the adventure and complete it more or less one hundred percent.

Another key element of Vampyr's gameplay is that investigative: the protagonist's investigations to find a cure for the deadly flu epidemic, but also the author of a series of terrible murders and who reduced him to a vampire have a primary role in the economy of the title, which alternates sessions action to other quieter, "storytelling", with long dialogues with non-player characters and investigations along the lines of what has been seen in titles such as Batman: Arkham Knight.

They are the slowest and most reflective phases of the game, but also those that in my opinion allow you to better immerse yourself in the context, not only narrative but also identifying, because you can go around portions of London, as far as possible, to get to know the inhabitants, collect useful objects to enhance weapons or deepen the plot, and to admire it in all its decadent charm.

A charm that is well expressed through a refined atmosphere whose success is contributed by an excellent artistic direction and a series of particle and lighting effects capable of enhancing the night views and the various locations, at a resolution of 1080p.
In this way Vampyr compensates for graphics that seem to come from the last generation of consoles, and for some technical deficiencies, such as the presence of textures with fluctuating quality, occasional phenomena of interpenetration, and character animations a little dated, also as regards the facial expressions. I also point out that the title on PlayStation 4 it runs at 30 frames per second in a stable manner, although in a couple of circumstances I have registered some slight drops by eye and uncertainty.

Good, however, the acting at the audio level, thanks to the credible interpretation of the various characters made by the voice actors in English.

In general, the work offers a respectable sound sector, able to adequately accompany the player through the mists of White Chapel, West End, l’Ospedale Pembroke e i Docks, the four districts that make up the London of the game, with convincing and sometimes disturbing effects. The soundtrack, composed by Olivier Deriviere, author of the music of games such as Assassin's Creed IV: Black Flags and Remember Me, among others, then does the rest, effectively highlighting each phase of the adventure, from the most tense ones to those focused on the fight or, vice versa, on the more staid moments in the evolution.

I played and completed Vampyr on a smooth PlayStation 4 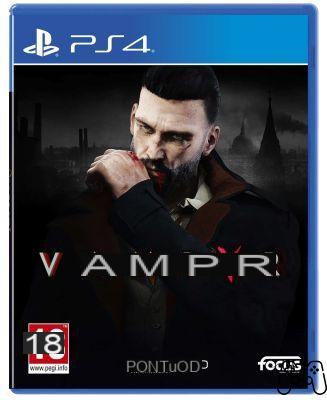 Vampyr is a good role-playing game with action elements that make the atmosphere, the narration and some well-thought-out mechanics its strengths, but penalized in part by a technical sector not up to the level of PlayStation 4. However, this does not mean that it should be rejected or underestimated: thanks to an engaging and multifaceted story, to some interesting mechanics that force the player to make moral choices that affect the progress of the adventure and therefore shape its evolution. , that of Dontnod Entertainment is in our opinion a title to play. If you like the genre, get yourself a copy, lock yourself in the house and be careful: the hunt for vampires is on!

Great art direction, nice atmosphere; every now and then some uncertainty, slightly dated graphics and animations.

The soundtrack does its job well, accompanying every moment of history properly. Ditto the audio effects. Good dubbing in English.

The battle system is well thought out, even if at times it seems a bit stiff, thanks to some dated animations of the characters; RPG elements are well implemented as are exploratory and storytelling sessions.