Everyone will have been on vacation for weeks and suddenly be assailed by that craving for pizza, pasta with sauce, lasagna or whatever food you remember home. Coined in the 60s in reference to foods that inspire nostalgia, safety and familiarity, the term "Comfort Food" has in recent years become a sad banner for any restaurant. Used in a genuine way, however, is the concept that I constantly thought about while playing Dragon Quest XI S: Echoes of a Lost Age - Final Edition. If experimental Indies, mammoth triple A and innovative VR titles are those dishes that are so coveted every day, Dragon Quest XI S is that great and extremely familiar classic that we always want to return to because we are sure to find what we really want from video games: lots of fun.

Originally released in 2017 in Japan on Playstation 4 and in a version for Nintendo 3DS never released in the West, the title then reached the western shores in 2018 on the Sony console and in the new Steam edition. From the first announcement Square Enix also promised the release also on what was known at the time as Nintendo NX, that is Switch. Years and years of waiting are certainly weighed on the shoulders of fans, but those who have been able to resist so far have certainly made the right choice: the Ultimate Edition for Nintendo Switch is the best available, and in this review I want to deepen all its news, without dwelling too much on the contents of the original game already described by Massimo Reina for the Playstation 4 version.

With the port on Nintendo Switch, Square Enix has decided to expand the potential audience of the game by enriching the entire gameplay structure with many new features, which lighten the burden of the need for experience farming, and filing out many small tedious things that slowed down a fluid progression. The comfort in using the mechanics must certainly have been one of the key points during development: Dragon Quest XI S is a title that runs smoothly, without frustrations, jams with the commands or misunderstandings of the mechanisms. Almost all the mechanics can be more or less automated with a degree of customization that is truly rare to find in the videogame landscape. For example: the fight can have a clear or fixed view, three different speeds of development and predefined tactics for each character. There customization of every aspect it can also be found in the equipment that can be automatically assigned to the characters, based on the desired statistic presets, and in a way unrelated to the aesthetic outfit, so that that new and very powerful armor does not destroy the combed look of your heroes. The map can be covered on foot or with different mounts, many additions from scratch on the Switch, with the possibility of teleportation and automatic racing. But that's not all: the crafting forge, originally recalled only in camps, can now be used anywhere by calling it up with a quick menu that speeds up even further options. Furthermore, should you find the very pleasant narrative of the title strangely tedious, all the cutscenes can be skipped and the dialogues can continue automatically. All these features are perfectly implemented in a very delicate balance between simplification and the need for a consistent level of challenge. However, the latter is not indifferent: from the middle onwards, some bosses will definitely make you sweat, especially if you choose some options of the new Draconian Mode, of the fate of Halo Skulls added in this Switch version.

Contents to no end

In addition to the main campaign present in its entirety, Dragon Quest XI S has received additional side missions on Nintendo Switch which expand the knowledge of the supporting characters of the protagonist in a rather interesting way. If this were not enough, a further ten long missions set in the new 2D environments, which we will discuss later, greatly enrich the disproportionate amount of overall content. Dragon Quest XI S has thus become a giant that requires a commitment of one hundred and more hours of play, to understand how to deal with: after the first twenty hours, rather linear in the progression, the game opens up to wider, interconnected and less guided settings. Once the main story is completed, a huge endgame full of interesting activities to complete.

A two-dimensional dive into the past

One of the biggest additions to the Nintendo Switch version of the title is the 2D mode which essentially transforms the entire game into what it would have been had it been conceived in the Super Nintendo era. It is possible to switch between 3D and 2D modes and thus play the whole adventure, but beware: each change requires the restart of the chapter with a new save, a not insignificant problem considering the considerable duration of each one. This cumbersome tediousness leads to a simple consideration: Square Enix did not intend this 2D mode to be continuously alternated in parallel with the 3D one, but as a real second game to be faced once the main one is finished. In this 2D mode, combat and exploration are modified according to the classic Dragon Quest mechanics of the pixel art era. The result is therefore full of nostalgia, greatly enriched also by special missions that can only be faced in 2D that allow you to visit sections of the worlds of the oldest Dragon Quest games. We can therefore consider this addition as a half-successful attempt: we do not hide that our dream would have been a seamless switch between the two modes.

The exploration and combat in the 2D mode follows the style not only of the graphics, but also of gameplay, of the Dragon Quest of the SNES era.

Minimal compromises for a perfect port

The passage on the small Nintendo tablet has clearly weakened the technical qualities of Dragon Quest XI S, thus making the technical sector the only inferior feature of this version compared to the others. The main problem lies in the resolution: in portable mode it does not reach the 720p of the Switch display, settling on lower values, while in docked mode it certainly exceeds the HD threshold without however reaching the definition of the Playstation 4 version. Several light sources have been resized and the quality textures reduced , but despite this most of the elements are faithfully replicated on the Switch hardware with a practically perfect frame-rate at 30fps. The conversion has been approached with great care: any textual and menu elements are rendered at the maximum resolution of 720p portable and 1080p docked for a very comfortable text reading experience. Despite the necessary renunciations, Dragon Quest XI S was and remains a splendid title to admire, thanks to the artistic mastery of Akira Toriyama and a graphic engine, Unreal Engine 4, which guarantees lighting and effects in step with the times.

Cross and delight of the game, the sound accompaniment of Dragon Quest XI S has undergone a real facelift. The tremendous MIDI music of the Playstation 4 version has been replaced by versions completely orchestrated by Tokyo Metropolitan Symphony Orchestra with a disproportionate increase in the quality of all themes. This also created a very pleasant mix of recorded and synthetic sounds, that is, those applied to most of the sound effects related to menus and interactions. We can, with a little imagination, read the entire sound sector of Dragon Quest XI S as a metaphor for the game itself: a very successful mix of tradition and modernity. The very valuable English dubbing, also supported for the first time by the option in Japanese. Unfortunately it must be admitted that many of the game's sound themes are repeated to exhaustion even in unsuitable situations: walking through the quiet nocturnal streets of Gondolia accompanied by the same festive musical theme of an afternoon run in the prairies is certainly not part of my idea of ​​pleasantness.

I played Dragon Quest XI S: Echoes of a Lost Age - Final Edition thanks to a review code provided by Nintendo, publisher of the game in the West. A demo of the game covering the first four chapters for a duration of almost ten hours can be downloaded for free on the Nintendo eShop. The demo save file is transferable to the full game. You can also download free DLC containing some useful items and alternative outfits for the characters. 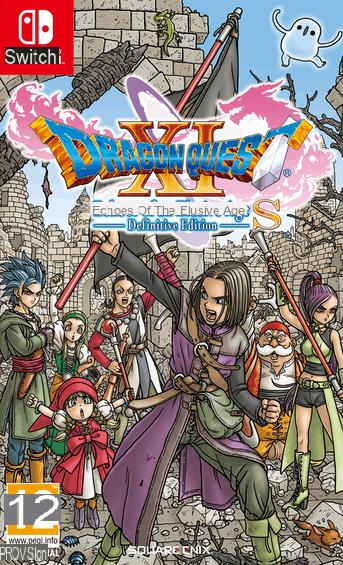 Dragon Quest XI S is like that traditional, delicious and friendly dish we crave so much after a time away from home. In a videogame landscape that struggles between market demands and an incessant desire for authorship, Square Enix gives us a title that does not reject its historical origins, but rather understands them and embraces them thanks to all those additions and arrangements necessary to make it a masterpiece that anyone can enjoy in 2019. The Nintendo Switch version, correctly called the Final Edition, is the best among those available and while sacrificing a few pixels of resolution, it pays off with an exceptional amount of additions.

The conversion on the Switch is technically perfect. Although the resolution is much lower than the other versions, the game shows no signs of particular sacrifices. The frame-rate is stable and the colorful and fairytale art style is still gorgeous.

Despite a repetitiveness of the main themes to the limit of auditory exhaustion, the soundtrack is of infinitely superior quality to that of the original version thanks to the new orchestral recordings. English or Japanese dubbing enriches most of the dialogues with great personality.

Fun, customizable and extremely comfortable, the game's gameplay is the best you can expect from a mammoth traditional jrpg. The Nintendo Switch version offers a very long series of refinements of the original that improve the fluidity of each mechanic of the title.

Did you like the article? Share it!
Audio Video Dragon Quest XI S, Comfort Food Videogame
Metro Exodus: the worthy conclusion to an epic journey ❯