When To the Moon was released, back in 2011, it presented itself as a bolt from the blue in the panorama of the medium, a title capable of moving, thrilling and, at times, entertaining. Due to its quality, the game succeeded in the enterprise, so coveted by indie realities, of developing around a loyal and small slice of the public, consecrating Kan Gao and his team towards the international market.

With guilty delay, after about seven years, taking advantage of the sequel's release, I therefore decided to recover the entire Freebird Games series, now composed of two main titles and three spin-offs, for an ever-expanding narrative universe. .

Finding Paradise, second chapter of the Sigmund Corp. Saga, I can already anticipate you, is the worthy heir of To the Moon, maintaining its superb narrative depth and delicate sound sensitivity.

The concept of the saga of which Finding Paradise is part is undoubtedly brilliant, although complex, the result of a great idea by director Kan Gao. We find ourselves in the shoes of two doctors, Eva Rosaline and Neil Watts, part of Sigmund Corp., a company dedicated to satisfying the last wish of patients on the verge of death, to live the life they have always wanted. Although the procedure obviously takes place only in the mind of those who suffer it, the fact remains that this is extremely difficult to carry out. In order to maintain logical coherence in the memories generated by the machine, it is in fact necessary to insert the required desire in the most distant explorable memory and limit oneself to keeping it constant throughout the virtual experience developed.

The leitmotif of the entire game is therefore the exploration of memory, with great attention to the depth of characters and intertwining, often with strong dramatic connotations.. The qualitative level of the dialogues and the narration reaches very deep peaks especially in the initial and final stages of the experience, trying to find a complex balance between irreverent irony - often full of references to pop culture - and introspection. The success of this particular dichotomy is all due to the chemistry of the two protagonists, Watts and Rosaline, able to juggle, never with banality or sterility, in the situations presented, through shrewd and lucid antithetical comparisons.

Those who have already played To the Moon will therefore easily find the key elements for which the title has been so loved and played, but with important differences, in particular with respect to the topics covered. In fact, if the predecessor was betting everything on the paroxysm and the consequences of a mental disorder, Finding Paradise violently pushes the accelerator on the constant and (apparently) senseless dissatisfaction of a man with the harshness of life, using for the occasion an exploration of memories no longer linear, but literally elliptical, all around a single event of which I will certainly tell you nothing.

The solution of the case, but also its very premises, will in fact remain disturbing unknowns for the entire duration of the adventure, destined to be intelligently resolved only in the intense final. Not even Colin, the patient of this episode, is aware of what he would like to change, confused as he is in the sense of guilt towards his family, who cannot explain his unhappiness in him.

The picture is therefore that of a mature narrative, enriched by surprising twists and an almost perfect characterization, which shows the side only in the intermediate section, less compelling and successful, due to a rhythm not always brilliant. I will be granted, but it is useless to tell you how important it is to have played at least To the Moon and A Bird Story before committing to the discovery of Finding Paradise, which, at the cost of losing so many important references, can however also be appreciated individually.

I played Finding Paradise shortly after finishing To the Moon, A Bird Story, and the other two spin-off episodes. The Kan Gao saga has been a fixture on my MacBook for weeks: blankets, lights out and headphones are the best way to enjoy the title. 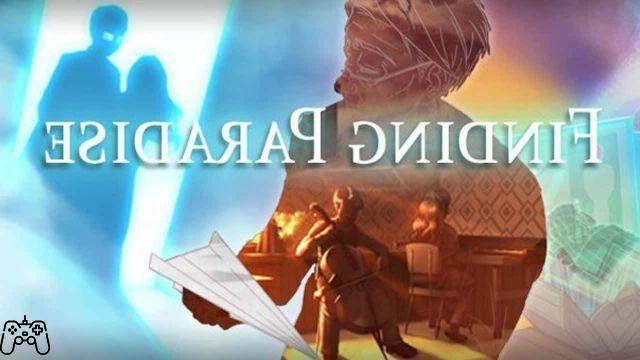 As for the gameplay, if you have even remotely an idea of ​​the title we are talking about, you will certainly know a fundamental factor: of purely playful Finding Paradise has little and nothing, leaving room for the intertwining of the plot and leaving out the rest. In fact, the player's intervention is limited to simple exploration phases, linked by a linear interaction with NPCs to unlock dialogues, in-game information and mementoes, tokens needed to switch from one memory to another.

This can hardly be blamed, given the nature of the adventure, but more could certainly have been done, especially in the face of seven years of development. However, in the last hour of the game even the most critical in this regard will find pan for their teeth, with some nice and well integrated mini-games, fully justified in the narrative development. In short, a rescue in the Cesarini area.

The graphic sector, on the other hand, remains quite similar to what has already been seen in To the Moon, with a simple and essential 16-bit pixel art, but very, very accurate as regards the animations of the characters and the management of the color palettes, perfectly married with the scenes on the screen (well lit) and with the splendid soundtrack.

In fact, Kan Gao here too does not fail to offer an excellent level OST, confirming his skills as a composer, as well as a game designer and storyteller, net of the important absence of actually memorable songs. The excellent tracks present, are then rather derivative from the first chapter of the series, with an inevitable feeling of already heard impossible not to perceive by the most attentive.

Essential and effective 16-bit realization, enriched by excellent management of lighting and color palettes. Some character animations are real goodies.

Kan Gao packs an OST of excellent workmanship, although not exactly memorable. There is a certain derivation from the excellent songs of To the Moon.

The playful aspect surrounds what is a splendid narrative, which makes introspection and sensitivity its center. The fussy eaters, like myself, will find the intermediate phase of the experience less inspired.