To complete the triptych of articles on the games that Ubisoft has launched on the market for the end of 2020, there is the review of Immortals Fenyx Rising, a title that has passed on the sly and seems not to have been a great success with the public. judging at least by the price drop practiced in record time by Amazon. The advertising exposure that the game enjoyed was obviously reduced and not being able to count on high-sounding brands like Assassin's Creed and Watch Dogs did the rest.

If we then add to the account as well the change of name in the race compared to the original God & Monsters with which it was announced and presented at E3 2019, things get even more complicated. So why have so many players and colleagues spent nice words for this cheerful and colorful production? We try to explain it to you in this review!

In such a difficult moment, the Ubisoft teams scattered around the world still managed to give players three very interesting and different productions, two of which could count on a more or less well-known brand. The tail, so to speak, of the Ubisoft-branded proposals was this Immortals Fenyx Rising, an adventure openly inspired by the beautiful Zelda Breath of the Wild - which, moreover, is a candidate to become the Game of the Generation - but which restores, in fact, to the inspiration alone the similarities with the Nintendo masterpiece. Comparing the two games would in fact be unfair, wrong and improper: the productions have always had different ambitions and if we want, even the model player target is quite distinct.

A fun adventure, in the true sense of the word.

Ubisoft is often associated with the role of simplifying the models and peculiarities of some videogame genres, as if they were the result of an assembly line, which proceeds undeterred to polish the 'roughness' of third-party productions. The purpose is clearly to succeed propose a game formula that already exists to the widest possible target on the market (and this does not necessarily mean in productions external to Ubisoft itself but on the contrary, the inspiration is often the result of collaboration between the internal teams, ed). In this specific case, the Ubisoft Quebec team has chosen to build an action-adventure like many have seen but they did it following the popular star of Greek comedy and mythology. An apt choice as never before because it gives the product a special character, as I had never seen before: playing Immortals Fenyx Rising means fighting against monsters and mythological animals, solve puzzles and puzzles that follow each other according to a well-studied difficulty curve and gradually more and more stimulating but, above all, it means playing with a smile on your face.

Before proceeding further, I would like to clarify what I said a little while ago, when I associated the idea of ​​a videogame 'simplificator' with Ubisoft. Well, simplifying means making it simple or simpler, agile and functional (thanks Treccani, ed) and this is not to be understood as a defect regardless. If on the one hand the negativity of the concept of filing a video game to standardize it and therefore more appreciated by everyone can be accentuated, at the same time it would be foolish not to remember how through a simplification some people can gradually reach complexity.

It is as if it were a form of contamination - another term used erroneously with a negative meaning - which allows you to produce something new, unpublished. In this sense Immortals is an ambivalent game because it manages to bring together two natures: the first, which I would define simpleton, almost comparable to a mobile game that we could find on Apple Arcade and which, with all the dignity it deserves, must however come down to compromises with regards to the combat system and progression management. And here we have a rather banal gaming hub, albeit declined in mythological sauce, which knows already seen as it offers the classic progressions that we would expect from a game of this kind such as life, stamina, equipment, transport skills and so on.

For all players, from the youngest to the oldest.

On the other hand, in addition to the not inconsiderable value of being able to tell Greek mythology in a funny and nice way even to a younger player or player, the game offers a series of more complete and multifaceted contents to satisfy the most accustomed players. to the genre. Starting from the maximum difficulty level that will require you to work more carefully on the construction of your character and equipment, there is the Board of Heroic Assignments of Hermes with cumulative missions and daily tasks and a whole series of secrets to reveal, mini bosses and Riddles in the Crevices to be completed (very close, this time seriously, to the style of the Shrine of Zelda). The style of play, it goes without saying, can be totally manipulated by the player through the choice of weapons to use, the upgrades to be applied and the potions to be created in Circe's Cauldron.

The crowning glory of a custom play style is achieved by unlocking Divine Effects (also reproduced by Dualsense) or real special moves designed to accommodate the player and his approach to combat in ways that are also quite creative. Less creativity is instead required of the user to progress in the adventure which, despite the world being open, is divided into four macro-areas or regions, each of which corresponds to one of the Gods to be released in the fight against Typhoon. Four regions for four main storylines to follow, four observation points to unlock the map, four blessings to receive and many missions and side activities.

Immortals Fenyx Rising… you have a funny face!

The style of the story and the tone chosen by Ubisoft is really nice and captivating: the voiceovers that accompany our adventure from the beginning, intervening as hard as they can at every useful moment, are those of Zeus and Prometheus. The two, as well as in perennial conflict, will never disdain comments and opinions on the characters and on the events that are happening on the screen. It is a nice idea, also functional for the purpose of telling what are the conflicts and personalities of the Gods, seen in contrast not only with respect to the world of men. The adventure therefore appears smooth also from this point of view and, net of the narrative interludes represented by animated drawings with a very childish and obviously low budget trait, it is appreciable.

I played Immortals Fenyx Rising thanks to a code sent by Ubisoft Italia for PlayStation 5: I completed the adventure in about twenty-one hours of play, leaving behind some secondary missions to complete and various improvements and skills to be unlocked in the New Game + such as puzzles and challenges scattered around the game world. 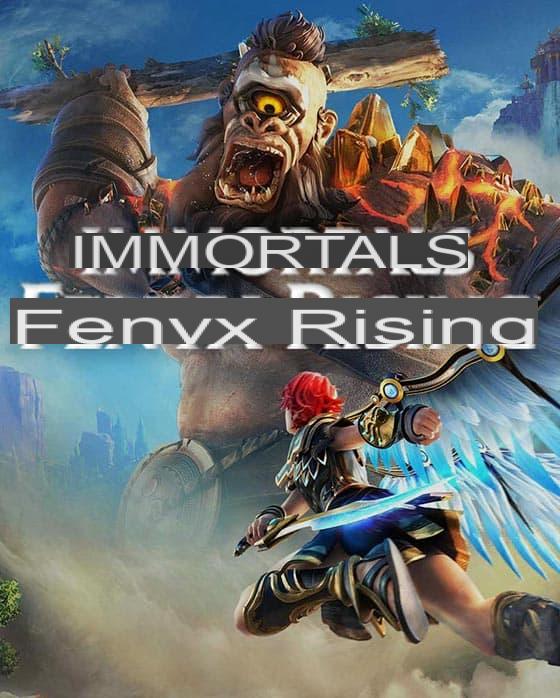 On PlayStation 5, in addition to the support of DualSense, the game offers two graphic styles that vary in effects and particles (there is no Ray Tracing) and also translates into a choice between 60 and 30fps. Personally, I started the adventure and continued preferring 30fps as, after a brief parenthesis at 60, I did not consider that kind of fluidity necessary for a combat system that is all in all simple and easily tamed; I therefore preferred the Quality mode, undoubtedly brighter, with a wider rendering distance, more defined shadows and a more faithful and satisfying color palette.

The versatility of Immortals Fenyx Rising is undeniable: the game manages to entertain with its funny narrative pace and thrill, thanks to numerous pieces of equipment to unlock, aesthetic improvements and increasingly difficult puzzles to solve. To increase the load there are also mounts, helpers and weapons that enjoy a lot of original and captivating aesthetic variety. The tones of the story and the simplicity of the combat system make the title suitable even for the little ones (PEGI 12) and perhaps, why not, also educational thanks to the charm with which the Gods and the world of Greek mythology are told.

Soundtrack that fades into the background and hardly ever shines, instead excellent dubbing and centered in full.

Sympathetic, fun and outgoing. As we go forward it becomes more complicated, with many key combinations including backbones, presses and special combos.

Did you like the article? Share it!
Audio Video Immortals Fenyx Rising: A Fun Adventure But Don't Call It Zelda!
How to get a Furfrou La Reine coat in Pokémon Go ❯

add a comment of Immortals Fenyx Rising: A Fun Adventure But Don't Call It Zelda!