Author and references
One of the coolest features of Nintendo Switch, as you have already noticed for some time, it is his hybrid nature, capable of enhancing products which, if limited to "domestic" use, may not be appreciated in the same way. It is the perfect example Sky Force Anniversary, the latest incarnation of the famous vertically scrolling shoot 'em up, which decides to abandon the mobile market in an attempt to conquer the audience linked to consoles and the PC. After arriving on Steam, Apple TV, PlayStation 4 and Xbox One, it is now the turn of the Nintendo flagship, which boasts a type of use more similar to the original market of the branded title Infinite dreams. But will a title with a strong eighties declination be able to fully conquer us?

WHO NEEDS THE PLOT?

Given its nature as a vertically scrolling shoot 'em up, Sky Force Anniversary doesn't even try to come up with any story behind our actions. No villains from Machiavellian plans, no bosses from the past of our protagonist (who will always remain nameless) and no motivation to save castaways other than the mere reward in the form of points once the level is completed. Let me be clear: this is absolutely not to be considered a defect (we're not talking about a Naughty Dog title), but it still felt right to point this out to you. We come to what is the core of the whole Infinite Dreams game: the gameplay. The aim of the game is to cross the nine levels that make up this new incarnation of Sky Force, for earn as many points as possible. Each level, in fact, has four objectives to complete (beyond surviving, of course): rescue all the castaways, exterminate 70% and 100% of the enemies and overcome the whole area without taking any hits. For each of these missions that we will be able to complete we will be given a medal, which is essential to unlock the next levels and thus continue the adventure. If, on the other hand, we manage to complete all four requests, we will be able to access the “difficult” difficulty of that level, with the same objectives to be accomplished. Furthermore, the thing can be repeated further to unlock an additional difficulty, but we warn you: prepare the calendar with the saints to be evoked. The concept of "repetition" is omnipresent while playing Sky Force Anniversary; as it is only by repeating the levels (and defeating the enemies) that we will be able to earn the stars necessary to unlock new parts for the spaceship and to upgrade those already assembled. This perennial grinding could be annoying and repetitive in the long run, but this is where the hybrid nature of Nintendo Swtich comes to us. Playing a quick game while in the bathroom becomes a fun pastime, a far cry from having to start the game on our PlayStation 4 and / or Xbox One. The speed with which it is possible to tackle the levels, in fact, goes well with the portability of the last console of the great N, going to to thin the detachment coming from the evidently mobile origins of this Sky Force. We do not doubt it: sooner or later you will get tired of repeating the same nine levels anyway (even with their three different difficulties), but we are sure that you will remain a long time with your hands attached to the Joycons. The title of the Polish software house, in fact, is extremely fun, especially for those who grew up on bread and arcades. There myriad of shots on stage and satisfaction felt once the classic end-of-level boss is defeated manage to create a considerable dependence in the player, managing to slip under the skin and transmit the adrenaline even once the console is turned off.

From a technical point of view, Sky Force Anniversary turns out to be a feast for the eyes, especially in portable mode. The polygonal models of the characters manage to convince, although the mecha design of the aircraft certainly does not shine for innovation. What is surprising, however, is how the graphics always manage to be clean and capable of not weighing down the screen, which at the highest difficulties (but not only) will be able to fill up with bullets to avoid and objects / points to recover. The soundtrack, with a strong eighties taste, is also of a decent level and absolutely pertinent to the type of production proposed. It goes without saying that, in a product of this type, the total absence of frame drops and, in fact, the guys of Infinite Dreams have managed to bring a title completely free of any bug and / or technical problem to the Nintendo Switch screen. USEFUL INFO

I played Sky Force Anniversary in both mobile and docked versions, much preferring the first version 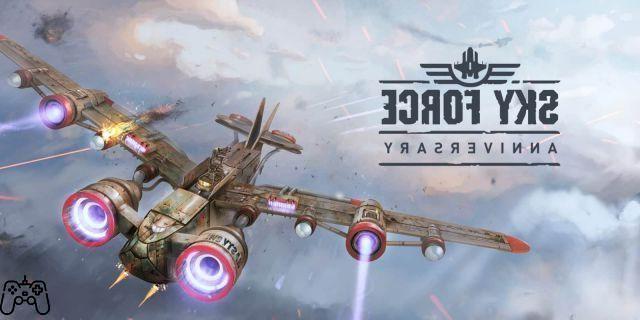 Sky Force Anniversary managed to convince us thanks to the perfect combination between the hybrid nature of Nintendo Switch and the clear mobile origin of the Infinite Dreams title. We had great fun to play the latest transposition of Sky Force created by the Polish team, especially in our long train journeys, where the game has been able to entertain us with its ever increasing difficulty. A good graphic and sound sector completes the final picture of a title that we advise you to recover. Review by Luca Mazzocco

Sky Force Anniversary appears colorful to see, clean in the technical rendering of the polygonal models and extremely balanced, always managing to remain comprehensible even during the most excited moments on the screen. The mecha design of the aircraft will not make you cry a miracle, but it is still functional to the type of product.

The soundtrack a fits perfectly with the shoot 'em up nature of Sky Force Anniversary, taking the player back twenty years, to the days of the cabinets. Sure, you might still get bored in the long run, but nothing lasts forever!

The real strength of the Infinite Dreams production is precisely the gameplay which, thanks to a well-calculated learning curve, grows in difficulty along with the player's skill. The nine levels that make up the adventure turn out to be very varied and, precisely with the increase of the aforementioned difficulty, they know how to keep the player's hands attached to the controller and their eyes firmly glued to the screen. In Sky Force Anniversary, death is around the corner and even the most trivial mistake can be fatal.

Did you like the article? Share it!
Audio Video Sky Force Anniversary - Live. Die. Repeat.
How to get Galar Slowpoke and Slowbro in Pokémon Sword and Shield ❯