Monkey Island was not only a great exponent of a genre, but a transversal title, played by large audiences, from fans to those who did not consider themselves players before meeting the work of Ron Gilbert, Tim Schaefer and Dave Grossman . And it is precisely the first of these to return to the market today with a graphic adventure created in the same way as those that depopulated between the 80s and 90s.

The golden age of the so-called "point and click" featured Monkey Island, but also many other projects that flourished around the SCUMM graphics engine, inaugurated with Maniac Mansion. The LucasArts style has thus become a classic, with the list of verbs and inventory objects, whose choice combined with the pointer allowed more or less complex actions and interactions between the protagonist and the surrounding environment, to solve puzzles and continue in history.

Thimbleweed Park wants to pretend that SCUMM did not retire in the mid-90s and in this he succeeds very well, presenting fans with a "point and click" with all the ingredients that have made Monkey Island a cult object: here is the interface of verbs and objects, the retro pixel graphics, the humor with surreal situations and characters conforming to that typical Anglo-American nonsense, but also an abundant quantity of quotations and self-referencing that continually break the fourth wall for wink at the user, reminding him of the classics of the past.
Some of these ideas are very nice and work well even if proposed to today's public (such as agents who evaluate the deterioration of a corpse based on the state of its pixels), while others are for the use and consumption of those who have lived as an enthusiast. 'era of graphic adventures (like Delores who rejoices not to be in a game in the Sierra, a competitor of LucasArts, stating that there the longevity was lengthened through the expedient of the spurious deaths of the characters and consequent Game Over and restart from the previous save ).
In the midst of this hilarious tone and the characters outlined in a picturesque way, however, a mystery remains to be solved: a murder consummated precisely in that of Thimbleweed Park. The narrative is divided by managing five protagonists: two FBI agents called to investigate (who remember their very famous television counterparts in the 90s ...), a very foul-mouthed clown, a ghost and a girl whose dream is to work as a programmer of video games. It is then up to the player to follow the amusing events until they find the connection, showing how the plot has been curated and offers a non-linear, but intriguing and smooth development, making great leaps forward, almost without realizing it, while busy solving puzzles. and smile for yet another odd idea.

In terms of playability, some aspects have been smoothed out to make everything more accessible: it is possible to speed up the movements of the characters to reduce downtime and the construction of the action is rather streamlined. We go from selecting a verb, an inventory object or something / someone to interact with, according to the typical scheme of SCUMM, with an apparently cumbersome procedure, but in reality easier than it seems and applicable in very quick steps.
Two modes have been included: the first, Casual, contains simplifications to the puzzles and was designed for newbies who have never played a title of this type before, a sign that Gilbert has not neglected the contemporary audience.
The second, Difficile, instead is aimed at veterans, those used to racking their brains for hours and trying every possible combination in order to move forward and find the right solution to the enigma of the moment.
The puzzles are the trademark of this videogame school, bread for the tooth of riddles consumers, sometimes easy, sometimes complicated, but effectively inserted within the narrative, often becoming an expedient to justify very successful comic skits, gratifying those who solves them.
Despite a (due) simplification with respect to the abstruse logic often used in the past, the reasoning e puzzle solving remains a central component and their mere presence underlines a very important difference with the genre that has supplanted point and click: that is, TellTale-style cinematic adventures. In the latter, playability has been totally suppressed in favor of a completely guided and cinematic narration, where the user finds himself / herself as a spectator rather than a player, because he / she is deprived of those options that made his contribution consistent. The only possibilities granted become very banal interactions with backdrops and objects or the choice of a few phrases, in a sequence so linear that the game ends up practically by itself.

Thimbleweed Park is available digitally for PC via Steam and GoG.Com. On consoles for Playstation 4, Switch and Xbox One. 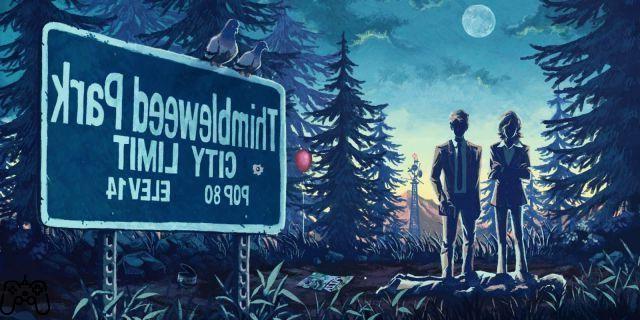 Thimbleweed Park instead brings back a neglected but very important factor, that is the work of the player, that role of helmsman and solver. which justifies a playful component worthy of the name and which removes any suspicion of being in front of a show rather than a real video game. Playing Ron Gilbert's latest work is a predominantly active experience, aimed at entertaining the user but also making him participate and decisive in its completion. The comparison with cinematic adventures is merciless, showing how a handful of pixels and a menu with words and icons can be more "video game" than many titles with millionaire funds, writers and realistic animations behind them. Thimbleweed Park represents a type of game that shows that it still has a lot to say in a landscape that has been simplified to the point of losing substance.

The pixel art used is deliberately a reference to the golden age of graphic adventures. Angular in some places, yet very accurate and full of details. An ideal sequel to the titles of yesteryear. The videogame equivalent of vintage that is trendy in the fashion world.

Although the soundtrack is not exactly the strong point and the call of the game, the dubbing is decidedly lively and helps to make some exchanges or some peculiarities of the characters even more witty. The mere presence of English audio, however, could make many users lose these subtleties. We therefore thank the excellent adaptation of Fabio-Kenobit's subtitles into Italian for making many linguistic puns understandable even in our language.

The presence of two game modes, for beginners and veterans, guarantees total accessibility to a title that does not already require particular playful virtuosity. The puzzles can sometimes test the logic and the enigmistic skill of most, however the overall experience is smooth and appreciated by any type of gamer.

Did you like the article? Share it!
Audio Video Thimbleweed Park
Can you play Pokémon Unite offline? ❯