When Mike e Josh Grier founded Ember lab, they probably didn't have the faintest idea that one day they would be able to create a title like Kena: Bridge of Spirits. Month after month, the company focused more and more on creating animated shorts, often working in the advertising field. After making deals with the likes of the Coca-Cola Company and MLB, the development team decided to attempt a one-of-a-kind production. A video game that allowed the duo to expand into a market capable of speaking a unique and "innovative" language.

Mike and Josh's extraordinary ability has always been to be able to turn their dreams into reality. Ember Lab soon formed a partnership with Sony Interactive Entertainment, allowing the team to reach 15 people and officially kick off the work of Kena: Bridge of Spirits.

Years of work (and a pandemic) later, we are finally proud to report our opinions on the first videogame project of this promising software house. In the last week we have spent many hours in the company of the young Kena, collecting all the Rot and completing the adventure 100%, in order to give you the most complete opinion possible on this title.

Before we begin, however, we remind you that the game in question is available on PlayStation 4, PlayStation 5 and PC, while on Xbox it is likely to exit once the time-exclusive contract is terminated. Obviously, keep following us so as not to miss any new information about it.

THE DELICACY OF THE WHISPER OF THE SPIRITS

The plot of Kena: Bridge of Spirits starts with an extremely simple pitch, but damn interesting at the same time. Kena is a young Spiritual Guide, that is a girl with the task of helping souls to pass to the other world. All very simple, except that some souls appear more stubborn than others, deciding not to follow their destiny and planting roots in the material world. "Roots", a term that we did not use casually, given that these spirits take on very marked natural connotations, merging with the ground to give life to terrifying creatures that mirror their psyche.

Kena will therefore find herself forced to investigate the disappearance of an entire village and the main figures who have lived there. We do not want to go deeper into the plot, to avoid ruining the experience for all those who decide to trust the work of Ember Lab. However, we can say with certainty that we were satisfied with the narrative created by the Californian team. A narrative that perhaps starts in a fragmented way, but which gains substance as the adventure progresses. If initially you are not able to fully understand the actions of the Spiritic Guide, meeting the various villagers everything will be clearer, until the inevitable final confrontation.

Kena: Bridge of Spirits is a delicate title, which pays little attention to the protagonist, but who prefers to focus on her relationship with the game world. A choice that will make you fall in love with the girl thanks to her looks and her micro-expressions

The main storyline can be completed in about eight to ten hours, but it took us almost triple to find every single collectible scattered around the four macro-areas of the game. We advise you, in fact, not to tackle the story in one go, but to slowly immerse yourself in the world created by Ember Lab. A world made of details, bright colors and many (many) objects to collect scattered around the map. Depriving yourself of this playful choice means depriving yourself of one of the main activities that you will find yourself carrying out once the game is started. And, trust me, you may regret your decision once your forest journey is complete.

THE INCONSISTENCE OF CONSCIOUSNESS

We come to what, for many, may be the most objectionable aspect of Kena: Bridge of Spirits. We do not hide it: the gameplay of the Californian studio's first title is extremely simple. "Simple" not as regards the difficulty, which as we will see manages to give a good level of challenge to the player. "Simple" in terms of complexity, as our heroine has few moves to learn and a frighteningly bare skill tree. If you are a regular player of the platform genre and also chew the third-person action, you will not find anything in Kena's gameplay that will amaze you. The impression is that of having gone back in time almost twenty years, when Naughty Dog reached the shelves with the first Jak & Dexter and this, for some, may not be in step with the times.

Obviously we have no intention of masking the banality that surrounds some sections of the game, as we have no intention of postponing a simplistic, however functional, combat system. We highlight, however, how these defects are partly weighed by a successful level design and by a correct distribution of upgrades and skills during the adventure. With a precise and well-marked rhythm, the player grows and improves their skills together with those of the Spirit Guide, facing increasingly powerful enemies.

As mentioned above, the title maintains a good level of challenge, resulting even "complex" in a couple of clashes. Nothing insurmountable (indeed), but it is a feature that we appreciated and that added a bit of panache during some game sessions

Kena: Bridge of Spirits amuses and entertains in its simplicity, proving that to make a good title it is not necessary to exaggerate. We do not find it hard to believe, in fact, that the next work of the developers can go to further explore the playful aspect, in an attempt to create a more elaborate title, but one with the stability gained with this first experience in the sector.

THE TASTE OF ANIMATION

From an artistic point of view, Kena: Bridge of Spirits is a half miracle, but behind which there is a lot of cunning. The graphic impact is really successful, with an extremely refined character and environment design, which fails to hide the ability of some Disney animators hired by Ember Lab. At the same time, however, the environments are extremely repetitive and we would certainly have preferred to see a greater difference between one area and another. Furthermore, the interactions with the objects of the scenario are almost reduced to zero, making the game world a magnificent picture to observe. The cut-scenes, on the other hand, are completely impeccable, making us wish we could soon witness a transposition of the story of Kena to the cinema.

On the sound front, the game offers a remarkable soundtrack, with a sweet main theme capable of slowly creeping into our ears and into our hearts. Despite the subtitles in Italian, the dubbing remained in English, also showing some uncertainty in the voice of some secondary characters. A defect that we could have filed with a complete localization, which would have allowed the title to gain a trait close to those of animated films.

We played Kena on the PlayStation 5 and, despite some more pronounced vibrations than the DualShock 4, Ember Lab was unable to particularly implement DualSense. A choice that, apparently, many seem to want to follow, but that we would not have expected from an exclusive temporal product for the new Sony platform.

We played Kena: Bridge of Spirits on PlayStation 5, taking full advantage of its features. Despite the cleaner graphics sector and the higher resolution, the Ember Lab title is perfectly usable even on the last generation Sony console. 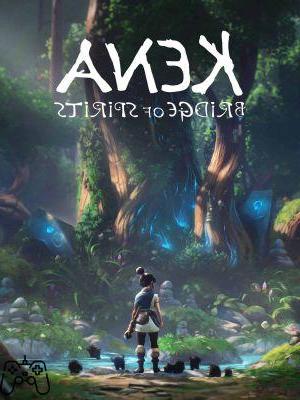 As you may have understood, Kena: Bridge of Spirits is a more than valid work. It is certainly not the masterpiece that some might have expected, but it is a splendid first test for a team that, we are sure, will be able to give us great emotions in the future. For our part, we can't wait to see Ember Lab use the excellent technical base set up with this title, and then work more on the playful and narrative sector. If you love platformers and are attracted by the superb character design, don't think twice and spend the € 39.98 needed to buy the game without batting an eye. If, on the other hand, you are looking for a structured product with captivating gameplay, perhaps you would do better to scale back your expectations and get closer to this work with greater attention.

From an aesthetic point of view, Kena: Bridge of Spirits brings out magnificent scenarios and a character design that is undoubtedly very inspired. By carefully analyzing this aspect, however, it is evident that the environments are repetitive and that there is little interaction with the game world. Nothing dramatic, but it is undoubtedly technical limitations due to the small team behind the production of this title.

As for the sound sector, the title defends itself very well with a truly successful atmospheric soundtrack. The main theme fascinates and has the potential to be declined in different ways in future productions, while maintaining a unique and double-knotted distinctive trait with this first Kena adventure. Slightly different speech for the English dub, good, but unable to surprise particularly for the interpretation of some secondary characters.

Certainly the "sore" point of production. Kena: Bridge of Spirits works, but it doesn't exalt from a playful point of view. An excessive underlying simplicity and a mediocre combat system are however supported by an inspired level design and a constant balance of situations throughout the main campaign. Nothing that has not been seen in the last twenty years of this kind, but which still allows the work of Ember Lab to emerge with dignity.

Did you like the article? Share it!
Audio Video Kena: Bridge of Spirits, an adventure between life and death
All Medicham's weaknesses and the best Pokémon counters in Pokémon Go ❯

add a comment of Kena: Bridge of Spirits, an adventure between life and death