Where were we? In space, near Mars, over two hundred million kilometers from Earth. A real sidereal distance compared to the few tens of kilometers that separate England from the beaches of Normandy. Call of Duty, after more than five years with an eye to the future, which many consider indigestible, returns to where it all began, with its feet firmly on the ground, back in 2003.

WWII then (re) brings us to the western front making us relive the race to the Rhine at the end of the Second World War. A hyper-abused setting, which we have come to know through all possible media in recent years, but which thanks to its recent absence from our screens (except for niche or free-to-play titles based on tanks) is all in all “Fresh”, not only for the younger players, but also for those like me who had made the big leap to Omaha Beach sixteen years ago, in the Medal of Honor of 2015 Inc. So it's back home, where it all started.

The same thing cannot be said for the staging of the campaign, although Sledgehammer Games tries them all to diversify and make its dynamics more airy and varied. WWII here gives way to the mortal sin of all Call of Duty, a sense of constant deja vu, balanced however by a good rhythm and the usual hyper kinetic direction to which the series has accustomed us. This does not mean that the campaign does not work or works little, far from it, but that the sense of wonder, although teased by a very high level cosmetics, can fail. As if to say, the "usual" defense of the trenches, the "usual" silent mission, the "usual" mission on vehicles in a context that is all in all "familiar". The developers undoubtedly took this sensation into account, consequently inserting variations on the theme designed to make the hours spent alone as different as possible. Succeeding in my opinion only half way through. However, an applause must be made to the choice to go beyond the trite re-proposition of the abused infiltration of the opponent's field, in favor of decidedly particular settings and situations, new for the series.

The dynamics are total stealth, there is no space to reach the goal otherwise, and this can lead to trial and error situations, despite an artificial intelligence not exactly at the levels of stealth production proper. A good attempt, decidedly "choreographic" but which is all in all decidedly detached from the character and general tone of the campaign. Better in this sense, for example, the battle aboard the Sherman, perhaps a little too long, but electrifying, well thought out and with a decidedly high challenge rate.

Unfortunately, however, the WWII campaign loses a bit of its compass and proves that it does not have the "shot" of the first two chapters of the series (not to mention World at War) in the choice of wanting to tell the personal stories of the protagonist, then to insert a story within history, the one with a capital S. Despite the presence of numerous supporting actors, of scenes where the relationship of brotherhood between the various comrades is made explicit, empathy never triggers, resulting on balance one more than you did not feel the need at all. The mission counts, not who takes part in it we could almost say. The pace drops dramatically and he can't wait to get back to pick up a gun and fire. Pad in hand the gunplay is the usual one to which the franchise has accustomed us, the only note I feel I have to make is that in the initial stages, including landing, the game is a bit too "compressed", the battles are not like that airy and wide-ranging as they should, all in the name of artificial intelligence, which, as previously written, is certainly not exemplary. However, when, in the second part of the campaign, the spaces widen, Call of Duty: WWII literally explodes, giving us heart-pounding missions, and that sense of reliving history that seemed a bit hiding at first. Without forgetting that the lack of automatic energy regeneration cancels one of the key mechanics of the series, effectively eliminating the safety of a shelter. In short, you never stand still, the medikit must be requested and used. Here too, in short, it is a return to the roots of the “unsettling” but definitely functional series.

Where, however, this new Call of Duty has brought everything into play is obviously the multiplayer component, given the obvious lack of all those hyper kinetic dynamics of the last chapters from the science fiction setting.
Without fear of being proven wrong, I can say that Sledgehammer Games' bet has been won.

Avid fans of double jumps, wall runs and slides can sleep soundly. WWII has lost nothing in terms of pace and speed of play, the playful heart has remained unchanged, with the usual time to kill reduced to the bone and a "light" and rewarding ballistics far beyond certain realistic details. It is always a question of speed and reflexes, even if there are no homing missiles, lasers or machine guns with a rate of fire tending to infinity. The matches are therefore "more readable", always spectacular even without circus numbers to keep us company. The excellent level design, offers maps that make us visit iconic places of the Second World War, with battlefields perfect for all types of players, both those who prefer medium-long distance engagements and those more accustomed to close combat. Nothing new under the sun then, but the usual ability of developers to create maps that do not displease anyone, never trivial having to be "medium", always full of tactical ideas for every type of player.

As if that weren't enough, Call of Duty: WWII definitely distances itself from its precursors thanks to the introduction of the interactive pre-match lobby called Headquarters, conceptually similar to the Destiny tower. The view passes into the third person: from here it is possible to accept daily missions, try the score streaks (obviously WWII themed, but effective in the same way as the modern ones), engage in small one-on-one challenges and choose the division to which they belong, or the new classes designed for this episode. There are five of them, each with a certain type of armament and specific equipment tailored to how it was decided to interpret the multiplayer component. For example, the Infantry (rifles) is equipped with a bayonet, and as you level up, it unlocks an additional main accessory, extra magazines, or increased speed in scope mode. It is possible to change division on the fly between one death and another, there are no weapon restrictions, it being understood that the "class" accessory will remain linked to the original division. No bayonet on sniper rifle, or machine gun mount on shotgun. A different customization in the form, but rather similar to the past, that works and does not undermine the ambitions of the players.

However, where WWII leaves its mark is with the unprecedented War game mode, a frenetic and long game divided between attack and defense, impersonating both factions in turn. Team play is the fundamental prerequisite of this mode, much more necessary than the classic objective modes. Assaulting a station or defending it, this is the essence of the game, all in generously sized maps, specially designed for this mode, with a different design from the standard ones, without obviously altering the typical feeling of the pad in the hand of the series.
The rest of the content of the multiplayer package is traditionally nice full-bodied, with all those types of games that we have come to know over the years. Here, too, everything as per the manual, without any particular smudges and with Killing Confirmed which is confirmed (excuse the pun) as usual, very funny.

To close the game offer there are then the Nazi zombies, a real classic, which year after year has been able to conquer more and more players, thanks to a nice challenge rate, high replayability and easter eggs scattered around the maps to return. survival even more mysterious and thrilling. If possible everything is even darker, bleak and scary than the latest releases, but also a more usable thread to help newbies to the mode. Attention, this does not mean that Nazi Zombies is less demanding, easier in short, but only less "cryptic". Graphically speaking Call of Duty: WWII is undoubtedly a pretty sight and compared to the latest editions it seems to count on a more solid polygonal count, on wider scenarios and on an overall greater "environmental destructibility". What struck me most is the usual videogamingallday.com work on the motion capture of faces, the maniacal detail in the accurate reconstruction of the historical setting and the usual, amazing direction capable of effectively immersing us in the horrors of the Second World War.

I played Call of Duty: WWII on PC 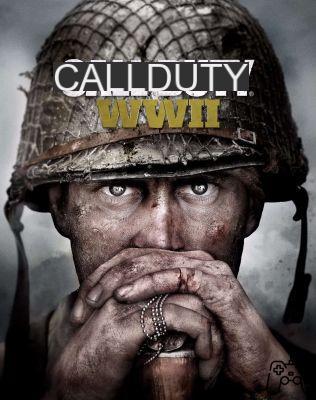 Call of Duty: WWII therefore marks a nice return for the series where it all began, offering a gaming experience that, despite being basically always the same as itself (and could not be otherwise of course!), Manages to be decidedly "Fresh" thanks to a multiplayer that has not lost its polish at all without the futuristic circus numbers of the latest editions and to a zombie mode as usual terribly long-lived and satisfying. The countryside is perhaps the only sore point: all in all good, but without particular flashes, the result of the desire to tell a personal story that was not really felt the need.

Call of Duty: WWII shows us the horrors of the last war without sparing us anything: we are often left speechless thanks to textures and special effects of great level.

Evocative music and good dubbing, as per the textbook. Nothing to complain about the sound effects, but we're still a step below the capture work done in Battlefield.

The "old school" multiplayer works great and does not make you regret the latest sci-fi editions. The campaign is only good. Thumbs up for the usual unintelligent artificial intelligence.

Did you like the article? Share it!
Audio Video Call of Duty: WWII
The Elder Scrolls V: Skyrim Guide - Part One ❯