The latest work by Wadjet Eye and Dave Gilbert (a surname, a guarantee, in terms of graphic adventures) it's "A Hangover" by point-and-click, a journey back in the life of an actor to discover the perversions, manias, aims of the spirit that have possessed us and pushed us to perpetrate heinous murders and psychological manipulations throughout New York City. The same Big Apple that experienced the wave of paranormal activity resolved by the medium Rosangela Blackwell and Joey Malone, today threatened by demons and other amenities that have found in this melting pot of humanity ambitions, dreams, imbalances with which to fertilize the fertile soil of their power . A fantasy thriller with pulp implications, also capable of great moments of comedy thanks to phenomenal performers, virtual character actors supported by a script from the other world, as per the tradition of its creator, capable of imprinting itself in our memory; the Unavowed, paranormal police composed of wizards, geniuses, mediums and an unnamed protagonist (and whose work will be chosen among those always available by us, thus generating a background in its own right capable of influencing the rest of the story) exorcised freshly, the only one not to be dubbed. An alter ego that will express itself exclusively through the lines of text selected by those who have the mouse in hand, stylistic choices at first unsettling, questionable, almost annoying, especially for one who hates "dumb" characters, but who will unexpectedly find meaning in the drawing by Gilbert, a surprise that alone is worth this umpteenth trip to the shadow of the Empire State Building, where everything will show itself to those who are not afraid of the truth.

A metropolis constantly tormented and prodded by the rain, oppressed by clouds of a rotten orange, gloomy yet magnetic, fascinating. That typical charm of esotericism, of the occult, which will accompany us on the trail of those who used us as a shell, discovering neighborhood after neighborhood, one tormented soul after another, the brutality of the machinations hidden by our face, in what is an exquisitely two-dimensional detective adventure, much talked about, even in its gameplay particularly dependent on our choices, with immediate or future consequences on the development of a semi-linear narration, without quantum dreamian claims, more circumscribed and therefore extraordinarily coherent, even in the individual dialogues. Reading and listening to the splendid English dubbing (the only one available, excluding our language also from the subtitles) is a twelve-hour long pleasure, in terms of rhythm and level of interest in the story (very high and continuously growing), interspersed with an enigmatic system very classic, Broken Sword style, totally based on the logic of everyday life rather than on typical video game forcing. The real peculiarity lies in the powers, in the abilities and personalities of the characters who will gradually form our team: the magician Eli Beckett, the half genius armed with a saber (not Shantae) Mandana, the former detective Vicky and the medium Logan, accompanied by the ghost of the very nice little KayKay, ten years old.

Unavowed stages an exceptional cast, including protagonists, antagonists and extras, linked by a script of extraordinary workmanship as only Dave Gilbert can write.

The ingenious game design trick is to let us choose only two at a time to take on missions, without the possibility of changing them once you get off the subway, thus drastically changing the way to untie the knots that will be created around the story. All this happens blindly of course, without many clues as to what we will find in front of us, also pushing, why not, on replayability. What is surprising, once again, is the coherence of the events, the way in which the chosen characters will interact with each other and with other people; more condescending cops at the sight of ex-colleague Vicky, ghosts only Logan can talk to, lies that only Mandana's djinn instinct can expose, and of course Eli's sagacity and ability to manipulate the flames, which he always does. comfortable. A mechanic reminiscent of the very particular Resonance (published by Wadjet Eye and developed by Vince Twelve) and its continuous whirlwind of performers, combined with the teamwork between Rosa and Joey in The Blackwell series. Of course, the game occasionally puts us back on the right path, creating a context where a given character is mandatory for the story, but keeping us in the dark until the right moment, and then implementing the exchange with an exceptional class and delicacy, without imposing it on us. at the beginning of the mission, without making it appear pretentious.

It is a well-kept work, in the writing of every word and twist, in the freedom of every decision and in every line of dialogue chosen in the role of the protagonist, as well as in his minimal aesthetics, with hand-drawn backdrops and dotted characters in an elegant pixel art in the modeling , especially of the various extraterrestrial creatures that we will meet, dragons, muses, dryads, mermaids, a little less in animation. The whole releases a bouquet of strong personality and scenic sense, very theatrical in its two-dimensionality (and in perfect harmony with the past as an actor chosen for my game), embellished with jazz tracks that enhance its vintage soul and its exceptional good taste. . Never frustrating or artificial, accessible and very enjoyable even by those not accustomed to the genre or the world of video games in general, as if it were a beautiful book or an excellent TV series, hoping that the events of Unavowed have followed in Gilbert's plans, a character who despite his niche is establishing himself as one of the most talented game designers and writers on the square, like the namesake Ron, Schafer, Cecil and Sokal.

I enjoyed Unavowed thanks to a Steam code kindly provided by the developer, reading thousands of lines of text, loving every letter and becoming fond of unforgettable characters. Eli's inner conflicts and his family memories, the Olympic calm and sincerity of Mandana, Logan who managed to defeat the demon of alcoholism, little KayKay who accepted with serenity his condition as a ghost and Vicky, aggressive, stubborn , foul-mouthed and ready for action. 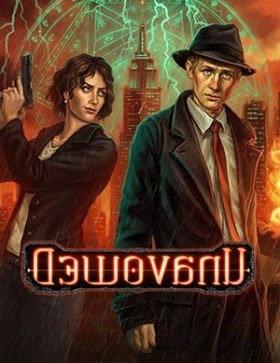 Apart from some rare puzzles a little phoned and already seen sincerely, I found no other defects in what is in effect one of the best point and click of the last ten, fifteen years, perhaps even ever, for enigmistic taste, writing, character and consistency. Perhaps it lacks the emotionality of The Blackwell, a series of five episodes pampered and perfected by Dave Gilbert over eight years of work, but recovering in rhythm and chorality, fascinating with its esotericism and its sensational Del Toro fantasy-gore verve, without fear of showing violence and brutality, hitting hard with intense and moving scenes, bringing to the screen themes such as loss, greed, fatherhood, social unrest and moral dilemmas of those who stare at the screen for ten minutes without having the courage to click the left button , easing the tension with high school gags and an overall vibe where the spark from the original Ghostbuster still shines. The resurrection of graphic adventures has definitely found its permanent center of gravity.

Aesthetically very rich in personality and taste despite its undoubted minimalism, mixing drawn backdrops and characters in pixel art, which however in movement return a "puppet" effect that can be improved. New York is beautiful, wet, decadent, esoteric, one of the best Big Apple in the gaming world.

A commendable, extraordinary dubbing work, for how the actors have managed to interpret a fantastic writing work, all caressed by a mainly jazz soundtrack that combines each element in an indissoluble marriage based on the principles of elegance and class. Tracks ready to give way to a sound design full of tension for the most important and heinous moments, creating anguish and never disappointed expectations. The English used is quite colloquial, understandable even for the less accustomed to the language.

On the skeleton of Broken Sword and disciples, a very classic graphic adventure in its virtuous circle of logical use of objects, environmental elements and multiple choice dialogues, broken by an almost role-playing structure, in which to choose the members of your team and exploit their skills , to solve structured puzzles to have more solutions based on the choices made. Very intelligent, exciting, satisfying and perfectly integrated into the narrative fabric, perhaps never better than this.

Did you like the article? Share it!
Audio Video unavowed
Everyone in the ring with the WWE 2K19 review! ❯